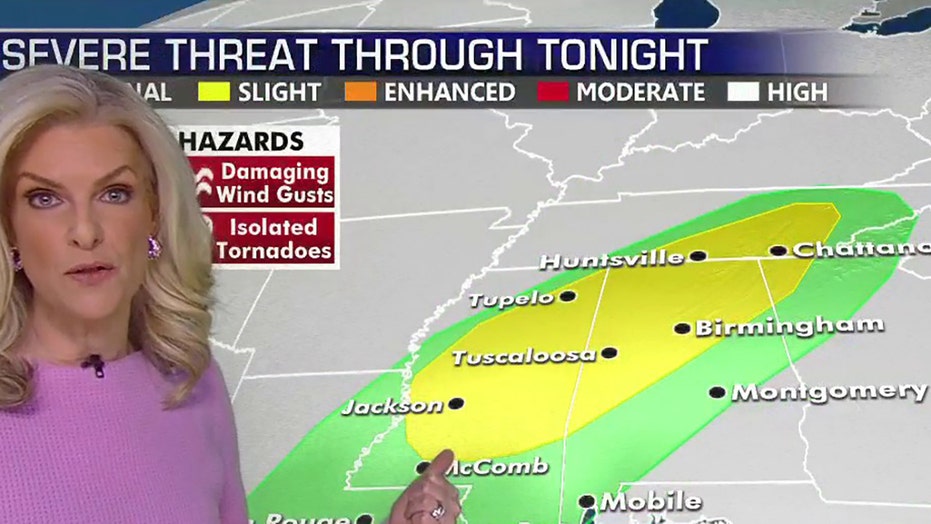 Heavy rains threatened the South again on Wednesday as a system moving east brought potentially severe storms to a region with rising rivers that already are sending fish onto people's property.

The National Weather Service said the greatest risk for severe storms through Wednesday night will be from the Tennessee Valley to the Gulf Coast, with a moderate risk of excessive rainfall from northern Mississippi to central Kentucky until Thursday morning.

"We have big-time flooding across the South, the Mississippi, the Tennessee, Ohio River Valley," Fox News senior meteorologist Janice Dean said on "Fox & Friends." "This has been a problem over the last several days and you can see where we have flash flood watches and warnings stretching from Northeast Texas all the way up toward West Virginia and Ohio."

FLOODING REPORTED ACROSS SOUTH AS HEAVY RAINS CAUSE LEVEE BREACH IN MISSISSIPPI, COP HURT IN CRASH

According to the NWS' Weather Prediction Center, much of the Gulf states and areas north into the Tennessee Valley and Southern/Central Appalachians are at 300 to 600 percent of normal rainfall due to above-average precipitation recorded in the past two weeks.

The threat for flooding continues across the South on Wednesday. (Fox News)

Flash flood watches and warnings and flood warnings stretched from eastern Texas through West Virginia on Wednesday morning. The NWS said the Tennessee River was predicted to crest about 7 feet above flood level at Perryville, Tenn., on Sunday.

Heavy rains in Alabama led to multiple flooded or washed out roads after rainfall exceeded 6 inches. The Pelham Police Department shared photos of flooding in the area, located south of Birmingham.

One man who lives outside of Birmingham made a surprising discovery Tuesday, finding fish on his farmland. In a video posted to Facebook, Joseph Lee Bethune described how the weather scattered items around the property.

"What the hell," he could be heard saying in the video. "We got dead fish floating up."

Near Great Smoky Mountains National Park in eastern Tennessee, rock and soil slid off a 70-foot hillside and blocked the northbound side of a U.S. 441 spur linking the tourist towns of Gatlinburg and Pigeon Forge, the National Park Service said.

At least 45 dump truck loads will be required to clear the road, officials estimated, but no injuires were reported.

In eastern Mississippi, officials in Starkville said the water at Oktibbeha County Lake once again reached a critical level just weeks after heavy rains caused a mudslide that put the earthen dam in danger of failing.

Pumps have been used to lower the lake level by about 8 feet since mid-January, but officials said the water was even higher than before because of recent storms.

Officials also were monitoring a potential dam failure in Yazoo County, where the Mississippi Emergency Management Agency said a 40-acre lake in a subdivision was leaking around a culvert and washing away dirt, threatening four homes and a church. Five homes were evacuated after a levee breach in Leake County.

Besides the flooding threat, forecasters warned about severe storms possible throughout the region.

The threat of severe storms across the South on Wednesday. (Fox News)

Isolated tornadoes and winds in excess of 60 mph are possible in some areas of the South after nightfall Wednesday, according to forecasters.