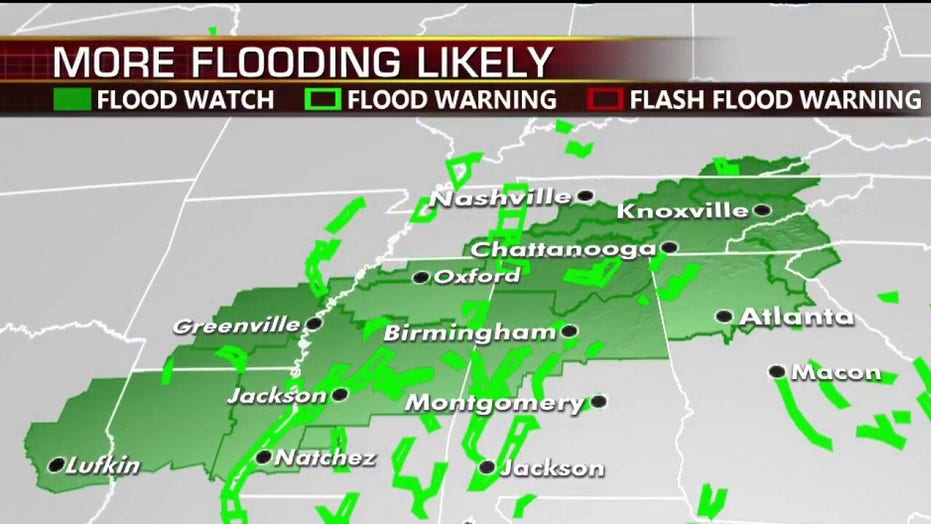 A stormy start to the week across much of the South on Monday is bringing the risk of widespread flooding by Tuesday and Wednesday, according to forecasters.

The National Weather Service said that several rounds of heavy rainfall and severe storms will track across the South through midweek, bringing the risk of "dangerous flash flooding."

"Much of the country under some kind of weather alert," Fox News Senior Meteorologist Janice Dean said on "Fox & Friends." "We have flash-flooding potential across the Mississippi River Valley, in towards the Mid-Atlantic. And then north of that, that's where we're getting the snow."

According to Dean, a stalled front will focus heavy rainfall that could lead to flooding across the Mid-South, up toward the Mid-Atlantic.

Heavy rainfall is in the forecast through Tuesday across parts of the South. (Fox News)

In addition to the flooding, strong to severe thunderstorms will also be possible from Texas to central Mississippi through Tuesday morning.

"So that's going to be a problem over the next couple of days with several inches of rainfall," Dean said.

The NWS's Weather Prediction Center said that moisture from the Gulf of Mexico will create an environment that is conducive for periods of moderate to heavy rainfall, especially over areas that have had several inches of rain in the past one to two weeks.

Heavy precipitation across the South is expected to lead to flooding later this week. (Fox News)

"With soils near saturation and multi-day areal averages of 3 to 7 inches forecast, there will be an enhanced risk for widespread flooding concerns from eastern Texas to central West Virginia," the WPC said.

There is a particularly high risk for excessive rainfall in northern Mississippi and Alabama through Tuesday morning," according to the WPC.

The threat will then shift north to the southern Ohio Valley by Thursday morning.

"Many streams may flood and will potentially affect larger rivers, so please continue to monitor the latest forecast," the WPC said. "Do not drive through flooded areas."