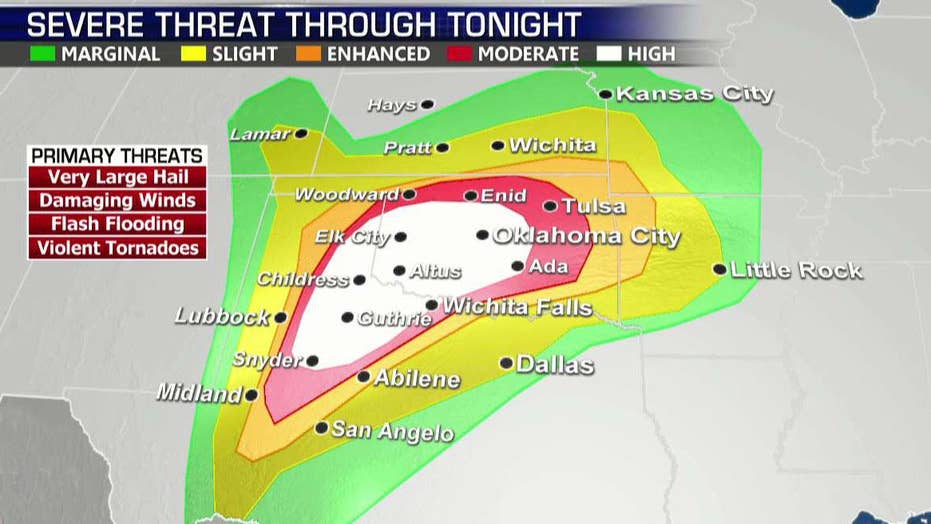 A dangerous and potentially "violent" day of weather is developing across the Southern Plains on Monday, as forecasters warn a tornado outbreak and severe thunderstorms could lead to life-threatening conditions -- prompting schools across the region to close.

The National Oceanic and Atmospheric Administration's Storm Prediction Center issued a "high risk" assessment for the area from northwest Texas into western and central Oklahoma, a huge swath of land with the greatest risk of "potentially long-track and violent" tornadoes developing during the day.

"They have issued a rare high-risk area today, and that means all of the conditions are favorable for tornadoes," Fox News Senior Meteorologist Janice Dean said on "FOX & friends." "Long-track, potentially damaging and deadly tornadoes."

Some of the tornadoes may reach EF-4 or EF-5 strength, with winds between 166 and 200 mph and could cause anywhere from "extreme" to "incredible" damage on what Dean warned could be a "potentially deadly day."

By midday on Monday, the SPC expanded the area of high risk to include Oklahoma City, and increased the tornado probabilities from 30 percent to 45 percent from northwest Texas into central Oklahoma.

"The last time a 45% tornado outlook was issued was during the Tornado Outbreak in Oklahoma and Kansas on 14 April 2012," the SPC said on Twitter.

Besides potentially spawning powerful tornadoes, the severe thunderstorms are expected to lead to large hail, damaging wind gusts and flash flooding. The punishing wind gusts could reach hurricane-force and the hail may be the size of baseballs, according to the NWS.

For residents in the Texas cities of Lubbock and Wichita Falls, a "moderate" risk remains through the day Monday. The NWS said more-isolated but still potentially dangerous severe weather, including tornadoes, is possible in surrounding parts of Texas, Oklahoma, Kansas and Arkansas.

Tornadoes on Monday could reach between EF-4 and EF-5 strength, according to Fox News Senior Meteorologist Janice Dean (Fox News)

"These dangerous storms will continue after sunset and into the overnight hours," Dean said.

The severe weather outbreak is happening on the sixth anniversary of the tornado that devastated Moore, Oklahoma. The 2013 EF-5 twister killed 24 people as it ravaged the Oklahoma City-suburb with brutal winds estimated at 210 mph.

Schools throughout the Oklahoma City area closed Monday due to the anticipated severe weather.

"We believe this is the best decision for our students, staff and families as their health and safety are priority," Moore Public Schools said in a statement posted to Twitter. "Please ensure safety plans are in place for your family in case needed for severe weather."

Moore school officials added that all safe rooms will be completed by the end of July 2019. The district currently has four safe rooms that are near completion and has 31 completed.

Oklahoma City Public Schools also wrote on Facebook they decided to cancel all classes and activities have been canceled for Monday due to the risk of severe weather.

A U.S. Air Force base in Oklahoma moved aircraft to other military installations and is recommending staff don't come to work in anticipation of storms expected to batter the state.

National forecast for Monday, May 20

A spokesman told the Associated Press that planes at Tinker Air Force Base were moved to other bases over the weekend.  The base outside Oklahoma City remains open, but nonessential staff were given leave to stay home Monday as the region braces for storms forecasters say could bring hail, flooding and wind gusts of up to 80 mph.

The NWS is telling residents in the affected areas to review severe weather safety procedures for the possibility and stay alert for watches and warnings throughout the day.

Steps you can take to prepare for severe weather in your area. (Fox News)

"A tornado watch means that conditions are favorable for tornadoes to form during the next several hours," the NWS said. "If a tornado warning is issued for your area, move to a place of safety, ideally in a basement or interior room on the lowest floor of a sturdy building."

After the threat on Monday, the risk for severe storms shifts toward the eastern Plains and Mississippi River Valley by Tuesday, according to Dean.

There have been numerous severe weather reports over weekend across the Southern Plains. (Fox News)

Summer-like temperatures across the Northeast may also spark some action.

"Fueled by above-average temperatures, a few thunderstorms across the Northeast and New England may also reach severe limits this afternoon and evening, with the primary threats there being damaging winds and hail," Dean said.