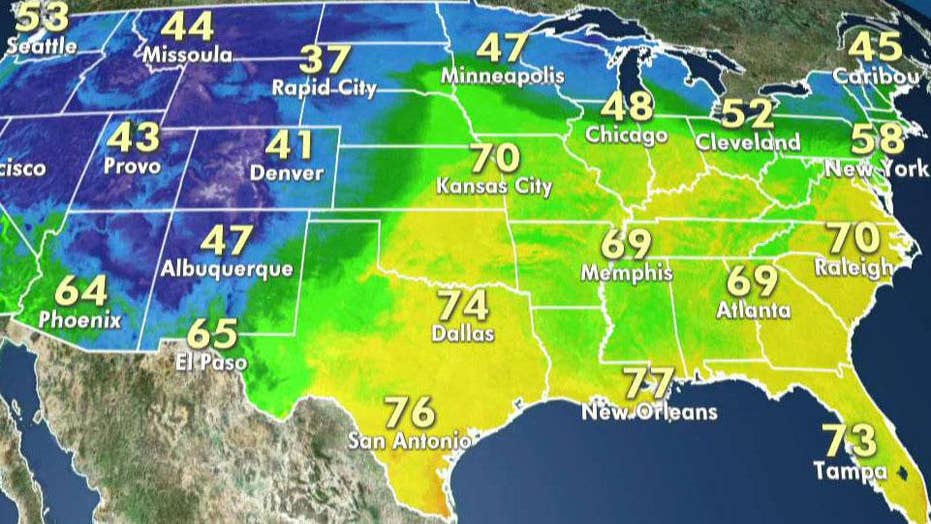 National forecast for Saturday, May 18

Adam Klotz has your Foxcast.

States throughout the Central U.S. and parts of the Midwest are bracing for extreme weather this weekend as they expect to see severe thunderstorms, flash flooding and tornadoes

The National Weather Service issued warnings Saturday for much of the Plains and Mississippi Valley. Damaging winds and flash flooding are expected to last throughout the weekend with some parts of the region experiencing large hail and tornadoes.

“An enhanced risk of severe w/ widespread damaging winds and a few strong tornadoes across the ArkLaTex and a moderate risk of excessive rain across IA,” the agency wrote on Twitter.

The extremely high temperatures are also expected to drop, with some areas 20 to 30 degrees below average, the NWS said.

Heavy showers and Thunderstorms will affect the central and southern Plains during the afternoon on Saturday and will move towards the lover Mississippi Valley Saturday night. Heavy rains will likely result in flash flooding for parts of southwest Iowa and southeast Nebraska, officials said.

A tornado watch was issued on Saturday for parts of Missouri, Kansas, Arkansas, Oklahoma and parts of Central Texas. The warning was in effect until 5:00 p.m. central time.

While Central parts of the U.S. experience wet conditions, mountains throughout the Northwest could accumulate up to a foot of snow into next week, The Weather Channel reported.