Two men were killed and another man was injured in a shooting at a church in Texas on Sunday -- the latest in a string of attacks at houses of worship in recent years.

Sunday's shooting unfolded around 9:57 a.m. at the West Freeway Church of Christ, which is located in the city of White Settlement, just outside of Fort Worth.

A spokeswoman for MedStar Mobile Healthcare, an ambulance service, told The Associated Press that two people had been shot and killed, one of them the gunman; a third person, in critical condition, suffered cardiac arrest but was revived.

An elder at the church told the New York Times that one of those killed was a security guard who responded to the shooter, calling him a dear friend. “He was trying to do what he needed to do to protect the rest of us,” Mike Tinius said. 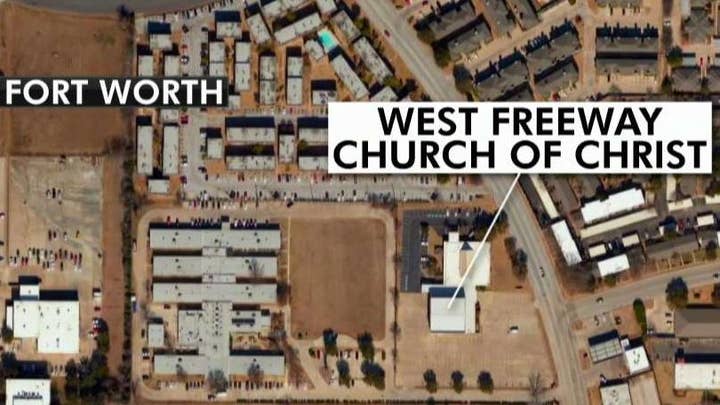 At least 13 deadly shootings have occurred in American houses of worship in recent years:

4. October 2015: Detroit, Michigan: A Detroit pastor shot and killed a man during Sunday services, when the man went after the pastor with a brick, according to police. The pastor whipped out his Glock handgun and fired several shots, killing the man, Detroit police said.

5. February 2016: Dayton, Ohio: A gunman opens fire at St. Peter's Missionary Baptist Church in Dayton, Ohio, killing the pastor. More than 20 people were reported to be inside the church at the time of the shooting,

6. April 2017: North Wales, Pennsylvania: Authorities say a dispute between two members at Keystone Fellowship Church in a Philadelphia suburb during a Sunday worship service ended with one person shooting and killing the other. Authorities didn't say what the disturbance was at the evangelical church.

7. May 2017: Kansas City, Missouri: A church greeter was shot while welcoming parishioners at a church in south Kansas City, police said. The suspect entered the House of Refuge Family Worship Church through a rear door and fired multiple shots, according to police. Greeter Montell Bruce was struck in the head, but his injury was not life-threatening, authorities said.

8. June 2017: Oakland, California: Police arrested a man who they allege fired eight bullets into a religious statue outside St. Felicitas Catholic Church in Oakland, California. They investigated the shooting as a hate crime. No one was injured, but police a police spokesman said that officers struggled with the male subject when he was taken into custody. The name of the person arrested was not immediately released. He was described as white male in his mid-30s.

9. September 2017: Nashville, Tennessee: One woman was killed and seven other people were hurt after a suspect identified as a Sudanese immigrant opened fire at a Tennessee church, police said; the FBI confirmed it launched a civil rights investigation into the shooting.

10. November 2017: Fresno, California: A man waiting at a church parking lot shot and killed his estranged wife and her boyfriend after they emerged from Mass at St. Alphonsus Church. The husband, Manuel Garcia, 64, then drove to the family home 11 blocks away and, as SWAT officers massed outside, took his own life.

11. November 2017: Sutherland Springs, Texas: 26 people were killed and 20 others wounded in a shooting at the First Baptist Church in Sutherland Springs. Devin Patrick Kelley fired at least 450 rounds inside the church, authorities have said. A nearby resident shot and wounded Kelley before the killer drove away and ultimately ended his own life, according to authorities.

12. October 2018: Pittsburgh, Pennsylvania: A man opened fire in the Tree of Life synagogue in an anti-Semitic attack, killing 11 people and injuring six others.

13. April 2019: Poway, California: One person was killed, and at least three were wounded by a shooter at the Chabad of Poway synagogue.

Fox News’ Stephen Scarola and The Associated Press contributed to this report.