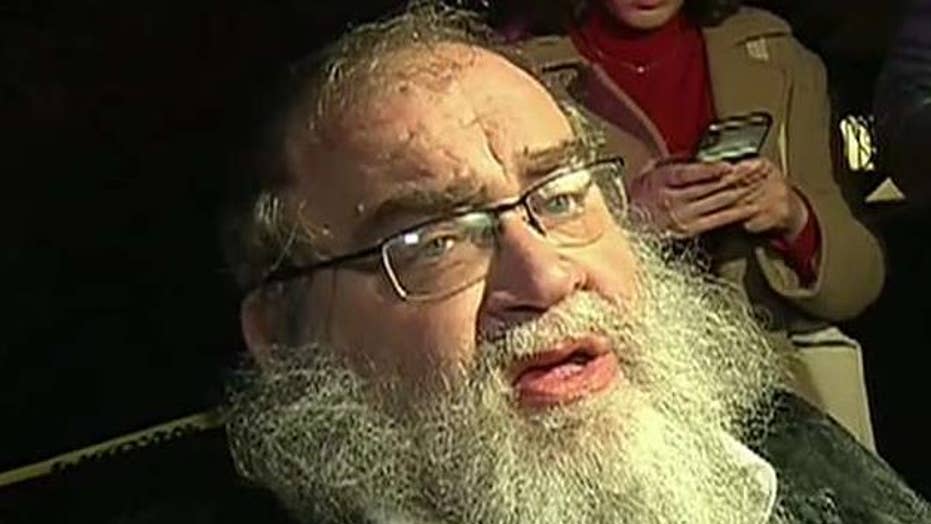 The assault happened in Monsey, New York by a machete-wielding suspect who drove away; Jacqui Heinrich reports.

The man accused of entering the home of a New York rabbi and stabbing five people with a machete, in a horrifying Saturday night attack labeled an anti-Semitic act of "domestic terrorism," pleaded not guilty to multiple charges Sunday.

Bail was set at $5 million.

Police said Thomas allegedly entered the home of Rabbi Chaim Rottenberg in Monsey, a suburb north of New York City, during a Hanukkah celebration -- the latest in a string of anti-Semitic incidents in recent weeks that included beatings of Jewish people in the streets of New York City and a massacre at a kosher grocery store in Jersey City, N.J.

Thomas sped away from the stabbing scene but later was captured in the Harlem neighborhood of New York City. He had blood all over his clothing and smelled of bleach, according to prosecutors.

One person was very seriously wounded and remained in critical condition, Gov. Andrew Cuomo told reporters. The rabbi's son was also injured; his status and that of the other victims were not clear.

Investigators have not provided a motive for the attack, but Cuomo said it was an example of larger problems.

"This is an intolerant time in our country," he said to reporters outside the rabbi's home on Sunday morning. "We see anger, we see hatred exploding."

The governor added: "It is an American cancer on the body politic." He continued, "This is violence spurred by hate, it is mass violence and I consider this an act of domestic terrorism."

Police said the stabbings unfolded at around 10 p.m. A witness saw the suspect driving off and alerted police to the license plate number, Brad Weidel, the police chief in Ramapo, which covers Monsey, said. That allowed police to find his vehicle as he entered New York City, where police apprehended.

"I was praying for my life," Aron Kohn, 65, who was inside the house at the time, told The New York Times. "He started attacking people right away as soon as he came in the door. We didn't have time to react at all."

Among the groups condemning the attack was the Republican Jewish Coalition.

"The political leadership in New York isn't doing nearly enough to protect its Jewish citizens," the group wrote on Twitter. "This has become a daily occurrence in NY. These attacks might not be a convenient talking point for those on the left, but they still need to speak out."

Monsey – a town of about 18,000 residents some 35 miles north of New York City – had seen a previous attack just last month, when a 30-year-old man on his way to morning prayers was beaten and stabbed, The Journal News of Rockland County reported.

In New York City, the NYPD's Counterterrorism Bureau said it was “closely monitoring" Saturday's attack in Monsey, and the Anti-Defamation League of New York and New Jersey said it was aware of the attack and was sending representatives to the town.

An Orthodox Jewish man stands in front of a residence in Monsey, N.Y., Sunday, Dec. 29, 2019, following a stabbing late Saturday during a Hanukkah celebration. A man attacked the celebration at the rabbi's home north of New York City late Saturday, stabbing and wounding several people before fleeing in a vehicle, police said. (Associated Press)

Messages posted later by the Orthodox Jewish Public Affairs Council of the Hudson Valley said that five people had been stabbed, including one victim who was struck six times, and that two of the victims were in critical condition. That message added that the suspect had been seen leaving in a gray Nissan Sentra vehicle.

Letitia James, the state attorney general of New York, condemned the attack in a message posted on Twitter.

"I am deeply disturbed by the situation unfolding in Monsey, New York tonight," James wrote. "There is zero tolerance for acts of hate of any kind and we will continue to monitor this horrific situation.

"Horrific," de Blasio wrote. "So many Jewish families in our city have close ties to Monsey. We cannot overstate the fear people are feeling right now.

Orthodox Jewish residents talking with police on Forshay Road in Monsey, N.Y., Sunday, Dec. 29, 2019, down the street from the scene of the stabbing. (Associated Press)

"I've spoken to longtime friends who, for the first time in their lives, are fearful to show outward signs of their Jewish faith," he added.

"I've spoken to longtime friends who, for the first time in their lives, are fearful to show outward signs of their Jewish faith."

Also earlier Saturday, U.S. Rep. Lee Zeldin, R-N.Y., wrote on Twitter that "feckless leadership" in New York City was partly to blame for the wave of anti-Semitism there.

"The violent anti-Semitic attacks in NYC are being caused by raw hate, feckless leadership, a culture of acceptance, education & promotion of anti-Semitism, & lowering quality of life," Zeldin, from the city's Long Island suburbs, wrote.

"De Blasio & ALL elected and community leaders need to step up to confront & crush this threat."