The suspected gunman behind Saturday’s shooting in a Pittsburgh synagogue, which left 11 people dead and six more injured, has been formally charged, prosecutors said.

Robert Bowers, 46, was charged late Saturday with 29 federal counts of crimes of violence and firearms offenses after authorities say he carried out an anti-Semitic attack on Shabbat, the Jewish Sabbath. The bloody attack brought swift condemnation from President Trump and other leaders, and inspired a grim vigil in the city on Saturday night that attracted thousands.

The suspect also faces a list of local charges, the Pittsburgh Post-Gazette reported.

He confirmed the 11 deaths -- none of them children. As for the injury tally, he said it did not include the shooter, who was taken to the hospital after being taken into custody.

University of Pittsburgh Medical Center officials said a 61-year-old woman was among the injured. Her injuries were described as “extremity soft tissue injuries that required cleaning in the operating room.” She is said to be in good condition and recovering.

Another victim was ID'd as a 70-year-old male with gunshot wounds to his torso “involving major organs in his abdomen.” He was undergoing his second operation and in critical condition, hospital officials said.

Police Chief Scott Schubert said that two police officers were hit during initial contact with the shooter and that two SWAT team members were also struck “during an engagement inside the building.” He confirmed that all four law enforcement officials are in stable condition.

Officials said there were multiple fatalities and six people injured in the shooting on Saturday, Oct. 27, 2018. (AP)

The FBI special agent in charge of the Pittsburgh office, Bob Jones, said that it was the most “horrific crime scene” he’s witnessed in his 22-year career with the bureau. Jones said that the victims were targeted “simply because of their faith,” but that Bowers’ full motive was as yet unknown.

Bowers is said to have shouted that "all Jews must die" as he sprayed bullets, according to KDKA-TV. The attack took place during a baby naming ceremony on Shabbat, what is traditionally the busiest of days for synagogues.

Pennsylvania Gov. Tom Wolf said that the FBI is investigating the shooting as “a hate crime.” That was reinforced on Saturday evening by Attorney General Jeff Sessions, who said the Justice Department intends to file hate-crime and other charges over an act he deemed "reprehensible and repugnant to the values of this nation."

“At this point we have no knowledge that Bowers was known to law enforcement before today,” Jones added. 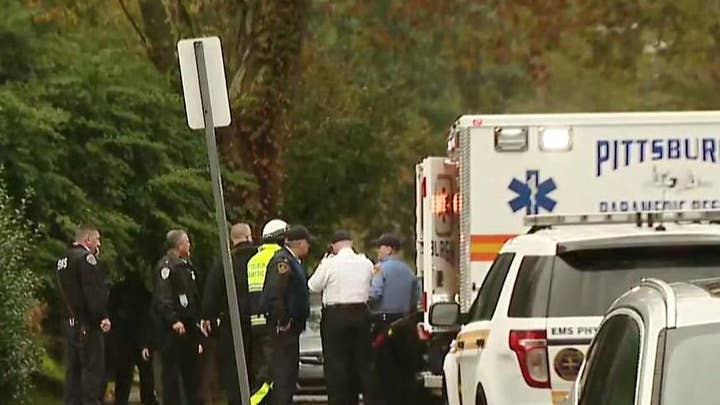 Hours after the deadly shooting, thousands gathered at an intersection in the light rain to grieve for those killed and wounded.

"We'll be dealing with this for months and years," said State Rep. Dan Frankel, who represents the synagogue's district and was speaking a block away when the gunfire began. "It leaves an indelible mark."

In the afternoon appearance in Indianapolis, President Trump, who said he'd been in contact with the mayor and governor over the tragedy, called the shooting a wicked, anti-Semitic act of "pure evil."

First responders were seen near the Tree of Life Synagogue in Pittsburgh, Pa., where a shooter opened fire Saturday, Oct. 27, 2018. (AP)

First lady Melania Trump, like her husband, tweeted about the shooting Saturday.

“My heart breaks over the news out of Pittsburgh. The violence needs to stop. May God bless, guide & unite the United States of America,” she wrote.

Meanwhile, police in New York and Los Angeles said they would be deploying extra teams to synagogues and Jewish locations throughout those cities.

During Saturday night's memorial, there was no shortage of prayers and singing. There was also anger, and a "vote, vote, vote" chant broke out during an emotional gathering at which some derided the nation's political climate.

Several attendees blamed the shooting on the nation's deepening political and social rifts, and said they took little solace in a planned visit by Trump.

Governor Wolf attended the vigil, suspending a campaign bus trip after learning of the attack.