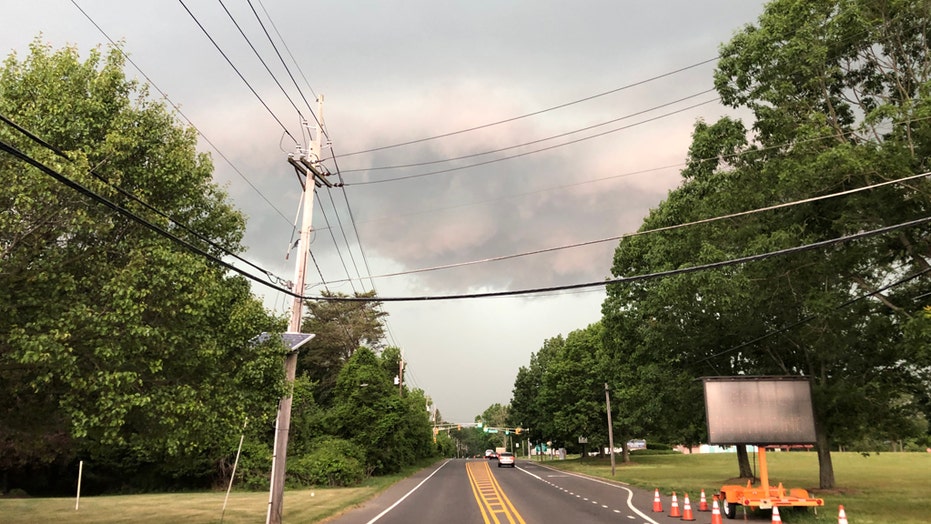 Over 500,000 customers were without power in Pennsylvania and New Jersey after a powerful line of severe thunderstorms roared through the region Wednesday, bringing down trees and flipping a semi-truck.

The National Weather Service (NWS) office in Mount Holly, N.J., warned that a line of severe thunderstorms was producing  wind gusts of over 80 mph as they neared the Philadelphia metro area.

"This is an EXTREMELY DANGEROUS SITUATION," the NWS tweeted. "These storms are producing widespread wind damage across eastern PA. SEEK SHELTER NOW inside a sturdy structure and stay away from windows!"

The storms moved through the Philadelphia and Trenton, N.J., areas shortly after noon, bringing fierce winds and blinding rain as they bore east.

A satellite view showed flashes of lightning from the storms.

The NWS Eastern Region said on Twitter that the squall line brought hurricane-force wind gusts of 89 mph in Beach Haven on New Jersey's Long Beach Island and 87 mph in Brick.

Preliminary reports of wind gusts of between 60 and 80 mph were reported across eastern Pennsylvania. Video from FOX29 showed blinding rain quickly overtaking the city.

In Philadelphia, a tractor-trailer overturned northbound on the Girard Point Bridge after strong winds blasted the area.

Downed trees also were reported across Philadelphia after the storms moved through.

The region was under various severe thunderstorm warnings until 3 p.m. ET, according to FOX29.

The power-outage tracking website poweroutage.us said there were at least 365,568 outages in Pennslyvania, mostly concentrated in the southeast corner of the state. In neighboring New Jersey, 189,072 outages were reported as of Wednesday afternoon.

Forecasters warned that tens of millions of people were under the threat of severe weather on Wednesday. The SPC highlighted a corridor where violent weather is possible from the central Plains through the Midwest, to the East Coast

An enhanced risk of severe weather on Wednesday extends from Pennsylvania into New Jersey and the New York City metro area. (Fox News)

The SPC said that more than 83 million are at risk of seeing severe weather, with an enhanced risk for parts of Pennsylvania into New Jersey and the New York City metro area.