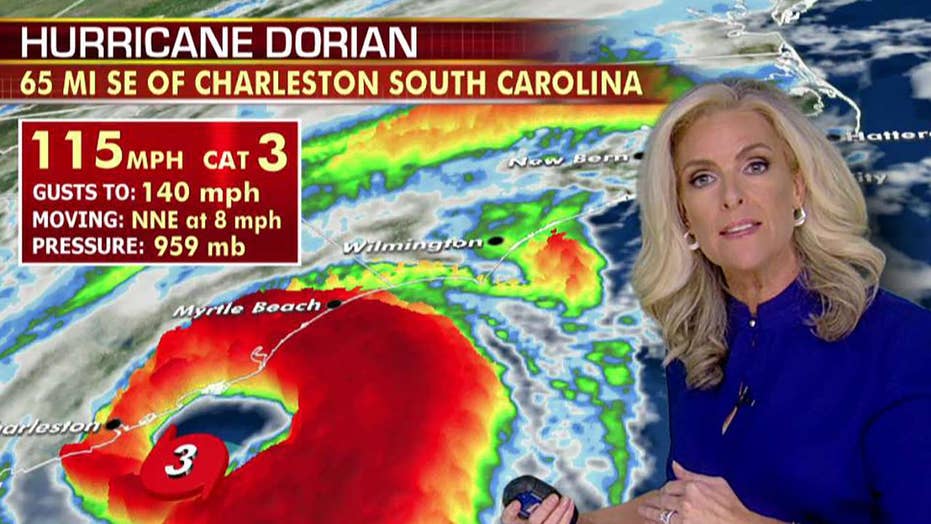 Hurricane Dorian forecast: Tornado warnings in the Carolinas as the powerful storm churns up the coast

A reinvigorated Hurricane Dorian roared toward the Carolinas on Thursday, bringing tropical storm conditions along the South Carolina coast and flooding in Charleston, along with the threat of tornadoes across the region, including northward into North Carolina.

The National Hurricane Center said as of 2 p.m. that Dorian is a Category 2 storm with maximum sustained winds at 110 mph. Dorian was located about 60 miles south of Myrtle Beach, S.C. and 115 miles south-southwest of Wilmington, N.C., moving north-northeast at 8 mph.

As of early Thursday, the South Carolina Emergency Management Division said utilities were reporting more than 200,000 power outages statewide. Duke Energy, in a news release Wednesday, said it expected the storm to cause 700,000 outages in the Carolinas and that it brought in resources from 23 states and Canada to respond "as soon as it was safe to do so."

"The results of this storm actually have not changed, just the category, which at this point whether it's 2 or 3 doesn't matter, we're still going to get the same results," Fox News Senior Meteorologist Janice Dean said on "Fox & Friends."

Dean said the coastal areas of the Carolinas were always within the forecast cone of the storm when it was still a Category 3 before initially weakening slightly.

"In that situation, you need to know what your surroundings are like if you are dealing with 105 mph winds or 115 mph winds. I mean, that's still a formidable storm," Dean said.

Hurricane warnings were in effect for the Carolina coasts up to Virginia, with a "potentially life-threatening storm surge" of up to 8 feet around the North Carolina-South Carolina line. Coupled with high tide, the storm's arrival Thursday is expected to push water up the mouths of coastal rivers, causing low-lying areas to flood. Dorian is also forecast to bring 6 to 12 inches of rain for the coastal Carolinas, with isolated cases of up to 15 inches.

Flash flood warnings were posted in the Charleston, S.C., area, with heavy rain bringing flooding into central parts of the city.

"Trees hanging in power lines and debris covering the roads in many places across Beaufort County, these things are dangerous and Dorian isn’t finished yet! Stay In and have a chill out morning, give the clean up crews time to work after the storm!!" he said.

Dorian is also creating "widespread" impacts as it neared the Carolinas, according to Dean, including the threat of tornadoes.

"The threat for not only storm surge, heavy rainfall, lightning, but we have tornado-warned storms as well," Dean said on "Fox & Friends. "All of these effects we were anticipating, whether it was a Category 2 or a Category 3."

ALLIGATOR SPOTTED OUT IN HURRICANE: 'GATOR AND #DORIAN MOVING AT SAME SPEED'

The beach town of Emerald Isle in North Carolina, reported damage from a tornado that was spun off as Hurricane Dorian approached the area.

Mobile homes are upended and debris is strewn about at the Holiday Trav-l Park, Thursday, Sept. 5, 2019, in Emerald Isle, N.C, after a possible tornado generated by Hurricane Dorian struck the area. (Julia Wall/The News & Observer via AP)

Emerald Isle, North Carolina, said in a news release on its website that the waterspout touched down around 9 a.m. Thursday.

More than a dozen campers were knocked on their side, their metal skin mangled and twisted. Some were flipped upside-down, with their tires now aimed toward the sky as power lines were downed across a parking lot, where trash was strewn everywhere.

"Damage is being assessed after a tornado touched down in Emerald Isle. During hurricanes, tornadoes can form quickly with little warning," North Carolina Emergency Management said on Twitter. "The threat of tornadoes will persist across portions of central & eastern NC through Fri. as Dorian’s bands expand north."

In North Myrtle Beach, a small tornado touched down early Thursday, too, causing minor damage with no injuries reported, according to News13. Video posted to Twitter appears to show the twister.

Another tornado was captured on camera further north around 7 a.m. in Pender County outside a fire station, according to the National Weather Service's Wilmington Office.

In North Carolina, Gov. Roy Cooper warned residents to adhere to evacuation orders and finish last-minute storm preparation, as extensive damage is expected at the coast regardless of whether Dorian makes landfall.

National Hurricane Center Director Ken Graham has the latest maps and scenarios for the Carolinas on 'America's Newsroom.'

The state’s medical examiner’s office announced the first storm-related fatality in North Carolina. An 85-year-old man in Columbus County died Monday after falling off a ladder while preparing his house for the arrival of Hurricane Dorian.

“We really are very sorry about that and thinking about his family. It reminds us that preparations for storms can really be a dangerous activity,” Cooper said, according to Raleigh's The News & Observer. He warned residents to take caution when boarding up windows and carrying out other measures to prepare for the storm.

Cooper said at a Thursday morning at a news conference that the approaching storm "is serious and can be deadly." He urged people to "get to safety and stay there."

The governor already ordered a mandatory evacuation of the state's fragile barrier islands, although people can't be forced to leave their homes. More than 1,000 people already are in over 50 shelters. Cooper added the storm spawned an apparent tornado early Thursday in Brunswick County that caused some damage.