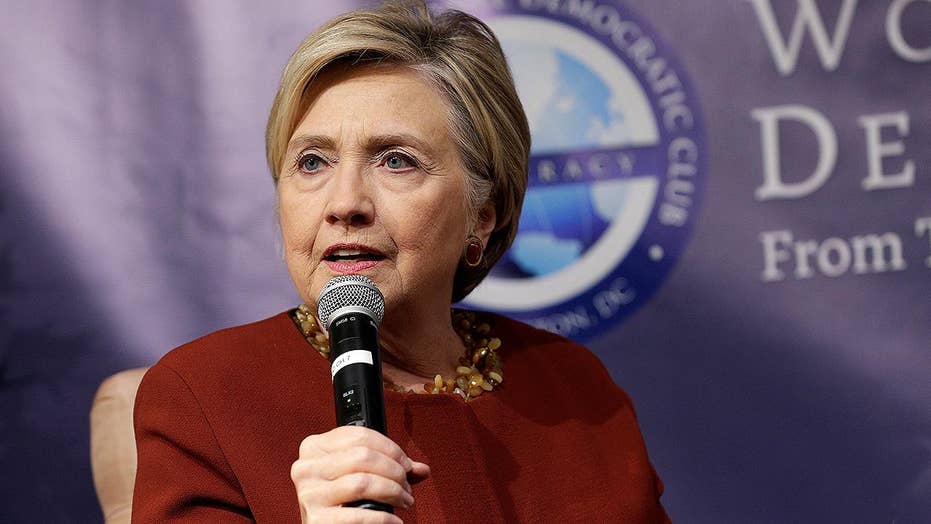 Group of Republican lawmakers are calling for the appointment of a second special counsel to look into alleged misconduct at the Justice Department and the FBI; chief intelligence correspondent Catherine Herridge reports from Washington.

THE LEAD STORY - HOUSE REPUBLICANS SEEK SECOND SPECIAL COUNSEL: A group of congressional Republicans plans to introduce a resolution Tuesday calling for the appointment of a second special counsel to investigate alleged misconduct at the FBI and Justice Department ... The resolution is backed by Rep. Mark Meadows, R-N.C., the chairman of the conservative House Freedom Caucus as well as two of the group's co-founders -- Rep. Jim Jordan, R-Ohio, and Rep. Ron DeSantis, R-Fla. Fox News has learned the 12-page resolution will ask a second special counsel to probe matters related to three topics: The ending of the investigation into Hillary Clinton's personal email server, the progress of the Trump-Russia investigation from its origins through the appointment of Robert Mueller as special counsel, and abuses of the Foreign Intelligence Surveillance Act (FISA) during the warrant application process.

TURNING UP THE HEAT ON RUSSIA PROBE: the White House announced that top FBI and Justice Department officials have agreed to meet with congressional leaders and review highly classified information in the Russia investigation the lawmakers have been seeking on the handling of the probe ... The agreement came after President Trump demanded that the Justice Department investigate whether the FBI infiltrated his presidential campaign. It's unclear exactly what the members will be allowed to review or if the Justice Department will be providing any documents to Congress. White House press secretary Sarah Huckabee Sanders said Trump chief of staff John Kelly will broker the meeting between congressional leaders and the FBI, Justice Department and office of the Director of National Intelligence. She said the officials will "review highly classified and other information they have requested," but did not provide additional detail.

DOSSIER DEALINGS: The chairman of the Senate Judiciary Committee asked the Justice Department Monday to turn over communications between former Associate Deputy Attorney General Bruce Ohr, British spy Christopher Steele and others about the infamous anti-Trump dossier ... In a letter to Deputy Attorney General Rod Rosenstein, Sen. Chuck Grassley, R-Iowa, requested Ohr's emails, phone logs, written notes and text messages. Grassley also asked the Justice Department to arrange for Ohr to be interviewed by Committee staff. Grassley wrote that he wants to know whether Ohr continued to pass information from Steele to others at the FBI after the bureau terminated the former MI6 man as a source for disclosing his relationship with the FBI to the media.

TRUMP'S PRE-SUMMIT HUDDLE: President Trump will meet with South Korean President Moon Jae-in as part of his preparation for his scheduled June 12 summit with North Korean dictator Kim Jong Un ... Moon's government delivered the initial invitation from Kim for a meeting, and South Korea has been pushing the U.S. toward a peaceful resolution to the nuclear crisis. North Korea threw a potential wrench in the plans last week, threatening to cancel over concerns about the U.S. push to see the complete denuclearization of the Korean Peninsula.

PRIMARY TUESDAY: Four states will cast ballots Tuesday as the 2018 midterm elections take shape ... Voters in Arkansas, Georgia and Kentucky hold primaries, while Texans settle several primary runoffs after their first round of voting in March.

BALTIMORE MANHUNT: A Baltimore County, Maryland police officer died Monday after responding to a possible burglary, and officials say four suspects — believed to be "armed and dangerous" — remain at large ... Baltimore County Police Chief Terrence Sheridan said at a news conference Monday evening that around 2 p.m., a citizen dialed 911 to report a possible burglary with four suspects. The deceased officer, who has not yet been identified, responded to the scene in Perry Hall, where she was fatally injured. The four-year veteran of the force, whose life was "unfortunately cut short," was transported to a nearby hospital and pronounced dead at 2:50 p.m. Witnesses in the neighborhood reported hearing a pop sound and seeing the officer run over by a Jeep.

AS SEEN ON FOX NEWS

THE DESTRUCTION OF THE FBI AND DOJ: "It's going to take a decade to rebuild the public trust in the FBI and DOJ [and] Sally Yates... is going to have to lawyer up."  – Former U.S. Attorney Joe diGenova, on "Hannity," claiming that former acting attorney general Sally Yates is one of several Obama-era officials who used the FBI to surveil a rival party's presidential campaign. WATCH

THE OBAMA QUESTION: "Where the heck was Barack Obama? What did President Obama know about this?"  –  Judge Andrew Napolitano, on "America's Newsroom," asking what did the former president know about the alleged surveillance of the Trump campaign. WATCH

In messaging shift, Democrats are now the ones promising to 'drain the swamp.'

Cal Thomas: Who's afraid of cutting a mere $15 billion from the federal budget? Republicans, apparently.

What Planned Parenthood could learn from me: Being a teenage mom was hard, but it sure didn’t ruin my life.

Kendrick Lamar calls out white fan after she raps N-word.

Asteroid orbiting backward around Jupiter is first 'interstellar immigrant' from beyond our solar system.

Fox & Friends, 6 a.m. ET: Deputy Assistant Secretary of State Andrew Peek on the latest on North Korea and Iran; a look at what to expect from new CIA Director Gina Haspel as she takes over the agency; retired U.S. Marine and double-amputee Johnny "Joey" Jones is firing back at Six Flags after being kicked off a ride because of his prosthetic legs; meet the Florida sheriff who's planning to put an armed officer on every Polk County public school campus this week; and how small-town values helped Cal Turner build Dollar General into a billion-dollar company.

2013:  Lois Lerner, an Internal Revenue Service supervisor whose agents had targeted conservative groups, swears to a House committee she did nothing wrong, then refuses to answer further questions, citing her Fifth Amendment right not to incriminate herself.

1998: A federal judge rules that Secret Service agents could be compelled to testify before the grand jury in the Monica Lewinsky investigation.

1960: An earthquake of magnitude 9.5, the strongest ever measured, strikes southern Chile, claiming some 1,655 lives.