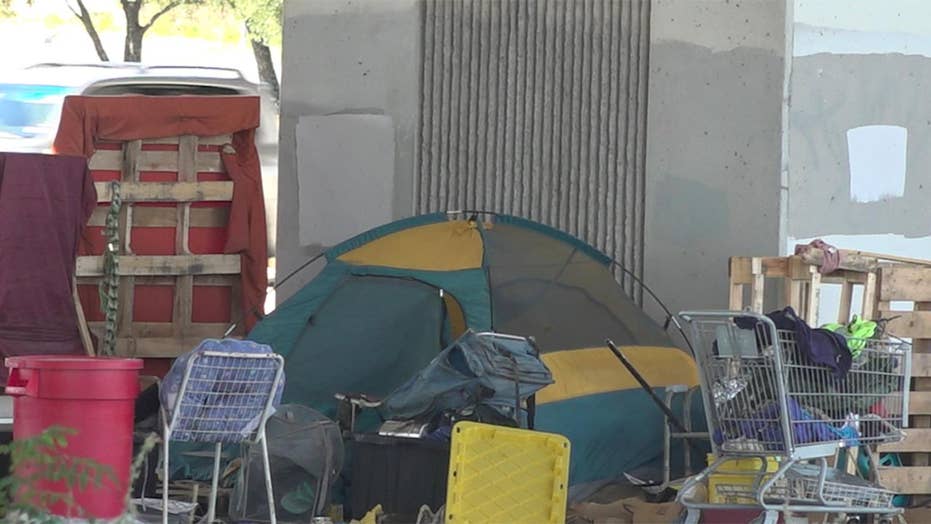 Governor Greg Abbott and Mayor Steve Adler have sparred over how to deal with the city’s homelessness issue. Now, the state is stepping in.

AUSTIN, Texas -- As state officials begin cleaning up homeless camps, they are still trying to figure out how to deal with the growing crisis.

Joseph Nichols organized his belongings on Monday morning underneath State Highway 71. Others scrambled to take down their tents and pack up their things ahead of the scheduled cleanup.

“They’re basically, OK, you want it that way? Then, that’s the way it’ll be. We’ll go to the woods,” said Nichols.

People living in camps under SH 71 spent Monday morning gathering their things ahead of a scheduled cleanup by Texas Department of Transportation.  (Fox News)

Nichols moved back to Austin in February after making stops in Arizona and Kentucky. He first moved to the city in 2011 but struggled to get a job. Faced with a slew of health issues and a lack of money, he found himself on the streets.

“I did OK at times, but I never really got to that point where I had enough funds to get through a month’s living. If I had a month’s living, I would’ve had a couple of paychecks, and I wouldn’t be at this situation,” said Nichols.

As Austin tries to grapple with how to deal with the city's homelessness crisis, it began cleaning up a growing number of camps amid health and safety concerns.

In July, the city council passed an ordinance allowing homeless people to camp on public streets as long as they do not pose a threat to themselves and others. The action sparked an immediate backlash.

“I live down the street here. And, everyone asks me what the hell happened here. It’s pretty disgusting. I don’t think it’s safe for the people that live there,” said resident Jeff Crawford.

“They’re basically a nuisance. They come in here and try to hang out and not buy anything,” added John Wood, who works at a convenience store not far from several homeless sites.

For months, Texas Gov. Greg Abbott sparred with city leadership over the move. Citing concerns of violence, used needles, and feces littering the streets, he penned a letter to Mayor Steve Adler last month, demanding them to take action by November or the state would step in.

Meanwhile, Adler has fought back against those reports, saying the city is not seeing an increase in syringes or feces. The mayor’s office added the city does routine cleanings and welcomes outside efforts.  Adler said the city is focused on housing, not hiding.

Cities throughout the country have struggled with the issue of homelessness. Los Angeles, Seattle, and San Francisco have seen spikes in homelessness in the midst of rising housing costs and lack of affordable housing.

It’s unclear how often TxDOT will be conducting the cleanups. The agency did not return e-mails or phone calls for comment. In the meantime, on fliers posted underneath the overpasses, TxDOT listed several shelters where the homeless can seek help.

However, Adler said the shelters “have been and are already full.”

Nichols said what they’re looking for is a real solution, not a Band-Aid.