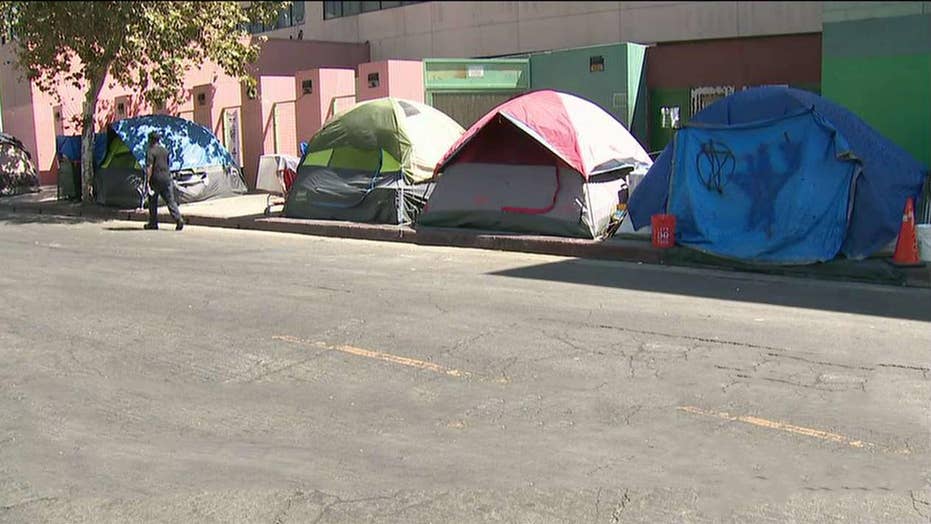 On the ground with HUD Secretary Ben Carson amid California's homeless crisis.

It's becoming deadlier to be homeless on the streets of the second largest city in the country, according to a newly released report by California officials.

The Los Angeles County Department of Public Health said in a report released Tuesday that between 2013 and 2018 the number of homeless deaths doubled from 536 to 1,047. The overall death rate, which takes into account increases in the total homeless population in the area, was up by over a third in that same period.

Drug and alcohol overdose was the largest contributor to the overall increase in the homeless death rate, accounting for 27 percent of the deaths between 2016 and 2018. The overdose death rate for homeless individuals was 26 times higher than among the general population.

Other causes of death were injury and violence at 24 percent, coronary heart disease at 22 percent, and transportation-related injuries at 9 percent. Six percent of homeless deaths, about 222 people, were attributed to homicide, while 185 deaths were from suicide, about 5 percent of deaths in the time period.

The Los Angeles County Department of Public Health found the death rate among homeless people jumped by a third from 2013 to 2018. (AP Photo/Richard Vogel, File)

The day the report and its "sobering mortality statistics" were released, L.A. County supervisors voted Tuesday to deploy health care workers to encampments and shelters to address the needs of the county's homeless population.

"This report is tragic, and reflects a true state of emergency on the streets of our community," said Supervisor Mark Ridley-Thomas, one of the co-authors of the motion. "It is unconscionable and inhumane for society to continue to turn a blind eye to this plight."

Supporters say the proposal would free up state and federal funding typically reserved for natural disasters; insight from Mike Shellenberger, founder and president of Environmental Progress.

"This alarming increase in homeless deaths requires immediate action to improve the care for our most vulnerable populations," Director of Public Health Barbara Ferrer said in a statement. "As we work hard to secure housing for those experiencing homelessness, we have a civic and moral obligation to prevent unnecessary suffering and death."

California Gov. Gavin Newsom signed off on a $214.8 billion budget in June, authorizing $2.4 billion in spending to address the state's housing and homelessness crisis. The budget allocates $650 million to local governments to build shelters, offer rental assistance and convert hotels and motels to temporary or permanent housing.

A homeless man moves his belongings from a street behind Los Angeles City Hall as crews prepared to clean the area on July 1, 2019. (AP Photo/Richard Vogel,File)

In Los Angeles, Mayor Eric Garcetti has prioritized Skid Row in his plan to tackle homelessness and is allocating $7 million from the $124 million the state approved for improving the health and safety of city residents. The city already spent $20 million last year to expand hygiene infrastructure and street cleanups in the community.

In the report released by health officials on Tuesday, officials also recommended putting together traffic strategies for reducing traffic fatalities, including implementing traffic calming and other safety measures near homeless encampments.

"Homelessness can have a devastating impact on a person's health and well-being, and we need to better understand the underlying causes that contribute to our County’s high mortality rate among those who are experiencing homelessness," County Supervisor Hilda L. Solis said, in part. "We must recommit ourselves every day to identify innovative solutions that can help prevent premature deaths among our most vulnerable residents."