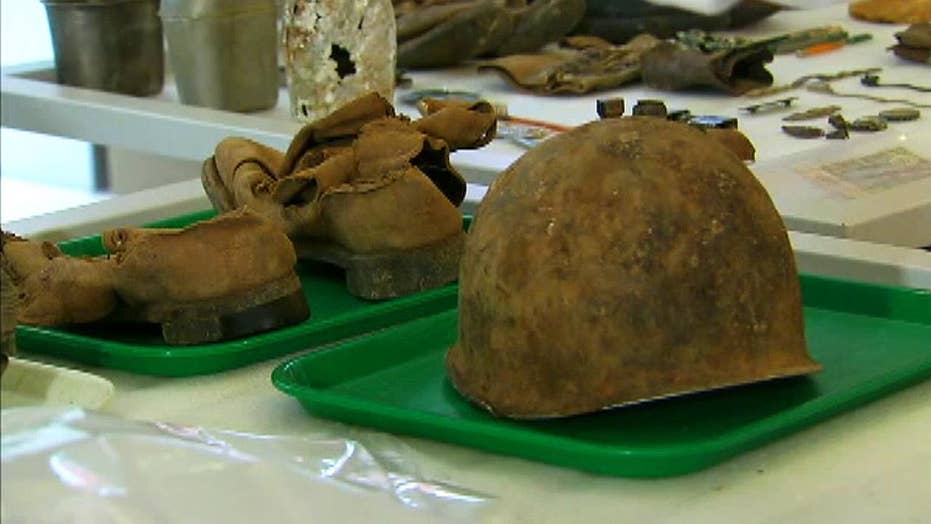 Dozens of American soldiers have been identified so far from the 55 boxes of remains and artifacts sent back home from North Korea last year after a historic meeting between Hermit Kingdom leader Kim Jong Un and President Trump, Defense Department officials announced Friday.

The boxes were handed over as part of an agreement between Trump and Kim following the June 2018 summit. Inside, Pentagon officials said they've found several pairs of boots, two helmets, several canteen bottles, dozens of buttons, buckles, a bayonet handle and a dog tag, amongst other items.

“We are up to 41,” Air Force Lt. Col. Kenneth Hoffman told Stars and Stripes Friday when asked how many sets of the remains have been identified.

A U.S. airman stands guard next to caskets containing remains of U.S. soldiers killed in the Korean War and collected in North Korea before a repatriation ceremony at Osan Air Base in Pyeongtaek, South Korea, in August 2018. (AP)

One soldier whose identity was revealed this week is Army Cpl. Lloyd B. Odom, of Odessa, Mo. The 19-year-old was reported missing in action on Dec. 2, 1950, during the Korean War’s Battle of the Chosin Reservoir, according to Stars and Stripes.

He is now set to be buried at Arlington National Cemetery at an undetermined date.

Army Master Sgt. Charles H. McDaniel – another soldier whose remains were returned – was identified after officials found his dog tag in the boxes.

Military members stand at attention after placing transfer cases in a hanger at a ceremony marking the arrival of the remains believed to be of American service members who fell in the Korean War at Joint Base Pearl Harbor-Hickam in Hawaii, in August 2018. (AP)

“We can’t speculate at this point about how many more soldiers may be identified,” Hoffman said.

More than 7,800 Americans remain unaccounted for from the war and the remains of more than 5,000 Americans are believed to be located in North Korea, according to officials.