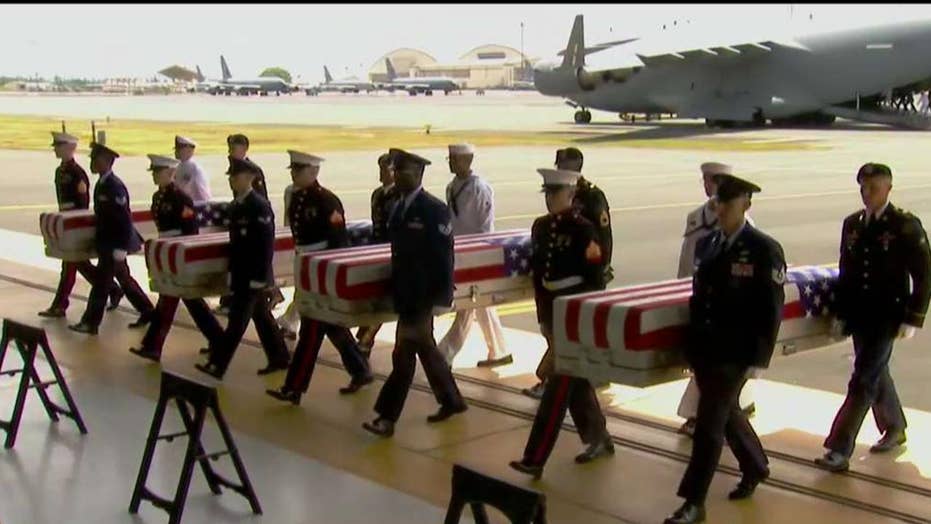 Whatever Happened to the transfer of remains of American war heroes returned from North Korea?

It's been more than six months since North Korea turned over 55 boxes containing the remains of some of America's heroes from the Korean War, but hasn't turned over any more since the dignified transfer in Hawaii.

The Pentagon has suspended talks with North Korea about recovering more remains of missing American soldiers from the Korean War — one of the key pledges to come out of the first summit between President Trump and North Korean leader Kim Jong Un in Singapore last June.

More than 7,800 Americans remain unaccounted from the war and the remains of more than 5,000 Americans are believed to be located in North Korea, according to officials.

Chuck Prichard, a spokesman for the Defense POW/MIA Accounting Agency, confirmed the suspension in an emailed statement to Fox News.

“[North Korean] officials have not communicated with DPAA since the Hanoi Summit,” Prichard said. “ As a result, our efforts to communicate with the Korean People's Army regarding the possible resumption of joint recovery operations for 2019 has been suspended. We have reached the point where we can no longer effectively plan, coordinate, and conduct field operations in [North Korea] during this fiscal year, which ends on September 30, 2019.”

Prichard said they “are assessing possible next steps in resuming communications with the KPA to plan for potential joint recovery operations to be scheduled during Fiscal Year 2020. “

Reuters was first to report the suspension.

Fox News first reported in February the freeze in discussions with North Korea as Pentagon officials accused the regime of dragging their feet after only one delivery of remains more than six months ago.

Last summer, in line with the Trump-Kim summit in June, the North turned over 55 boxes of what it said were the remains of an undetermined number of U.S service members killed in the North during the 1950-53 war. Thus far, three American service members have been identified from those remains.

Since then, the Trump administration has made no discernable progress toward a deal on eliminating the North's nuclear weapons. Although the remains recovery effort is technically separate from the nuclear talks, it appears to have become entangled in the broader disagreement between Washington and Pyongyang over nuclear weapons and other efforts to improve relations.

“We would be delighted if we could get more remains turned over to us," Dr. John Byrd said in an interview with Fox News earlier this year.

The Trump administration has previously touted the recovery of remains as an accomplishment of the summit.

“We’re not seeing missiles being tested and flying over other countries. The remains are coming home,” White House Press Secretary Sarah Sanders said in February on “Fox & Friends.”