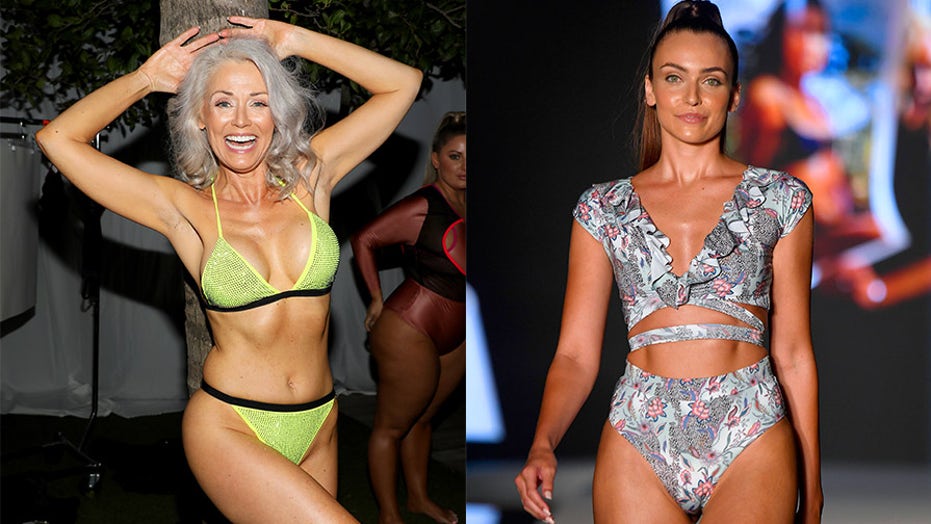 The popular outlet has unveiled the names of the 17 finalists from its ongoing model search — and among them are a U.S. army veteran, Courtney Smits, and Kathy Jacobs, a 55-year-old bombshell.

Some of the other models competing in this year’s #SISwimSearch this year are plus-size model Ashley Alexiss, described as “the new Ashley Graham” by the press, former Miss Colombia Ariadna Gutierrez, and Christie Valdiserri, a fitness instructor and dancer who has documented her journey with alopecia, just to name a few.

The women participated in the #SISwimSearch fashion show in Miami at W South Beach as part of the competition.

“I am a fifth-generation service member, to include my mother, father, stepmother and brother,” Smits, 23, told the magazine. “I have served almost six years as a Psychological Operations Specialist in the Army Reserve. I enlisted when I was 17 and left for Basic Training a few weeks after graduating high school.”

“Growing up, I never really had any intention of joining the military until I got to high school and really realized the amazing impact that it had on my family,” Smits continued. “Serving in the Reserves has allowed me to be a full-time student while training with my unit at the same time.”

As for Jacobs, she is no stranger to the runway. The former Ford model wants to inspire women and let them know that age is just a number. She recently appeared in a Thirdlove campaign with her daughter Abigail, as well as in a video for Miley Cyrus, among others.

“I really wanted to bridge the age gap with my submission this year and I couldn’t think of a better way to show than a mother/daughter video showcasing how we are all amazing, at every age,” Jacobs explained to SI. “I wanted to show younger girls not to fear aging, while showing women my age they can still rock it in a bikini!”

"I am doing this to be part of a change in the views on women over 50, not only by society but ourselves,” Jacobs pointed out. “It is a boomerang effect, and we as women over 50 need to stand together and realize how amazing, relevant, beautiful and sexy we all are. It’s time women of all ages unite and claim their power! Ageism impacts all of us, and women of all ages coming together and stopping it now helps prevent future generations from ever experiencing it!”

UK’s Daily Mail reported the women were chosen after the magazine’s annual Miami Swim Week runway show in June of this year. According to the outlet, it was considered the publication’s most diverse runway show ever.

Jacobs admitted she was nervous when it came time for her close-up as part of the ongoing competition. However, those nerves quickly disappeared.

“I picked out a blue bikini hoping it was the right choice, put it on and got into the line for my photoshoot,” Jacobs recalled. “I stood there nervous because I really wanted to show that a woman can pose at 55 and look good in a bikini… Once I was in front of the camera, my anxiety melted away, and I was in my comfort zone and was able to pose.”

Jacobs revealed that it was Sports Illustrated Swimsuit cover girl Camille Kostek who told her she was still in the running.

“I lost it,” Jacobs admitted. “My head bowed down, and I became a heaving, crying heap of a human being who couldn’t even look up and somehow wandered onto the stage with a mixture of gratitude, disbelief, shock, happiness and pride in myself for never giving up… It’s [kind of] funny to me that doing what I’m doing at 55 is so out of the norm. I feel so young inside and I bet a lot of women can relate to me on that level. Now I am just hoping to be the oldest member of the Final 6 in the #SISwimSearch history.”

As for Smits, who was recently crowned Miss Virginia USA 2019, she’s grateful for the chance to celebrate her body and inspire other women to embrace theirs, too.

“Working in a male-dominated field has shown me that femininity and hard work are no longer mutually exclusive,” she explained. “I was told at one point in my career, I will be forced to choose between these two worlds that don’t seem to fit together, that I ‘can’t be a model and be in the Army.’ I was told that my male superiors and coworkers wouldn’t take me seriously if I wear makeup or ‘embrace my pretty,’ and I was told by modeling agencies that I should quit the Army because ‘I am too pretty to be shot at.’ Being a part of Sports Illustrated means that I can show young girls and women that we can have it all.”

The competition is still ongoing and SI will later unveil their final six in the running. The winner will be featured in the magazine.