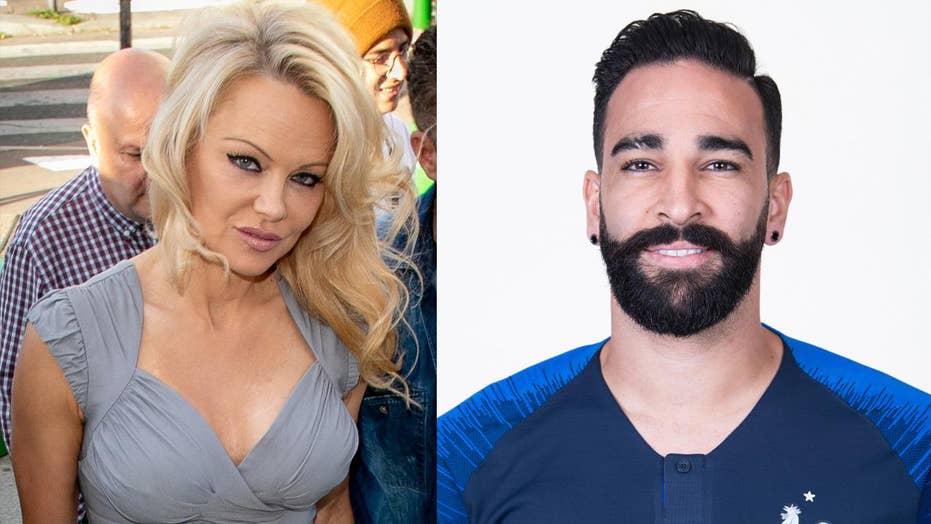 On her official blog, the 52-year-old "Baywatch" star posted a video of a doctor wrapping her hands in bandages.

"When he crushed my hands especially my right one till they cracked. It took me 6 months to go to [a doctor]," she wrote. "I told them it felt like arthritis (so this is what they put down) - (I couldn’t say he hurt me to the dr) though I did tell his sister and the concierge to Olympic De Marseille who took me what really happened. The sister just told me to be patient. That he was changing."

Anderson claimed she couldn't open a bottle or write without pain in her hands and accused him of "hurting [her] in ways you couldn't see," including grabbing her "roughly" and pinning her in place. She also accused him of taking her keys and banning her from being anywhere other men would be present.

"People that are extremely jealous are usually the ones being unfaithful," she wrote. "Now he’s actually denying any abuse."

In addition to her abuse allegations against the soccer star, Anderson accused Rami, 33, of having a "double life" and carrying on an affair with his ex and mother of his children throughout their two-year relationship.

The "Borat" actress and domestic violence survivors' advocate published a series of emails that she allegedly exchanged with Sidonie Biémont in which Biémont allegedly claims that she and Rami still had a romantic and sexual relationship while he was with Anderson.

Biémont allegedly claimed in the exchange that Rami told her his romance with the "Barb Wire" star was simply a platonic friendship being played up for press. Anderson vehemently denied that, saying that she and Rami had even purchased a home together in France.

Rami wrote a lengthy denial of Anderson's allegations on Sunday.

A source close to Anderson previously told Fox News that none of her friends wanted her to be with Rami, who they felt was too controlling — but noted that they never knew just how bad his behavior allegedly was until Anderson finally left him for good. The source also claimed that many of Anderson's close friends and family hoped she would reconcile with on-again off-again ex-husband Rick Salomon.

The actress reportedly spent her 52nd birthday with Salomon and her sons in Las Vegas over the weekend. A source said there's no official reunion yet between Salomon and Anderson, but says "he'll probably be around."

Reps for Anderson and Rami did not immediately return requests for comment.