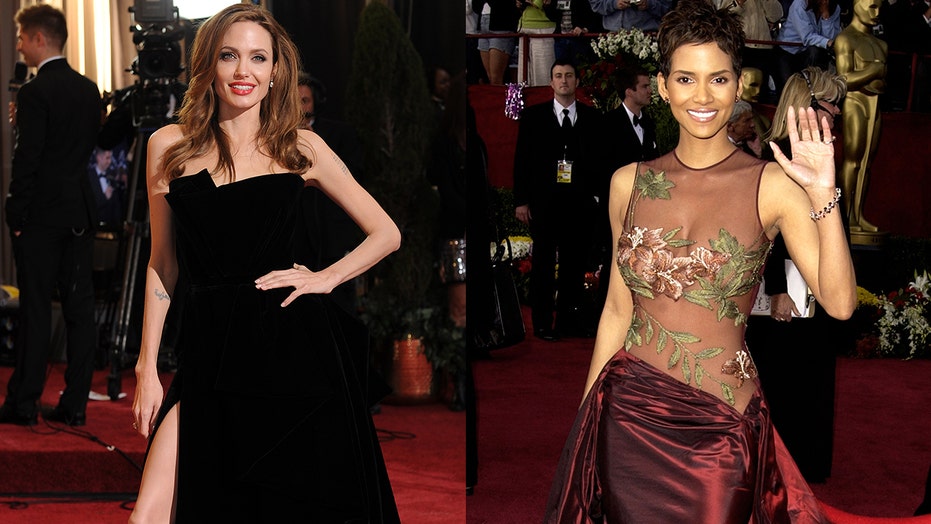 Everything to know about the 2020 Oscars

The 2020 Academy Awards are coming to a TV screen near you, here’s everything you need to know to be Oscar-ready.

The Oscars are right around the corner, and with movie's biggest night, comes incredible fashion.

From Angelina Jolie to Grace Kelly, stars have not disappointed with their style choices.

Here's a look back at the most memorable Academy Awards outfits over the years ahead of Sunday's glamorous show.

Audrey Hepburn's "lucky dress" isn't one to forget. The actress won best actress in 1954 for her role in "Roman Holiday."

Hepburn wore a nearly identical ivory lace look in the film, which was designed by legendary costume designer Edith Head.

However, for the 26th Academy Awards itself, Hepburn turned to Hubert de Givenchy to adapt the dress with a few changes, which included the addition of spaghetti straps and a lower, plunging back, according to the New York Post.

Grace Kelly's timeless icy blue dress -- created by costumer Edith Head -- is one for the books.

Kelly wore it to the 27th Academy Awards in 1955 where she won the best actress accolade for her role in "The Country Girl."

Julia Roberts' black-and-white vintage Valentino dress, featuring a sheer train, at the 2001 Oscars is a red carpet piece the actress, herself, still loves.

Roberts, who won the best actress accolade for her role in "Erin Brockovich," admitted in a 2017 interview with People magazine that she still has the dress.

In 2014, Lupita Nyong'o took home the best supporting actress trophy for her role in “12 Years a Slave," which also marked her feature film debut.

OSCARS 2020: WHERE TO WATCH AND WHAT TO KNOW ABOUT THE ACADEMY AWARDS

Ahead of her big win, Nyong’o dazzled the red carpet in a blue Prada gown that was custom-made for her.

“It was made for me,” Nyong’o told People at the time. “It’s a blue that reminds me of Nairobi. It’s a little bit of home.”

Angelina Jolie has had two memorable Oscar moments -- once in 2004 wearing an ivory, silk dress from Marc Bouwer, and the other in 2012.

Nearly 8 years ago, Jolie stepped out in a black strapless velvet Atelier Versace dress, which featured a thigh-high slit that literally stole the show that year -- and cemented itself in Academy Awards' fashion articles.

Angelina Jolie as she poses on the red carpet at the Hollywood &amp; Highland Center Theatre during the 84th Academy Awards in Hollywood, California on Feb. 26, 2012.  (Bob Riha, Jr./Getty Images)

Of her most recent iconic look, Jolie told Extra in 2019 that there actually was "a whole longer story behind" the outfit.

"I had a more complicated dress and I wore the more comfortable dress, which was that one, and I think I was just so comfortable that... I think when you feel comfortable, when you feel yourself — which is very much the theme of the film, and we know this in life — you embrace it. And sometimes, maybe it appears to be a thing, I don’t know," she said.

Halle Berry made history at the 2002 Oscars.

She became the first African American woman to win the Academy Award for best actress (for her work in "Monster Ball").

For the evening, Berry turned heads when she wore an embroidered, burgundy dress from Elie Saab.

Gwyneth Paltrow had a princess moment when she wore a pink Ralph Lauren dress at the 1999 Academy Awards.

"I just wanted to look very sweet," Paltrow once said of the classic look, according to InStyle. That year, Paltrow won the award for best actress for "Shakespeare in Love."

Jennifer Lawrence stunned in a strapless Dior Couture gown at the 2013 show, where she took home the best actress award for her work in "Silver Linings Playbook."

OSCARS: THE MOST SHOCKING (AND EMBARRASSING) ACADEMY AWARDS MOMENTS OF ALL TIME

Maneuvering in the outfit proved to be difficult though, as the actress tripped and fell on the stairs as she was walking to accept her trophy. She was able to pick herself back up and make it on stage in one piece, however.

The audience gave Lawrence a standing ovation, to which she said, "You guys are just standing up because you feel bad that I fell and that's really embarrassing, but thank you."