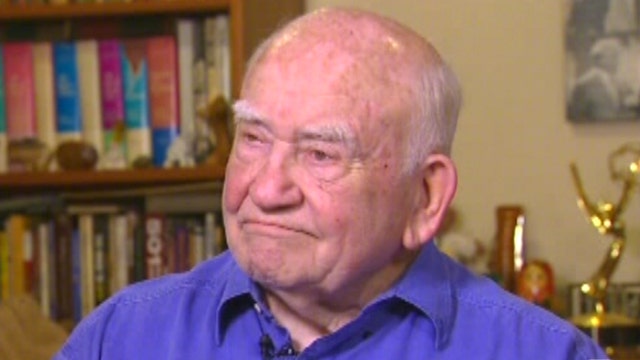 Fox411: Ed Asner reveals his thoughts on the election

Ed Asner says the cast of “The Mary Tyler Moore Show" endured plenty of ups and downs — just like a family.

“We loved each other,” the actor recently told Closer Weekly. “We forgave each other’s faults and we stayed a family for many years, though eventually the taffy finally snapped.”

When the outlet asked the 89-year-old what caused that “taffy" to break, he shrugged.

Ed Asner would move on from "The Mary Tyler Moore Show" with his own spin-off.

“I dunno,” he explained. “It’s a phrase I just made up. We just pulled and pulled and pulled, and finally, the taffy snapped and we all went our own ways. But the loyalty and dedication to each other were always there.”

“The Mary Tyler Moore Show,” which aired from 1970 until 1977, chronicled the adventures of Mary Richards, a newly single woman who heads to Minneapolis for a fresh start at TV station WJM. The sitcom starred Mary Tyler Moore, along with Gavin MacLeod, Ted Knight, Betty White, Cloris Leachman and Valerie Harper, among others. Asner played Moore’s boss Lou Grant.

According to the outlet, the show earned 29 Emmy Awards, including three for Asner in the category of Outstanding Supporting Actor in a Comedy Series. He would later win two others for the “Lou Grant” spinoff, which aired from 1977 until 1982.

American actors Mary Tyler Moore, as Mary Richards, and Ed Asner, as Lou Grant, pose for a publicity photo for the CBS comedy, "The Mary Tyler Moore Show," in 1971. (Getty)

“That show definitely had the stamp of approval,” Asner reflected. “It was a good show. I can remember when we first started out and the rest of the cast… were saying, ‘Will we make it?’ ‘Will we make it?’ What I said is, ‘I don’t give a s---. If I just keep doing scripts this good, that’s all I care about. Whether they cancel us or not isn’t important. The fact that we’ve got this good stuff to do is all that matters.’

“I think that quality work is more important than anything,” Asner continued. “People talk about the show in terms of a revolution for television, but I didn’t think in those terms. It’s just that it was well done. You just need to do good work. Of course, you never know that so much as when you’re doing good stuff and then that it’s over. Then the s--- comes in.”

Asner was eager to continue playing Grant even after “The Mary Tyler Moore Show” came to end. However, he was wary of the new castmates.

“I grudgingly accepted this new ensemble,” Asner admitted.  “I was looking to see how merited they were, and, as time went on, I realized that each in their way was as valuable, if not more so, than anyone on ‘The Mary Tyler Moore Show.’ When you look at the cast of ‘Lou Grant,’ it was a brilliant ensemble. Bobby Walden was perfect, Linda Kelsey became the belle ideal, Nancy Marchand was the best actress in the country [and] Mason Adams was perfect.

Ed Asner continues to remain outspoken about his political views.

'THE LOVE BOAT' STARS TELL ALL

“It very quickly felt like home again, and I was very proud of their work. They, in their own way, were achieving perfection that was equal to the ‘Mary Tyler Moore’ cast at least.”

Asner also revealed he developed a strong bond with his character and enjoyed playing him in two separate shows.

“I very much felt a connection with Lou Grant, and I based him very much on my two older brothers on the comedy,” he explained. “I regarded them as clowns. But when I started to do the hour show… [it] wasn’t working for me. I found that I couldn’t come up with what I needed, so then I reverted more to yours truly and used the sadder part of my nature. My somber self. My sad-sackedness. At least I used to be; not sure if I still am, because people even find my anger funny these days.

“But there were all kinds of overlaps of the character between the two shows. I won’t say that it was a total erasure and reinstallation, but I had to think it out better, think it out more because it wasn’t a situation where I could depend on the jokes.”

“Lou Grant,” like “The Mary Tyler Moore Show” was ultimately given the ax — and Asner knows why.

Asner left the newsroom, but he has since kept himself busy taking on numerous TV and film roles. He has also done voice work, particularly for 2009’s “Up.”

“I love doing voice work,” he said. “And it pisses me off that I don’t get the calls now. After ‘Up,’ it was like I died and went to heaven or something.”

Asner is also as vocal as ever when it comes to his political beliefs.

“There’s a great deal of injustice in the world,” he said. “I like to call out injustice and remark on it when I see it, and it’s very easy to see. And easy to open your mouth, though not a lot of people are willing to because there are repercussions for that, which I found out with Lou Grant. But after I stumbled through that disaster, I figured the damage was done, so I might as well continue the performance.

“I don’t lead cavalry charges down Pennsylvania Avenue, but I’ll make comments, And with the president we’ve got now, how can you not comment on this evil? It’s an unbelievable aberration. And it’s not because of him, it’s what he represents — that enormous core of self-seeking, discriminating, angry, racist people in the United States.”

Asner has pursued acting since the ‘50s — and he has zero plans to slow down.

“I’m delighted I got through most of it with my clothes on,” he said.