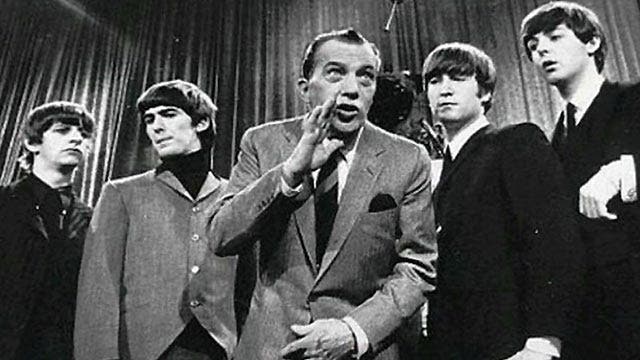 How 'The Ed Sullivan Show' boosted the Beatles to stardom

FoxBusiness.com's Natalia Angulo takes a look at the numbers behind the Beatles, from records sold to Twitter followers

Robert Precht has always known that his grandfather Ed Sullivan was special.

Precht, the eldest of the star’s five grandchildren, recently recalled to Closer Weekly how proud the TV legend was to show up for his sixth-grade production of “The Pirates of Penzance” in Scarsdale, N.Y.

“Kids were racing down the stairs trying to get his autograph, and he was good-natured about it,” Precht told the outlet for the latest’s issue currently on newsstands. “He always had time for his fans."

Precht said that despite his fame, Sullivan was always dedicated to his family and was happily married to his wife Sylvia from 1930 until her death in 1973. The couple only had one child Betty, whose husband, Bob Precht, would ultimately work as a producer for “The Ed Sullivan Show."

“They had a very good marriage, and she was his biggest fan,” granddaughter Margo Elizabeth Speciale also told Closer Weekly about her grandparents. “He was a big deal to America, but to me, he was just grandpa. I remember being on the couch in our living room and him doing little magic tricks and pretending to take his thumb off.”

Sullivan, who entertained millions of Americans as host of his long-running variety show, passed away in 1974 at age 73 from cancer.

Ed Sullivan with The Beatles, before the group's second appearance on 'The Ed Sullivan Show' on Feb.y 16, 1964 at the Deauville Hotel in Miami Beach, Fla. (Photo by Jeff Hochberg/Getty Images)

Americans across the country tuned in to Sullivan’s weekly show, which according to the New York Times cost $8 million a year to produce and for which Sullivan received $164G a year. “The Ed Sullivan Show” aired from 1948 until 1971.

Precht told Closer Weekly Sullivan gave a platform to African-American artists during an era when racial segregation was still common.

“Through his body language and the way he introduced people, he conveyed a real affection for African-American culture,” said Precht. “He created a kind of model integrated society.”

“[He was a] silent force in the civil rights movement,” added Speciale. “By having African-American performers on the show and treating them with dignity and respect, he showed acts white audiences had never heard of before who are household names today and, most importantly, he treated those artists with dignity and respect — during a time when races was the norm, challenging America to do the same.”

Harry Belafonte was one of many stars who appeared on "The Ed Sullivan Show." (Reuters)

“He had a strong sense of what was just and unjust,” added Precht. “He made his life a big stage and he educated the American public about performers and New York life.”

At the time of Sullivan’s death, the New York Times shared the TV icon “was proud of his Irish origin, of his tightly-knit family, of his Roman Catholic faith. He despised bigotry, fraud and irresponsibility. And he had the greatest respect for the power of words.”

“I enjoy what I’m doing,” Sullivan once shared about his television work. “I would have become a water skier if I could have made money honestly and with integrity.”

Ed Sullivan with The Beatles during a rehearsal on Feb. 9, 1964 for the British group's first American appearance on "The Ed Sullivan Show."  (AP Photo)

According to Closer Weekly, Sullivan’s grandchildren are determined to keep the star’s legacy alive. Precht is currently writing a biography about his grandfather, while Speciale is working on a documentary.

“When people think of him, they think of family togetherness — watching his show together,” said Precht. “It’s a legacy of shared experience that’s a unique, vanished part of America.”