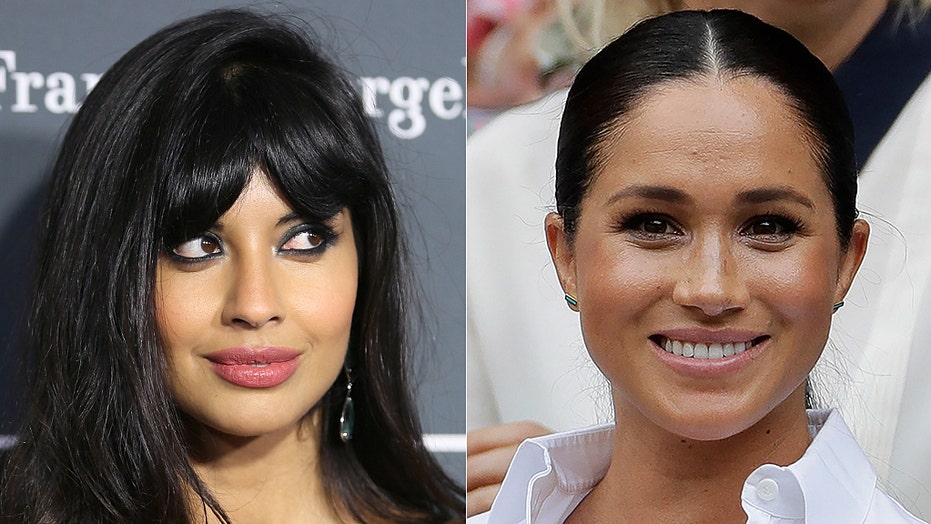 Jameela Jamil is telling all about an unexpected phone call she received from Meghan Markle.

"The Good Place" actress and outspoken activist, 33, was recently featured in the September issue of British Vogue, which was secretly guest-edited by the Duchess of Sussex herself. The theme of the upcoming issue is "Forces of Change," and highlights women who have made impactful change on a global scale.

Aside from her work in the entertainment industry, Jamil has also been a strong supporter of feminist issues and body positivity. She founded the social media campaign "I Weigh," which pushes forward messages of self-worth and mental health improvement.

In an interview with UK fashion outlet Grazia, Jamil says that although she knew she'd been chosen for the Vogue profile beforehand, she wasn't aware of Meghan's involvement until the last minute.

"We weren’t told there was a guest editor, and definitely not that it was Meghan," said Jamil of the Vogue issue. "Meghan called me herself. I missed the call three times before I finally answered, I wanted to punch myself!

"She explained that she’d guest-edited the issue, and apologized that the whole thing had been shrouded in so much secrecy," Jamil added. "She said she had chosen to feature me because she’d seen what I had been doing and was a fan. To know that she had followed my work with I Weigh meant a lot."

While most people would feel starstruck if they got called by a British royal, Jamil says that over the phone, Markle was "warm, kind and actually very LOLs," adding they both shared a passion for gender equality issues. The biggest shock, however, came when Meghan began praising her work on "The Good Place," a show in which Jamil actually name-dropped the Duchess on one occasion.

"She said she loved 'The Good Place.' I then felt immediately embarrassed that she had seen me joke about her on the show," Jamil said, referring to an instance where her character, Tahani, claimed to have set up Meghan with Prince Harry. "She said she’s grateful to Tahani for introducing her to Harry. I just replied, 'You’re welcome.'"

Jamil concluded the interview by reflecting on her journey towards her dream of being featured in the magazine.

"I was a teenage anorexic model and all I wanted was to be in Vogue," Jamil confessed. "But it took me gaining 30lbs, to be in my thirties, and to be fighting against those very things to actually manage it. Here, our minds, talent and contribution were the focus, rather than our looks – and that is so important."

In a statement released upon the issue's reveal, Duchess Meghan says, "These last seven months have been a rewarding process, curating and collaborating with Edward Enninful, British Vogue’s Editor-in-Chief, to take the year’s most-read fashion issue and steer its focus to the values, causes and people making impact in the world today."

She continued, "Through this lens I hope you’ll feel the strength of the collective in the diverse selection of women chosen for the cover as well as the team of support I called upon within the issue to help bring this to light. I hope readers feel as inspired as I do, by the ‘Forces for Change’ they’ll find within these pages."