Meghan Markle added another job title to her impressive resume, which runs the gamut from calligrapher to "Deal or No Deal" model to "Suits" star to philanthropist and Duchess of Sussex: She's now the guest editor of Vogue U.K.'s all-important September issue.

The theme of Duchess Meghan's featured issue of the fashion bible is "Forces for Change," focusing on women who've made a difference in the world. The cover features photos of all the women profiled in the piece, as well as a small mirror to inspire readers to be their own forces for change.

Within the issue are also interviews with Michelle Obama and Jane Goodall, who recently met with Prince Harry and his and Duchess Meghan's son Archie. 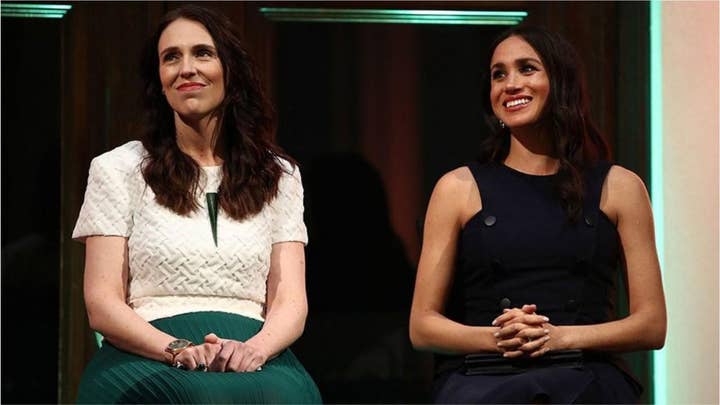 Duchess Meghan herself doesn't appear on the cover.

Vogue U.K. editor-in-chief Edward Enniful said of the choice, “From the very beginning, we talked about the cover — whether she would be on it or not. In the end, she felt that it would be in some ways a ‘boastful’ thing to do for this particular project. She wanted, instead, to focus on the women she admires."

Duchess Meghan, 37, said in a statement, “These last seven months have been a rewarding process, curating and collaborating with Edward Enninful, British Vogue’s Editor-in-Chief, to take the year’s most-read fashion issue and steer its focus to the values, causes and people making impact in the world today.”

MEGHAN MARKLE HAS STRUGGLED WITH 'INTENSITY OF THE SPOTLIGHT'

She continued, “Through this lens I hope you’ll feel the strength of the collective in the diverse selection of women chosen for the cover as well as the team of support I called upon within the issue to help bring this to light. I hope readers feel as inspired as I do, by the ‘Forces for Change’ they’ll find within these pages.”

Cox wrote on Instagram, “I am completely overwhelmed and overjoyed to share this cover. Being on the cover of Vogue magazine has been a dream of mine since I was a child. To get to share this cover with this group of women who inspire me, who are truly forces for change is deeply humbling. That it’s @britishvogue is even more special to me because British Vogue was the first to feature a black model on its cover, Donyale Luna in May 1966. Thank you so much @edward_enninful and guest editor Her Royal Highness, The Duchess of Sussex for including me. Thank you to the entire team at Vogue for making this experience truly divine. #TransIsBeautiful.”

Shahidi also thanked Duchess Meghan for being featured, writing,  “Thank you @edward_enninful and the amazing HRH Meghan Markle, Duchess of Sussex @sussexroyal for considering me one of the #ForcesForChange for @BritishVogue, amongst these incredible change makers, and for using this iconic platform to continue to shift narratives and expand the role of fashion.”

Gemma Chan also expressed her joy at being a cover girl.

“Proud and honored to be included as one of the fifteen #ForcesForChange featured on the cover of the September 2019 issue of @BritishVogue, guest-edited by HRH The Duchess of Sussex @SussexRoyal,” the actress wrote.

Duchess Meghan shared a video preview of her "Forces for Change" collaboration and wrote on her @SussexRoyal account, “Guest editing the September issue of British Vogue has been rewarding, educational and inspiring. To deep dive into this process, working quietly behind the scenes for so many months, I am happy to now be able to share what we have created. A huge thanks to all of the friends who supported me in this endeavor, lending their time and energy to help within these pages and on the cover. Thank you for saying “Yes!” - and to Edward, thank you for this wonderful opportunity.”