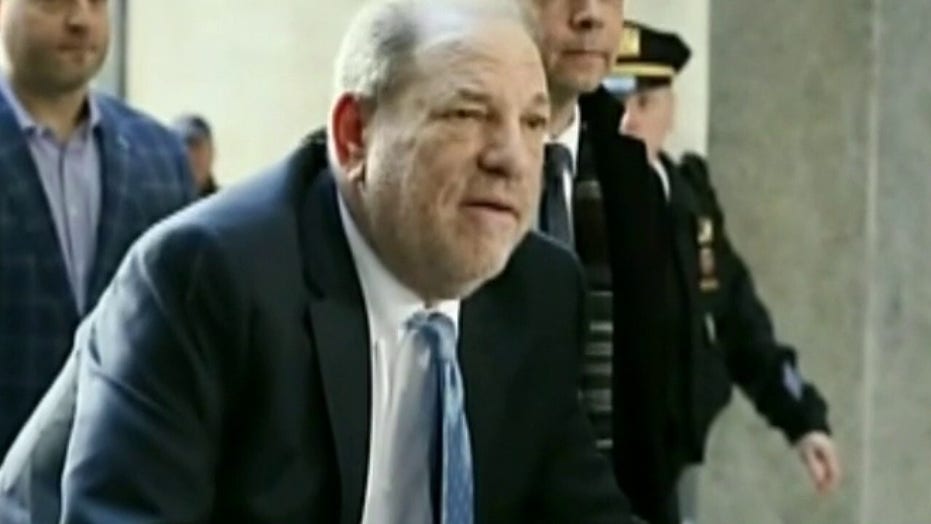 Convicted rapist Harvey Weinstein is being moved to the North Infirmary Command at Rikers Island after undergoing a heart procedure, where he will remain through his sentencing on March 11.

A representative for the disgraced movie mogul told Fox News on Thursday Weinstein "is being moved to Rikers as we speak." He added that Weinstein, 67, underwent a heart procedure and "is now fit" to be moved to Rikers.

Weinstein was found guilty of rape and sexual assault against two women before being led away in handcuffs on Feb. 24.

After he was remanded to jail and the verdict was read in court, Weinstein was transported to Bellevue Hospital in an ambulance after experiencing heart palpitations and high blood pressure.

Harvey Weinstein leaves a Manhattan courthouse during a break in jury selection for his rape trial in New York, Thursday, Jan. 16, 2020. (AP)

Weinstein's attorneys earlier had objected to their client being sent to Rikers because of his poor health. New York Supreme Court Judge James Burke said he would make a judiciary request for Weinstein to stay in the Rikers infirmary.

Martin Horn, a former city corrections commissioner, said that despite its name, the infirmary is more like a regular jail than a hospital unit. Built in 1932 as the original Rikers Island Hospital, the infirmary now has smaller 10-cell blocks that are used for protective units for inmates who might be targets in the general population, such as sex offenders and former law enforcement officers.

Weinstein was found guilty of third-degree rape of Jessica Mann, an aspiring actress, in a New York City hotel room in 2013. He was also found guilty of a criminal sex act for assaulting production assistant Mimi Haleyi at his apartment in 2006. The charges carry a maximum penalty of 29 years in prison.

The jury of seven men and five women deliberated for five days before handing down the verdict. The disgraced film producer was acquitted on the most serious charges, two counts of predatory sexual assault.

HARVEY WEINSTEIN ACCUSER CAITLIN DULANY RESPONDS TO GUILTY VERDICT: ‘I HAVE A RENEWED SENSE OF JUSTICE’

The case marks the only criminal trial to stem from many accusations that came out about Weinstein following a bombshell expose written by Ronan Farrow in 2017.

Following the verdict, Weinstein attorney Donna Rotunno vowed to file for an appeal "as soon as possible" as she told reporters her client is "tough and strong" despite his "difficult" medical condition.

"Harvey is unbelievably strong. He took it like a man," Rotunno said. "He knows that we will continue to fight for him, and we know that this is not over."

Weinstein still faces two charges in California of raping a woman at a Los Angeles hotel in 2013 and sexually assaulted a different woman in a Beverly Hills hotel the next night. Eleven other women alleging sexual misconduct by Weinstein told reporters last month they hope to testify against him at that trial.

Weinstein, the product of a working-class family from Queens, achieved success with two movie studios he created with his brother Bob: Miramax -- named for their parents, Miriam and Max -- and then the Weinstein Co.