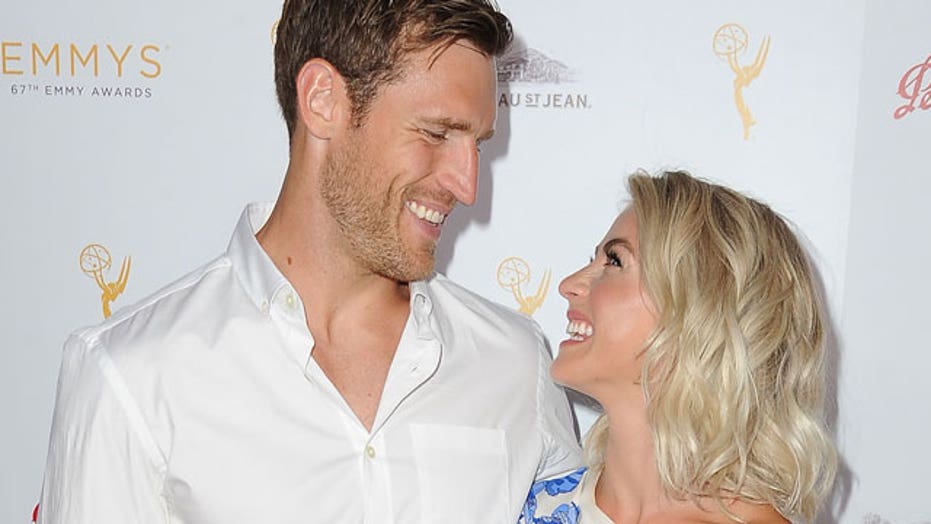 Brooks Laich is speaking out about an issue he's experienced during his marriage to Julianne Hough.

In a recent episode of his iHeartRadio podcast "How Men Think," which he co-hosts with singer Gavin DeGraw, the NHL hockey player discussed his professional dancer wife's decision to keep her maiden name when the couple wed two years ago.

"I don’t find it disrespectful,” Laich said of his wife. "I’m obviously open to it, but at the start, yeah, it was a little jarring for me."

Laich, 36, went on to reveal that while he looked forward to Hough, 30, taking his last name once they tied the knot, he admitted the issue has been an "ongoing discussion" during the majority of their relationship.

"When we first met and got engaged and stuff, we had this conversation and I was like, ‘I want you to take my last name," the athlete recalled. "I said that. It was important to me."

The former Los Angeles Kings player, who is now a free agent, confessed that he and Hough have never truly "resolved the issue," but said the topic would most likely become more prevalent if the two ever have children.

"To me right now, it’s not that big of an issue,” he said on the podcast. “We don’t have any kids right now, but she doesn’t have my last name."

Laich went on to discuss his opinion on the matter, saying, "I will say I didn’t think that initially — I figured it would be an issue — but I’m surprised for myself now that it’s not an issue. But, it will be interesting to see when we have kids. When we have children, I would want them to have my last name, our last name.

"I’m actually kind of surprised that it hasn’t become an issue in our relationship because I do, as a man, I take pride in the last name and being, having that last name as the family name and especially when we have kids, I think that will amplify," he continued.

Laich ended the discussion by saying that while he won't force the current "America's Got Talent" judge to change her last name, he admitted it would be the most ideal outcome.

"To be fully honest, I would like my wife to have my last name, whether it’s now or sometime in the near future or far future," he said.

In June, Laich spoke to People about his marriage to the "Dancing with the Stars" champion, and looked forward to their then-upcoming two-year anniversary, which they celebrated earlier this month.

"The first thing I always remember is that my wife is my best friend in the world," he told the outlet. "I want more for her than I ever want for anybody else, and that includes myself. So if she’s having success or she loves something, I want to support that as much as possible because I want my best friend in the world to have the greatest life."

Hough expressed similar admiration for her husband in an Instagram post on Tuesday, writing that their occasional relationship struggles are "what makes life interesting."

"Everyday is a wild adventure with you, all the ups and downs and the in betweens are what make life interesting!", Hough captioned the photo. "Thank you for being my greatest challenge in life, aka why I married you!"