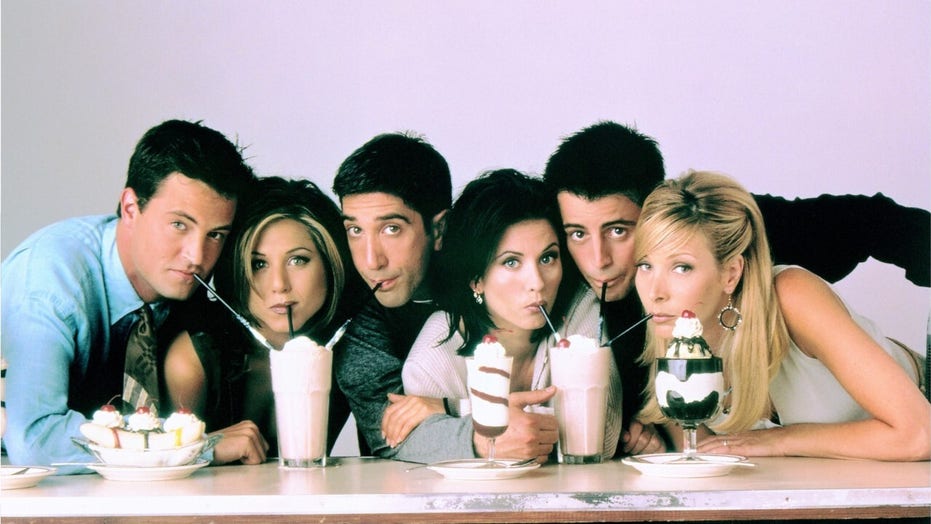 'Friends' fans get an inside look at the lives of their favorite actors when they follow them on Instagram. Here's a look at some of the best cast reunions on Instagram.

Now that Matthew Perry has officially joined Instagram, "Friends" fans have a constant flow of content from the famous crew.

Among the photos that the stars shared online are the heartwarming throwbacks and ever-popular reunion pics featuring castmates spending time together years after the show's end.

Whether it's for a recent hangout or a throwback post, here's a look at some of the best "Friends" cast reunions on Instagram.

Leave it to Jennifer Aniston and her co-stars to break the Internet.

In October 2019, the 51-year-old actress joined Instagram, sharing a photo of herself and her "Friends" castmates.

Aniston broke the record for earning 1 million followers the fastest, doing so in about five hours.

After spending some time with her gal pals Courteney Cox and Lisa Kudrow, Aniston shared a photo of the reunion on Instagram.

"Hi from the girls across the hall," the caption read.

The photos featured the three leading ladies smiling and laughing while holding each other close.

Kudrow, 56, also marked the occasion with an Instagram post, writing "Bliss. And more bliss," in the caption.

JENNIFER ANISTON TURNS 51: A LOOK BACK AT HER BIGGEST MOMENTS

She shared a photo of herself and Perry from back in the day, alongside a clip from "Friends" in which Rachel and Monica struggle to remember what Chandler does for a living.

"I'm shocked Matty is the last to join Instagram, considering he was a uh... umm....oh crap," she teased in the caption. "Oh! A computer processing TRANSPONSTER."

Kudrow welcomed her pal to the platform as well, writing, "Can’t believe my eyes MY EYES" alongside a throwback photo of herself and Perry.

Even after all these years, the co-stars of "Friends" can still make each other laugh.

Alongside a photo of the pair laughing, Cox, 55, revealed that she and Kudrow had spent a girls' night together.

"Saturday night with a friend," Cox said in the caption.

Kudrow also shared a snap from the evening, clearly taken while the two were laughing very hard, writing "My eyes! My eyes!" in the caption.

Courteney celebrates with the girls

Cox got to spend some time with her fellow female co-stars to celebrate her birthday in 2019.

"How lucky am I to celebrate my birthday with these two???" she said in the caption. "I love you girls. So much."

In the photo, Cox, Kudrow and Aniston embrace one another with smiles on their faces.

To celebrate the success of "Friends" after 25 years, the cast took to Instagram to thank their fans.

In the throwback photo, Matt LeBlanc and his castmates walk arm-in-arm down the street during their days on the show.

"Celebrating a Thursday night 25 years ago. Seems like yesterday," LeBlanc, 52, wrote in his caption. "Thanks to all the fans for watching."

Kudrow posted the same photo, noting that the cast is still "connected."

"You’ve certainly been there for us! I love these guys!" said Cox, sharing the same photo.

Even David Schwimmer, 53, shared the photo, saying "THANK YOU to all the fans out there!!"

Reuniting with friends is always a reason to celebrate.

After a particularly special evening with her pals, Cox shared a photo of herself, Aniston and LeBlanc.

In the caption, Cox said: "A rare night and I love it."

'FRIENDS' ACTRESS WHO PLAYED EMMA REFERENCES CHANDLER'S JOKE ABOUT HER, 2020

When Aniston joined Instagram, Cox was among those that jumped on the opportunity to welcome her to the app.

In a throwback photo of Aniston hugging her, the pair could be seen smiling.

Monica and Chandler go to lunch

The relationship between Monica and Chandler was a pivotal one on "Friends," so there's no doubt that fans were delighted to see the pair's real-life counterparts still had a strong friendship.

In the weeks before Perry joined Instagram, Cox shared a selfie with him after the two grabbed some food.

"Guess who I had lunch with today....I KNOW!!" she said in the caption. "Could I BE any happier?"

As Aniston turned 51, Cox shared a photo of herself donning a blonde wig while standing next to the "Murder Mystery" star.

"No matter how hard you might try... there’s only one Jennifer Aniston," she said in the caption. "Happy birthday my dear friend @jenniferaniston! I love you!"

Kudrow and Cox reunited at a Christmas party, where Cox got creative with her facepaint.

Kudrow showed of the paint job, a fried egg on Cox's forehead, on Instagram, writing, "Again Court???" in the caption.

Cox posted a video from the same evening, referencing the Beastie Boys song "Egg Man" as the inspiration for her body art.

FREDDIE PRINZE JR. SAYS TOM HANKS WAS SUPPOSED TO PLAY SANDY IN 'FRIENDS': 'HE WASN'T GONNA MAKE IT IN TIME'

Perry is still relatively new to Instagram, so he doesn't have many posts yet.

One of his earliest Instagram photos, however, was a throwback pic used to wish Jennifer Aniston a happy birthday.

"Happy birthday, Jenny!!!" reads the caption of the photo, which shows Aniston and Perry smiling and embracing.

After it was announced that the "Friends" cast would return for a one-hour special on HBO Max, each cast member -- except for LeBlanc who posted his own version of the reveal -- took to Instagram with the same announcement.

They each posted a photo of the six main castmembers in dressed in vintage clothing in a convertible car.

"It's happening," they all wrote in the caption.