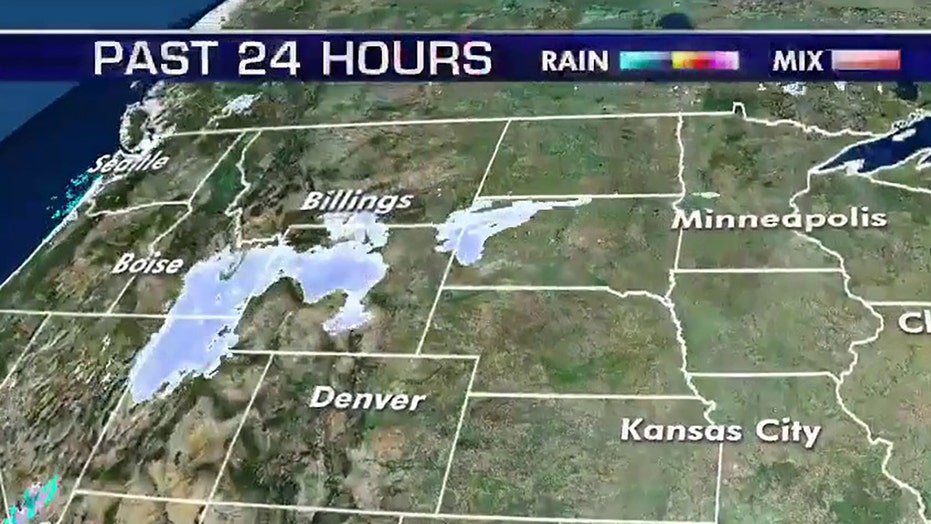 Much of the country may be enjoying a mild winter at the start of February, but a major change is about to sweep across the United States.

The National Weather Service said a winter storm system will track from the Rockies starting Monday all the way through to the East Coast over the course of this week.

"Weather hazards include: heavy snow over the western mountains, strong winds in the Southwest, severe thunderstorms in the South, ice and heavy snow from the southern Plains to the Northeast," the NWS said.

The NWS Weather Prediction Center said that "widespread snow" is in the forecast across parts of Idaho, Wyoming, Utah and Colorado, where winter storm warnings and winter weather advisories are in effect.

A storm system is forecast to bring snow across the Rockies before moving into the Plains. (Fox News)

"The heaviest snow is expected to fall across the higher terrain of central Wyoming and north central Colorado, with up to a foot of accumulation possible," forecasters said.

Numerous schools in the Salt Lake City area were closed on Monday after periods of heavy snow were forecast to impact the Monday morning commute, according to FOX13.

Denver is forecast to see several inches of snow through Tuesday. (Fox News)

In Colorado, temperatures on Sunday reached 71 degrees in Denver, as the NWS office in Boulder warned that an "abrupt change" was on the way.

Freezing drizzle across the Plains was expected to change over to snow by late morning, followed by heavy periods of snow through Tuesday stretching from Fort Collins southward to Colorado Springs. Denver may see a total of 6 to 8 inches of snow by the time the storm moves out.

Officials expected the snow to have the biggest impacts on the Monday evening and Tuesday morning rush hours. The Colorado Department of Transportation said that blowing snow and poor visibility in the mountains will be the biggest risks.

“Motorists are encouraged to consider leaving work early tomorrow afternoon or working from home to avoid a snow-packed and icy commute,” CDOT said in a statement to FOX31.

CDOT said that crews have been assigned "around-the-clock" snow shifts starting on Monday morning, and that road closures for safety are possible.

The storm system is forecast to move to the East Coast by the end of the week. (Fox News)

“All available resources will be utilized," CDOT said. "As snowfall rates increase, crews will focus on primary roads and reduce levels of service on secondary roads in an effort to reduce impacts to the main highways."

Precipitation will shift east throughout the week. (Fox News)

The storm is forecast to move into the Southern Plains by Tuesday into Tuesday night, impacting western Nebraska, Oklahoma and west Texas.

While the storm system is forecast to move east, it will not impact the Iowa Caucuses on Monday.

The forecast in Iowa on Monday. (Fox News)

No precipitation is forecast in the state on Monday, with mostly clear skies with seasonal highs in the 30s and 40s, according to Fox News Senior Meteorologist Janice Dean.

"They've got mostly sunny skies in their forecast," Dean said on "Fox & Friends." "We do have a storm to the west of them, but it's not going to affect anything."

Dean added that there's "no reason to not get out there" today since the weather in Iowa is going to be "spectacular."