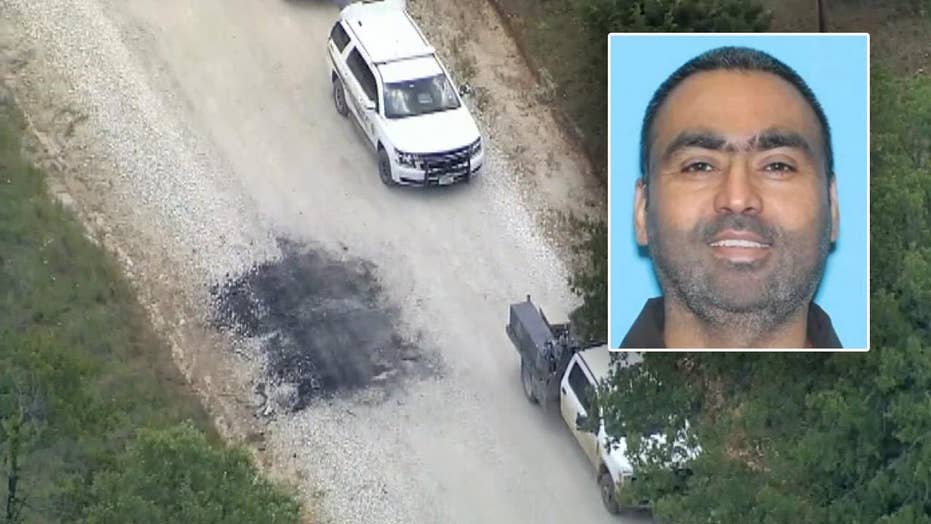 Manhunt for murder suspect Mandeep Singh ends after his body was discovered near the original crime scene. His children were found dead inside a burning car the day before.

A Texas man sought in the deaths of two children who were discovered inside a burning car was found dead Monday, officials said.

The Cooke County Sheriff's Office has said in a Facebook post that 37-year-old Mandeep Singh of Fort Worth was sought after a vehicle was discovered Sunday on fire in the middle of a roadway in the rural northwest area of the county about 18 miles northwest of Gainesville.

Firefighters put out the flames and discovered the bodies of the two children in the backseat.

A relative told FOX4 the victims were two children, ages 3 and 5, and that Singh was their father.

The body of Mandeep Singh of Fort Worth, Texas was discovered Monday in a wooded area not far from where a vehicle with the bodies of 2 children was found the previous day. (Cooke County Sheriff's Office)

Authorities initially said Singh was considered to be "armed and dangerous" before his body was discovered in a wooded area on Monday not far from where the car was discovered burning.

Cooke County Sheriff Terry Gilbert said that Singh had been wanted on a capital murder charge and that an autopsy has been ordered to determine what caused his death.

No additional details were given about what may have caused him to kill his children.

Court records obtained by FOX4 said that Singh was charged with family violence in 2016 and received two years deferred adjudication.