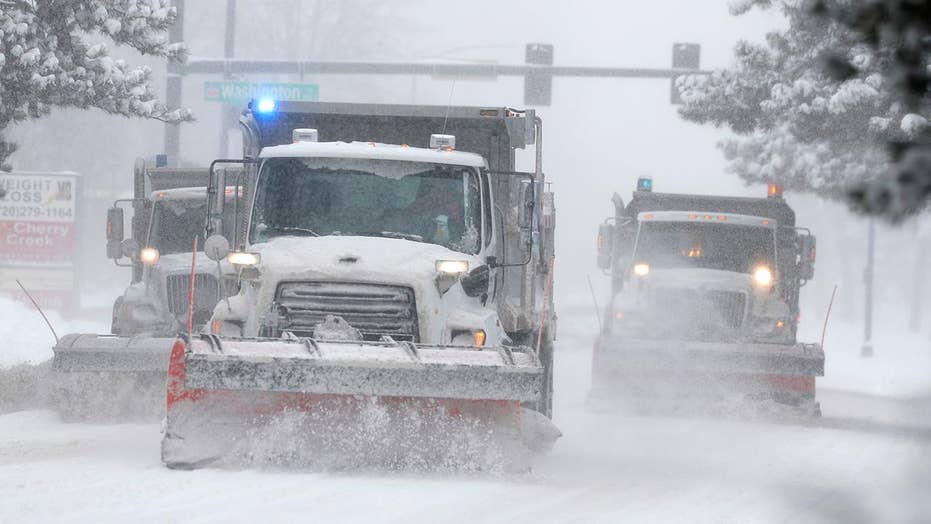 Millions of Americans are keeping a close eye on two major storms forecasted to create travel nightmares across the country this Thanksgiving; Matt Finn reports from Chicago's O'Hare International Airport.

A powerful storm making its way from California could cause major disruptions for millions of travelers across the country hoping to get home after the Thanksgiving weekend.

The National Weather Service said travel could be impossible in some parts of the country as ice or flash flooding continues to cover swaths of the country.

The storm was expected to head east throughout the weekend into the Plains on Friday, the Midwest by Saturday and Northeast on Sunday.

Street signs are covered in snow in north Flagstaff, Ariz., on Friday. A powerful storm making its way east from California is threatening major disruptions during the year's busiest travel weekend, as forecasters warned that intensifying snow and ice could thwart millions across the country hoping to get home after Thanksgiving. (Cody Bashore/Arizona Daily Sun via AP)

Sunday will be particularly disruptive as millions of holiday travelers are expected to head home. One traveler asked the weather service via Twitter on Friday if it was advisable to drive to Duluth, Minn., over the weekend.

“If you are in Duluth by tonight, you will likely be stuck there until at least Sunday afternoon due to heavy snow and blizzard conditions," the agency warned.

Airlines for America, the airline trade industry's trade group, expects 31.1 million passengers to take to the skies Sunday. Multiple airlines said they were operating on Friday as usual.

Delta Airlines said weather could disrupt travel at airports in the upper Midwest on Saturday and the northeast on Sunday and Monday.

It offered to let customers cancel or reschedule flights. American Airlines issued similar offers in Rapid City, S.D. Sections of the state were under a blizzard warning and could see as much as two feet of snow.

Authorities in the state reported a fatal crash after a driver lost control on an ice-covered road. A 37-year-old passenger died after a truck slid into a ditch and rolled over.

Highways elsewhere were shut down. Drivers in California were left stranded and authorities in Arizona pleaded with travelers to wait out the weather.

The weather service issued warnings Friday from Montana to Nebraska to Wisconsin. It anticipates heavy snowfall in parts of Utah, Colorado, Montana and Wyoming. Strong winds and snow became an issue earlier this week when 60 vehicles were involved in a massive pileup in Utah.

Northern Michigan University reopened its residence halls two days early to give students options as forecasters predicted a foot or more of snow in the region. 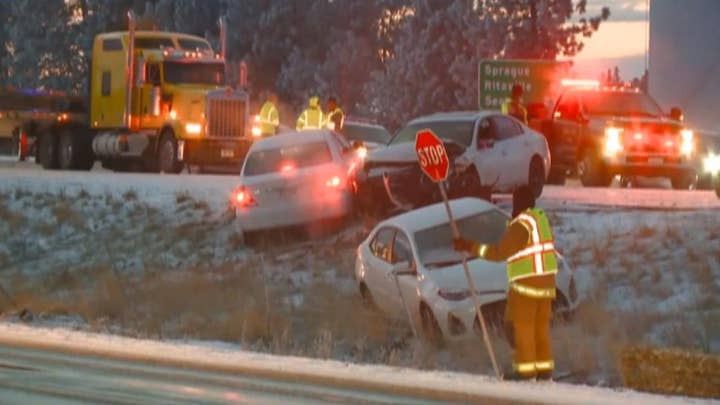 “We want to make people aware of what they could be driving into,” campus police Chief Mike Bath said.

The West Coast was slammed with winter storms earlier this week, causing thousands of flight delays. Up to four feet of snow was dumped in mountainous areas of the Pacific Northwest and Denver was clobbered by a storm Tuesday.