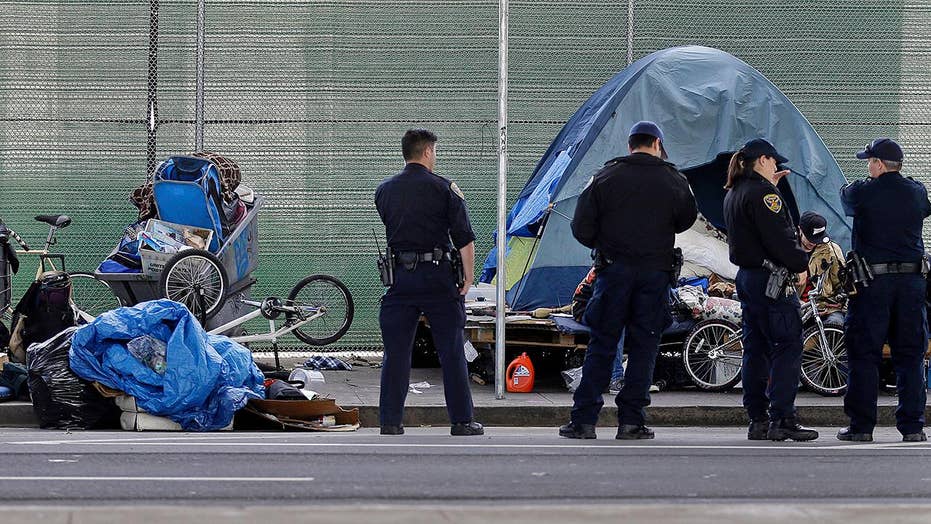 Mayor London Breed pushes for conservatorship that would allow the city to force someone into treatment.

Officials in San Francisco decided Tuesday to back a plan allowing the city to force some people with serious mental illness and drug addiction issues into treatment -- but the program is coming under intense criticism in uber-liberal California for what some say is a deprivation of individual civil liberties.

The city's Board of Supervisors voted 10-1 on the proposal for a pilot program after months of debate, which initially would apply to a handful of people, pending legislation at the state level, and then could expand.

San Francisco Mayor London Breed and other supporters of the plan -- which is known as conservatorship — say it is necessary to help people who are often homeless, addicted to drugs or mentally ill and either have no means or no desire to get off the streets, which the plan's proponents say makes them a danger to themselves and others.

San Francisco Mayor London Breed says it's inhumane to let addicts languish on the streets, but homeless advocates say the measure to force mentally ill drug addicts into housing and treatment for up to a year is extreme and a violation of civil rights. (AP Photo/Ben Margot)

“This is an important step that will help people on our streets get the treatment they need rather than continuing to cycle in and out of the emergency room, and often the criminal justice system,” Breed said in a statement after the vote. “Conservatorship will allow us to finally break this cycle by providing sustained care, which is why we are also expanding our treatment beds and other resources to address the issues that these individuals face."

The pilot program would allow a court to appoint a public conservator for someone who has been involuntarily detained for psychiatric hospitalization at least eight times in a year, with treatments that could last for as long as a year. It also included a proposal by Breed for more money to fund additional beds in treatment centers.

The city has long suffered from exorbitant rent costs, pricing out large swathes of even working professionals, nevermind those living below the poverty line. It also has seen a recent surge in the number of homeless people — some with disturbing behavior tied to drugs, schizophrenia or bipolar disorder. They shuffle from the streets to jail and psychiatric care, unaware they need steady treatment, sometimes dashing into traffic or screaming at strangers.

"What you see on our streets, what you see playing itself out on the street is a crisis," Breed told KTVU before the vote. "And we have to do something a lot different than we have in the past."

"Too many people are deteriorating and dying on San Francisco's streets, and we have a moral responsibility to help them," he said in a statement after the vote. "It's neither progressive nor compassionate to stand by while people die. We need to offer voluntary services to those in need. But for people incapable of accepting services, we need to consider helping them via conservatorship."

Drugs, feces in plain sight on the streets of San Francisco

Fox News contributor Lawrence Jones witnesses needles, drug use and human waste on the streets of San Francisco and talks to residents about the escalating problem.

Only about five people could be forced into treatment in San Francisco under the newly-passed plan, according to Rachael Kagan, spokeswoman for the city's Department of Public Health. But Wiener's new bill could bump that up to 55, which is the number of people who now fit the definition for at least involuntary holds. San Francisco's health department has identified an additional 48 people on the fringe who have been involuntarily detained six or seven times.

Supervisor Shamann Walton was the lone "no" vote against the plan, telling the San Francisco Chronicle he was concerned about how it could affect the city's African-American population and noted police officers are often the ones to initiate temporary psychiatric holds.

Steve Hilton: San Francisco is a civic catastrophe and it is entirely the responsibility of the Democrats and the self-righteous Big Tech overlords who slavishly back them.

“For me it is still troubling to note that, typically, policies that force individuals into a scenario where their freedom is taken, tends to affect black people and people of color disproportionately,” he told the paper.

Critics of the proposal have said that, despite good intentions, conservatorship means stripping people of their rights to make decisions for themselves, which goes against the progressive principals of the city. They also say, practically, it would lead to locking up people in facilities that San Francisco lacks the resources for.

"We are concerned about ensuring that persons receive mental health treatment and services in their communities, in supportive housing, in supportive environments — and not in facilities," Curt Child, legislative director of Disability Rights California, told the Associated Press. "This is a major civil rights issue in the sense of confining people against their will."

San Francisco supervisors vote Tuesday on a pilot program allowing the city to force mentally ill drug addicts into housing and treatment for up to a year. (AP Photo/Eric Risberg)

The San Francisco pilot plan appeared to also contradict a message by California Gov. Gavin Newsom over the weekend at the California Democratic Convention, where he boasted that "California’s what happens when rights are respected. When work is rewarded. When nature’s protected. When diversity is celebrated and free markets are fair markets."

Homeless advocates have also raised concerns over plans that may expand the number of people that fall under expanded conservatorship.

“Pretty disheartening, when you’re talking about a really serious issue, taking away people’s civil liberties,” Jennifer Friedenbach of the Coalition on Homelessness told KPIX-TV. “We want to do something that actually works, that’s not just a fake political move.”

Last fall, voters in San Francisco backed a plan 60 percent to 40 percent to tax rich companies in order to double the current budget to fight homelessness. Salesforce founder and co-CEO Marc Benioff was a major backer of Proposition C, which imposed a corporate tax on businesses with over $50 million in revenue to fund the city’s homeless facilities and services.

On Tuesday, officials in Southern California revealed that the homeless population Los Angeles County jumped 12 percent over the past year, despite $619 million in government spending to help alleviate the problem. Supervisors in San Diego and Los Angeles counties have not officially considered a plan similar to San Francisco's.