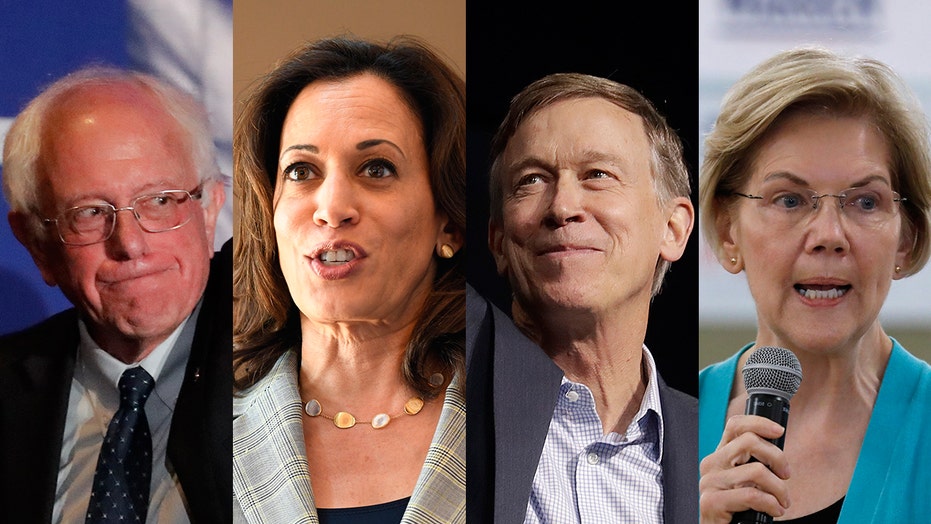 Fourteen presidential hopefuls rallied at the California Democratic Convention in San Francisco on Saturday, taking shots at President Trump and outlining their platforms to attract votes from thousands of activists, party delegates and guests in attendance.

They also faced a particularly animated crowd, complete with chants, heckles and even one stage-jumper.

Among the candidates was Vermont Sen. Bernie Sanders, a Democratic socialist making his second run for the White House. Sanders, I-Vt., boasted of legislative initiatives to raise the national minimum wage and create a government-run universal health care system.

For his own part, former Colorado Gov. John Hickenlooper, who has taken a moderate stance on major policy issues, took aim at ideas like Sanders', at his own peril.

"If we want to beat Donald Trump and achieve big progressive goals socialism is not the answer," he said. Hickenlooper had to pause numerous times, his remarks interrupted by boos.

The event in California represents a huge opportunity for the dense field of Democratic candidates to appeal to voters and raise money for their campaign bids, with nearly 5,000 people in attendance.

Missing from the lineup of speakers was former Vice President Joe Biden, who instead opted to attend a previously arranged speaking engagement at a Human Rights Campaign event in Ohio.

On her own turf in California, Sen. Kamala Harris used the convention to emphasize the fight ahead.

Harris is among the Democratic candidates who have urged lawmakers to initiate impeachment procedures against Trump. (Several of the White House hopefuls have taken that position in the aftermath of the special counsel inquiry into Russian meddling in the 2016 elections.) She reiterated that call at the summit.

"We need to begin impeachment proceedings and we need a new commander in chief!" Harris said at the closing of her speech.

But if her remarks were animated, so was the reception from the crowd, which included many activists. At one point, Harris was interrupted by a man wearing a “join the animal rights movement” T-shirt; he jumped up on the stage and snatched the microphone from her as she spoke during MoveOn's Big Ideas Forum.

Harris then left the stage, and the man was carried off by three security officers. At that point, she was able to return and continue her forum.

MoveOn later issued on apology to Harris on Twitter saying "We sincerely regret that a protestor was able to gain access to the stage at our forum today & we apologize to Sen Kamala Harris."