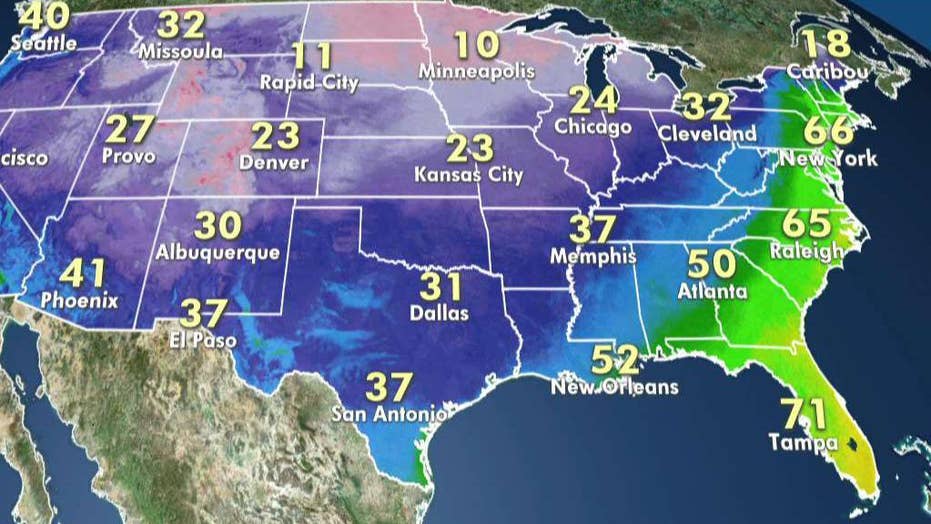 Two first responders in Texas are among the 11 dead after a storm system spawned severe weather across southern parts of the U.S. while blanketing northern regions with a dangerous icy mix and gusty winds that have knocked out power to thousands.

Officials in Lubbock, Texas said a police officer and two firefighters were hit by a car while working the scene of a traffic accident Saturday morning on the northbound lanes of Interstate 27 at Drew Street in dangerous conditions caused by winter weather.

Police Officer Nicholas Reyna, 27, who had been with the department for one year, died at the scene. Firefighter Lt. David Hill, 39, was taken to a local hospital where he later died. Firefighter Matthew Dawson, 30, was hospitalized in critical condition.

"It is not possible to express the hurt we all feel from the death our own officer, and the death and injuries to our firefighter brothers, and the grief of their families and friends," Lubbock Police said on Facebook.

Lubbock Firefighter Lt. David Hill (left) and Police Officer Nicholas Reyna (right) were killed when they were hit by a vehicle while responding to a series of crashes on an interstate as wintry weather was reported in the area. (Lubbock Fire Department and Police Department)

“If people would respect road conditions, things like this wouldn’t have to happen,” Lubbock Fire Chief Shaun Fogerson told reporters.

The Lubbock Fire Department said that Hill had just recently celebrated 10 years of service with the department and was promoted to a lieutenant in July. Dawson has been serving as a firefighter for five years and is still hospitalized after the crash.

"Please join us in keeping these families and our LFR family in your thoughts and prayers," the fire department said.

Another person had died in Texas Friday night when a car flipped into a creek in Dallas as severe thunderstorms passed through. Lightning from Friday's stormy weather was suspected of causing fires that burned two houses but caused no injuries in the North Texas cities of Burleson and Mansfield.

The weather that left at least 11 dead in several states was part of the same storm system that caused flooding, icy roadways, spawned a deadly tornado in Alabama and produced winds struck enough in Louisiana that a trailer home was lifted off its foundation and carried several hundred feet.

"That storm system is the one that's been sweeping across the country, we saw heavy rain here in New York City just a couple hours ago," Fox News Meteorologist Adam Klotz said Sunday morning on "Fox & Friends."

Scarlett Faulk looks at a Bible belonging to one of her brothers that she pulled out of from a destroyed building on her family's land on Saturday, Jan. 11, 2020, in southern Lonoke County, Ark. (Tommy Metthe/The Arkansas Democrat-Gazette via AP)

Klotz said the storm system is moving further east, with conditions "looking better in the next couple of days."

The storm system was moving out east by Sunday morning. (Fox News)

"At this point, really nothing but rain and maybe a little bit of snow in New England," Klotz said Sunday. "This is going to be wrapping out and moving out."

As the storm system moves out forecasters from the National Weather Service's Weather Prediction Center warn that gusty winds are anticipated, spawning wind advisories across a large portion of the eastern U.S.

Severe storms sweeping across parts of the U.S. South were blamed for deaths and destruction, such as this unoccupied business on Main Street in downtown Greenville, Miss. on Saturday. (Catherine Kirk/The Delta Democrat-Times via AP)

About 68,000 customers were without power in New York on Sunday morning, according to PowerOutage.us. Major outages were also reported in states such as North Carolina, Alabama, West Virginia, and Mississippi.

The storm, bringing the threat of ice and snow to the Chicago area, prompted the cancellation of more than 1,200 flights Saturday at Chicago’s two main airports as steady rain transition to snow by Saturday night.

Most cancellations occurred at Chicago's O’Hare International, according to the Chicago Department of Aviation’s online flight-tracking website.

The weather service issued a winter weather advisory, flood watch and lakeshore flood warning for the Chicago metropolitan area for Saturday and a winter storm warning for adjacent areas of northwestern Illinois.

High winds brought waves as high as 20 feet along Lake Michigan, forcing the closure of parts of Lake Shore Drive in Chicago as water was sent over break walls, flooding nearby beachfront areas and roadways, according to FOX32.