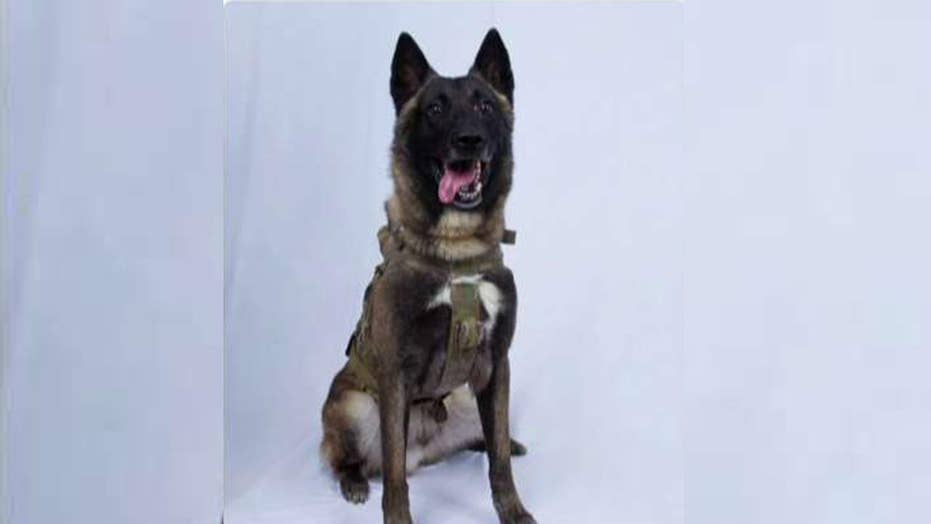 The military working dog was slightly wounded during the operation and is recovering at an undisclosed location.

Amid a U.S. military operation shrouded in mystery, the brightest spotlight has shone on the K-9 injured in the mission to take out ISIS leader Abu Bakr al-Baghdadi, with the very good boy emerging as the tail-wagging totem of a very good mission and earning praise from no less than President Trump.

Trump unveiled a photo of the Belgian Malinois on Monday, tweeting, "the wonderful dog (name not declassified) that did such a GREAT JOB in capturing and killing the Leader of ISIS, Abu Bakr al-Baghdadi!”

The dog – who was "slightly wounded" after Baghdadi killed himself by detonating a suicide vest while surrounded by three children – "performed a tremendous service," Gen. Mark Milley, the chairman of the joint chiefs of staff, said.

On Wednesday, he tweeted a clearly edited photo showing him putting a paw-shaped medal around the dog. His caption: "AMERICAN HERO!"

The various accolades foisted upon the pooch highlight the military's close working relationship with K-9s, and what goes into raising and training the reportedly 1,600 military working dogs, or MWDs, that serve alongside those on the frontlines.

"That's the kind of dog you want to lead a patrol like this," Ron Aiello, a former Marine dog handler and president of the nonprofit, told The Associated Press. "They are the first line of defense. They go out front."

German Shepherds are apparently the go-to breed, though, per the War Dogs Association, as they display several important traits including: intelligence, predictability and dependability. The animals are described as "easily trained, usually moderately aggressive and can adapt readily to almost any climatic conditions."

Where are military dogs trained?

The vast majority of MWDs trained with the 341st Training Squadron at Lackland Air Force Base in San Antonio, Texas. These animals are "used in patrol, drug and explosive detection, and specialized mission functions for the Department of Defense and other government agencies."

Dogs bred at the facility, from birth until eight weeks of age, are cared for at the AFB's Military Working Dog Center in their "state of the art whelping facility," according to the squadron's website. Development specialists work "with the pups from birth, imprinting and exposing the pups to a variety of stimulations and activities that will prepare them for the next phase of their life."

Foster volunteers who live in the San Antonio-Austin area help raise the dogs, by giving them "nurturing homes that provide learning and play opportunities, as well as outings for the puppies to be exposed to different environments and people to develop a socially sound puppy."

How are the dogs trained?

According to "K-9 History: The Dogs Of War," a website dedicated to tracing the history of the world's military barkers, working dogs are first trained by their handlers, who form a relationship with the animal through "feeding, grooming, exercise and play." After a relationship has developed, dogs undergo basic obedience training.

"The same key factors of patience, firmness, repetition, and reward and correction are applied throughout the training process," the website explains. After obedience training, the dogs enter "advanced training, which includes controlled aggressiveness, attack, and building and open area searches."

And then some even end up in a presidential tweet.