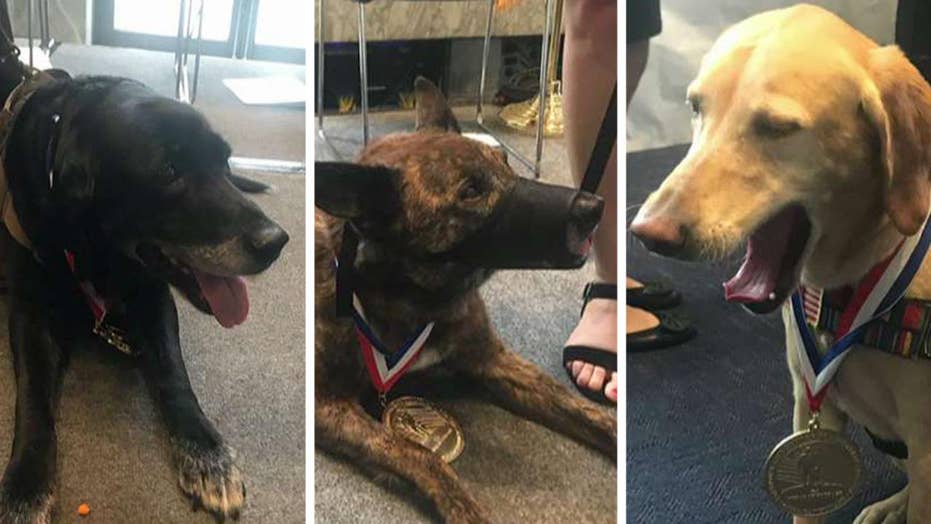 A group of retired military dogs rewarded for their numerous accomplishments while deployed overseas.

Five military dogs who served the U.S. during deployments overseas were awarded the K-9 Medal of Courage Tuesday on Capitol Hill.

The now-retired dogs — Taba, Jig, Summer, Jag and Taker — were honored with the Lois Pope award by American Humane for demonstrating "exceptional valor in serving our country" as they served in places like Iraq and Afghanistan alongside and in support of U.S. armed forces on the battlefield.

The pups worked in different branches of the military and held different roles, ranging from bomb sniffing to serving "on the frontlines of the War on Terror."

One of the dogs, Jig, served in the Marines Corps for five years detecting improvised explosive devices (IEDs) "until his career was cut short due to an oral melanoma diagnosis."

Taker, a 12-year-old Labrador Retriever "who saved countless lives" during his time with the Marines, retired in 2012. Another dog, Taba, also searched for explosive devices "and participated in countless raids" as she served as a U.S. Army Special Forces Multi-Purpose K-9.

Summer, who served with the Marines and now serves as a member of a TSA K-9 team for the Amtrak Police Department, and Jag, "a critical K-9 component in hundreds of missions protecting his fellow soldiers" until his retirement in 2013, were also honored Tuesday.

“These remarkable dogs have given us their best," Lois Pope said of the veterans. "They have put their own lives on the line to protect us, to defend us, and to save us."