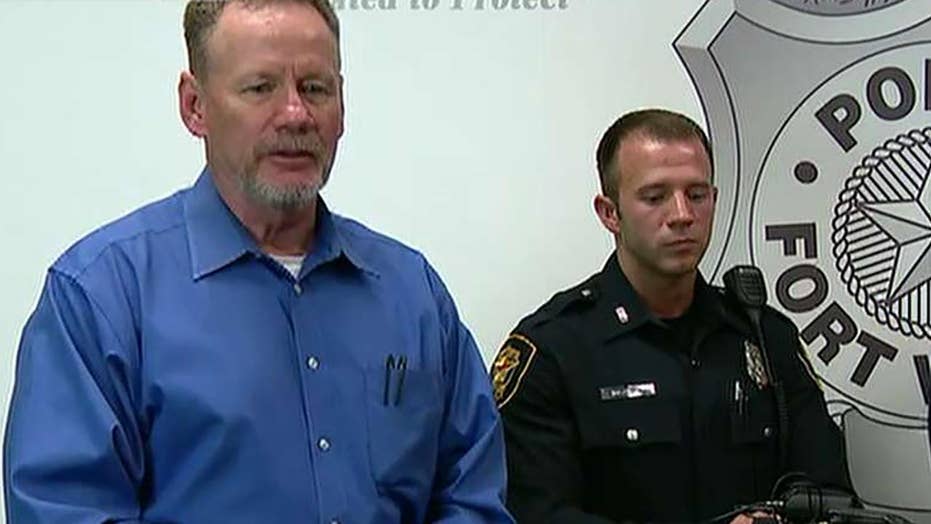 James Walker says his reserve officer training kicked in when he helped police arrest an armed man outside a bank in Fort Worth, Texas.

A Texas man may not have full sight, but that didn't keep him from seeing a law enforcement officer in need and lending a hand over the weekend.

The Fort Worth Police Department said the incident happened Saturday as officers Matthew Brazeal and David Woolbright were investigating a report of shots fired at a Wells Fargo bank.

As the officers attempted to detain the teenage suspects, the pair began fighting back. One of the suspects, who was armed, dropped his weapon to the ground during the "dangerous struggle."

"Now that a pistol is laying out, there's no telling who else is around or what’s going on,” Brazeal told FOX4. “He may try to pick it up and use it. We don't know.”

That's when James Walker, 57, was leaving the bank with his service dog, Cassie, and ended up right next to the struggle where he heard "intense conversations."

James Walker stepped in to help 2 officers who struggled to arrest 2 suspects over the weekend, including one who was armed. (FOX4)

Walker, who is legally blind now, went through police academy training and was a reserve officer for three years but never served because of his failing eyesight.

"I can see silhouettes,” Walker said Wednesday. “They didn't really need my help. They did an amazing job. But I wasn't going to walk away and let them get hurt.”

Jim Walker was recognized for helping 2 Fort Worth officers with subduing a combative suspect on Saturday. (FOX4)

Walker then jumped into action, literally, getting on top of the 17-year-old boy and sitting on his back until an officer could get up and secure the weapon.

Fort Worth police, in a statement posted to Twitter, said, because of Walker’s help, no one was hurt.

“Mr. James Walker, you were able to show empathy and concern for everyone involved. Based on your experiences and awareness, you came to the aid of officers in need by tactically assisting in the arrest process,” police said in the statement. “Two officers went home safely to their loved ones thanks to your efforts on that day. Mr. Walker, you truly have a guardian spirit, and for this, the City of Fort Worth and the Fort Worth Police Department commends you (and thanks you) for your actions.”

The suspects, a 14 and 17-year-old, were taken into custody. The department is now recommending Walker for an award, according to FOX4.