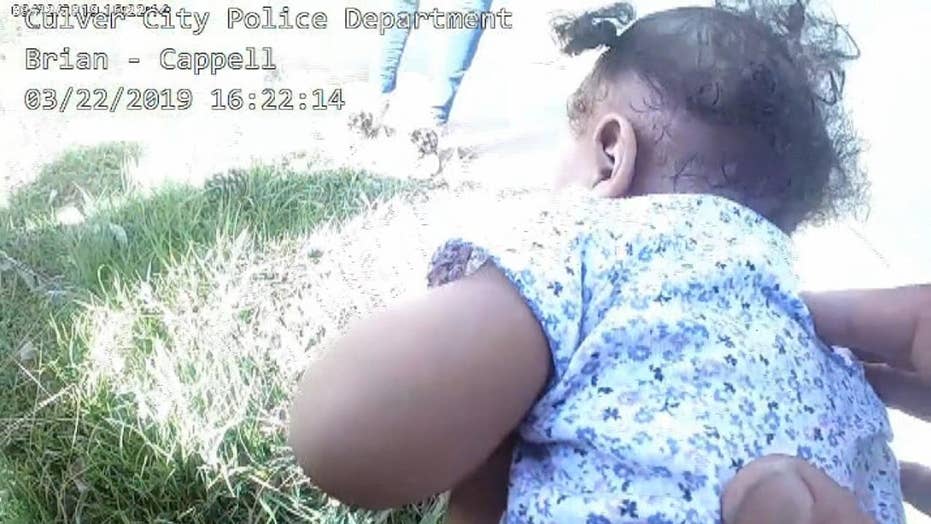 A police officer in California was recognized Monday for his heroic actions last month when he saved a choking 9-month old baby in a dramatic rescue that was captured on bodycamera video.

Culver City Police Officer Brian Cappell was first to respond on the scene on March 22 to a report of a baby who was unconscious and not breathing after choking on a snack.

Body camera footage released by the department shows the moment that Janet Lockridge's 10-year-old daughter, Auria, flagged down Cappell in the street in her pink pajamas and frantically brought him to her mother's car.

Cappell then grabbed the silent, unresponsive child, turned her over into the palm of his hand and struck her back repeatedly from training he learned until the infant let out a cry.

“It was the most beautiful cry I’ve ever heard in my life,” he told FOX11. “Going from silence to crying is an unimaginable sound.”

"It was literally like God sent his angel through him,” she said.

Paramedics and firefighters quickly arrived, as Cappell handed over Harley for treatment.

The officer was recognized for his heroism at City Hall on Monday and will receive an official award in the future.

Officials said the incident showed the importance of being certified in CPR, and have a step-by-step guide to print out and keep in wallet, car, or a first-aid kit for quick access.

The girl's mother expressed her gratitude in an interview with FOX11.

“Cherish your children’s lives and hug them right now because you might not have Officer Cappell,” Lockridge said. “I hope it does not happen to anybody else because it was the worst situation of my entire life.”