Laptop thought to be Hunter Biden's contained 'disturbing' items, repair shop owner says
The owner of a Delaware computer repair store says he was frightened by what he saw after a man he believes was Hunter Biden dropped off a laptop that allegedly contained emails detailing an opportunity for a meeting between Biden's father -- former Vice President Joe Biden -- and a top Ukrainian energy company executive.

“I just don't know what to say, or what I'm allowed to say,” Isaac said. “I know that I saw, I saw stuff -- and I was concerned. I was concerned that somebody might want to come looking for this stuff eventually -- and I wanted it out of my shop.”

Isaac said he has a condition that affects his vision and “can’t be 100 percent sure” it was Hunter Biden who dropped off the computer for repair. Isaac said he contacted the FBI out of concern, but declined to specify what he meant.

Isaac’s claim that the laptop belonged to Hunter Biden has not been confirmed by Fox News. Isaac told the New York Post, which first reported about the emails earlier Wednesday, that he determined it was Hunter Biden in his shop because the laptop had a sticker from the Beau Biden Foundation, which is named after Biden's late older brother.

Joe Biden has claimed neither he nor his son has engaged in any wrongdoing in connection with overseas business dealings. CLICK HERE FOR MORE ON OUR TOP STORY.

Dorsey was asked on the same message thread if Twitter shadow-bans some its users in an attempt to stifle their online influence due to their political beliefs.

"No," came the CEO's succinct reply.

"In line with our Hacked Materials Policy, as well as our approach to blocking URLs, we are taking action to block any links to or images of the material in question on Twitter," a spokesperson said.

The article, which Fox News hasn't independently verified, also claimed that the outlet had been given emails showing Hunter Biden had introduced his father Joe Biden to a top executive at the Ukrainian energy firm Burisma Holdings, less than a year before a top Ukranian prosecutor was forced out for looking into the matter. CLICK HERE FOR MORE. 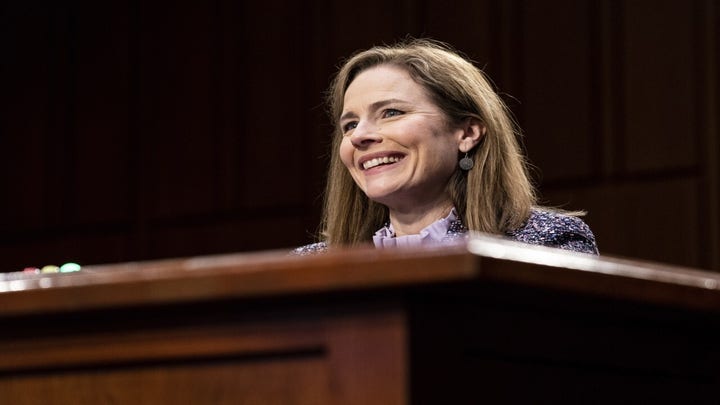 In between, a poised Barrett withstood hours of questioning from Senate Judiciary Committee members with an even temperament as she recited legal cases without the aid of notes. She impressed Republicans with her intellect while Democrats accused her of providing "distressing" non-answers.

The battle lines around Barrett's confirmation were already drawn before President Trump even announced his pick a week after the Sept. 18 death of Justice Ruth Bader Ginsburg. And despite the drama surrounding the Capitol Hill hearings this week, it appeared few minds were changed and the partisan divisions were firmly entrenched.

"Senate Democrats have not been able to do anything so far that will derail Judge Barrett's confirmation," said Neal Allen, associate professor of political science at Wichita State University. "Their arguments about a fair judicial selection process and issues like health care will likely get popular support, but the Senate is run by Republicans with support of only a minority of Americans." CLICK HERE FOR MORE. 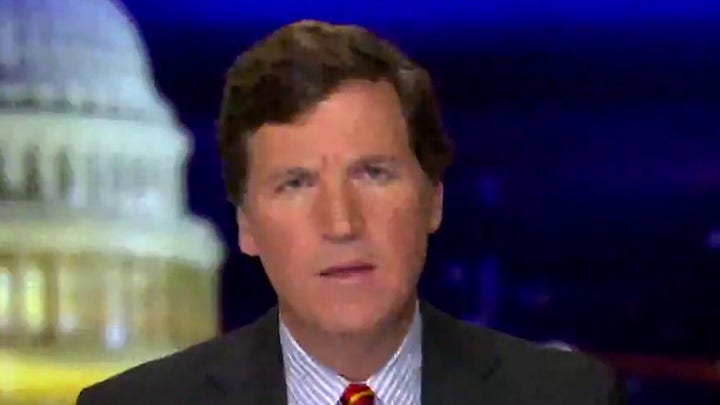 Tucker Carlson discussed Twitter CEO Jack Dorsey’s response to the social media giant’s blocking of the New York Post’s link to the Hunter Biden-Burisma story on Wednesday’s “Tucker Carlson Tonight,” after Dorsey said, “Our communications around our action was not great and blocking url-sharing via Tweet or DM with zero context as to why we’re blocking was unacceptable.”

“The Biden campaign is using Big Tech as a pretext to not responding,” Carlson said, “and Big Tech is trying to prevent you from reading it at all. If Biden is elected, do you really think Big Tech is going to stop doing the bidding of their masters in Washington? Not a chance.”