Ian, now a tropical storm, submerged a hotel pool in Sanibel Island, Florida, in under an hour, as seen in video taken by WFTX reporter Elyse Chengery.

Additionally, footage taken by Loni Architects showed the rapidly deteriorating conditions in Fort Meyers, which took a brutal blow from the storm. 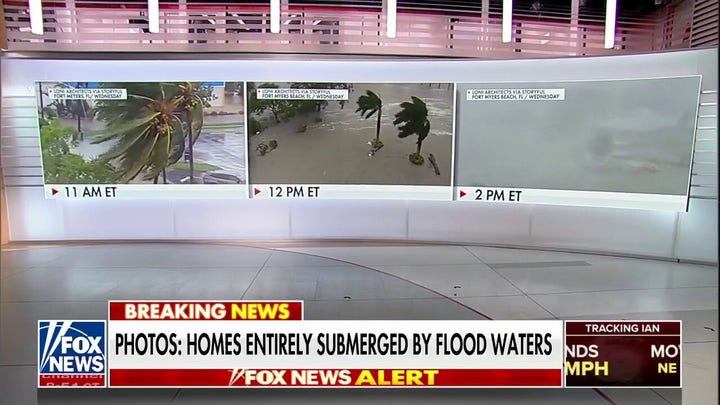 Ian destroyed a section of the Sanibel Causeway, which connects Sanibel Island and Captiva with mainland Florida, preventing all access for ground vehicles.

FOX WEATHER: WHERE IS IAN HEADED NEXT? DANGEROUS STORM'S IMPACTS WILL BE WIDESPREAD

The Sanibel Causeway is a 12-mile stretch of road that rises into a bridge connecting the island with the mainland. The bridge is the only land-access route between the two areas.

Debris litters a street in the aftermath of Hurricane Ian in Punta Gorda, Florida on Sept. 29, 2022.  (Ricardo Arduengo /AFP via Getty Images)

Operations are ongoing, with 28 large helicopters between the National Guard and Coast Guard performing rescue missions, and more air assets brought in as the day continues.