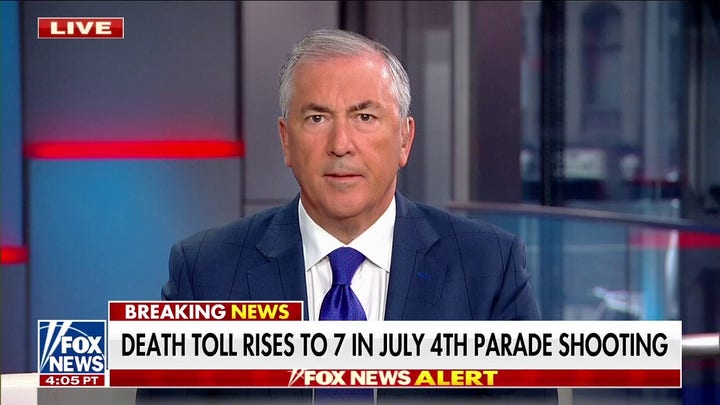 The father of Highland Park Fourth of July mass shooting suspect Robert Crimo III was arrested Friday in connection with the attack that killed seven people and wounded dozens more.

"Parents and guardians are in the best position to decide whether their teenager should have a weapon. They are the first line of defense," Lake County State's Attorney Eric Reinhart said. "In this case, that system failed when Robert Crimo Jr. sponsored his son. He knew what he knew, and he signed the form anyway."

Robert E. Crimo III's father Robert Crimo Jr., right, and mother Denise Pesina attend to a hearing for their son in Lake County court on Aug. 3, 2022, in Waukegan, Ill. Prosecutors announced Friday that Crimo Jr., the father of the Illinois man charged with killing seven people in a mass shooting at a July 4 parade in a Chicago suburb, has been charged with seven felony counts of reckless conduct.

Authorities have previously said that Crimo III attempted suicide by machete in April 2019 and in September 2019 was accused by a family member of making threats to "kill everyone."

At the time he signed the application, his son was under 21 and could not get a FOID card, and because of that could not legally purchase a firearm without his father's assistance.

In media interviews after the shooting, Crimo Jr. said he did not expect to face charges and did not believe he did anything wrong by helping his son get a gun license through the state’s established process.

Crimo III faces numerous charges, including murder, for the killing of seven people and wounding another 48 at the Highland Park July 4 parade. Authorities said he planned the attack for weeks, which sent parade goers and participants running for their lives. He has pleaded not guilty.

Robert Crimo on August 3 pleaded not guilty to 117 counts for his role in a shooting that left seven people dead and dozens injured during a Fourth of July parade. (AP/handout from Lake County Major Crime Task Force)

After the shooting, Crimo III tried blending in with the crowd and walked to his mother's home and borrowed her vehicle. He was arrested during a traffic stop.