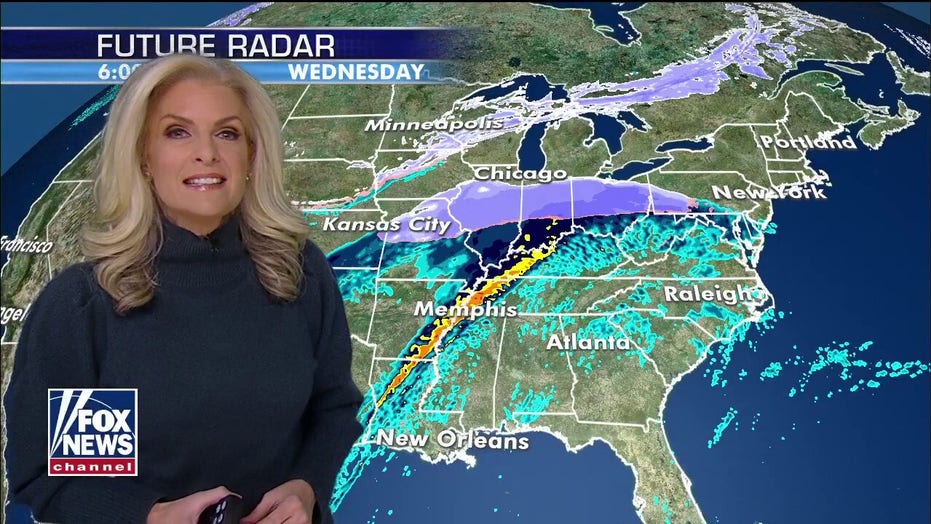 Janice Dean has your FoxCast on New Hampshire primary day.

Another round of flash flooding stretched across the South on Tuesday, as a stalled weather pattern brought a line of storms to already water-logged communities.

The National Weather Service said that several storms moving from the Southern Plains to the Ohio Valley through midweek could bring heavy rainfall and "widespread flooding concerns" as several inches of rain are in the forecast.

"As far as the rest of the country, especially across the Southeast and parts of the South, we have very heavy rain that's going to bring the potential for flooding," Fox News Senior Meteorologist Janice Dean said Tuesday on "Fox & Friends." "North of that, that's where we're going to see the snow, but the flooding is going to be the main concern, and perhaps even severe weather throughout the day."

According to Dean, a stalled front draped across the South is behind the flooding rain. As of Tuesday morning, flood warnings and flash flood warnings were reported in parts of Alabama, Mississippi, Georgia and South Carolina.

The threat of flooding remains across the Deep South on Tuesday. (Fox News)

Schools opened late or closed Tuesday in parts of Alabama, Mississippi and Louisiana because of flash flooding.

Dozens of roads were underwater in low-lying areas across the Tennessee Valley after hours of rain, and cars crept along flooded streets in downtown Birmingham. Video showed vehicles leaving wakes behind them, with waves slapping the side of a building in Yazoo City, Mississippi.

Vehicles turn around on a road blocked by floodwaters in Helena, Ala., on Tuesday, Feb. 11, 2020. (AP Photo/Jay Reeves)

The Mississippi Emergency Management Agency said that evacuations were ordered in Leake County after a levee break in the town of Carthage.

At least five homes were evacuated after water was reported in the yards on some properties, according to MSEMA.

In eastern Mississippi, officials in Starkville said the water at Oktibbeha County Lake had once again reached a critical level just weeks after heavy rains caused a mudslide that put the earthen dam in danger of failing.

Pumps had been used to lower the lake level by about 8 feet since mid-January, the Starkville Daily News reported, but the water rose again because of storms.

“I am concerned with the amount of rainfall we are expected to receive this week, we could possibly exceed the level where we were in January,” said a statement by Kristen Campanella, emergency management director in Oktibbeha County.

In Alabama, a Cullman County deputy was injured Tuesday morning in a crash as heavy rain hit the area. Officials told WBRC-TV that dispatch lost contact with the deputy and the officer's wrecked cruiser was discovered along a highway afterward.

Brad Williams with the Cullman County Sheriff’s Office told WBRC-TV the deputy was found unconscious and rushed to an area hospital, condition unknown. The deputy’s K9 was also injured in the crash and taken to an area veterinarian.

Flash flood watches and warnings stretch from eastern Texas into the western Carolinas. The Tennessee Valley Authority said some of its rivers and lakes had as much as 550 percent of their normal rainfall for this time of year.

More than 2 inches of rain fell on Monday in spots, and the NWS said another 4 inches could fall by Tuesday night. After that, potentially severe storms will move across the region, the NWS said. Parts of the region are still soggy from heavy rain last week. In north Alabama, some flooded roads remained closed.

To manage all of the water, the TVA will continue storing water in large mountain reservoirs to help reduce flooding downstream, James Everett, senior manager of the Tennessee Valley Authority's River Forecast Center, said in a briefing. The agency plans to adjust its strategy for water storage and flows depending on how much more water falls on the already saturated ground, he said.

"We're getting a brief break in rainfall today, but we expect it to pick up tomorrow through Thursday," Everett said.