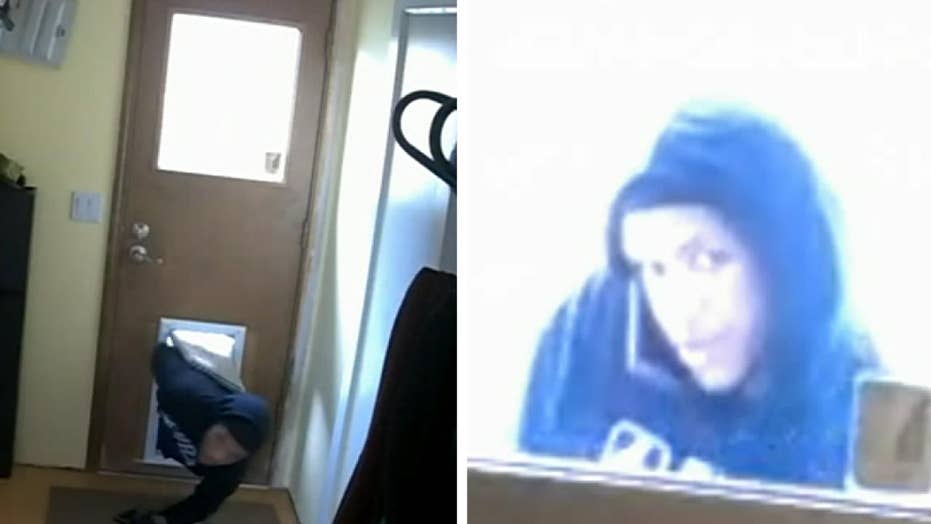 Deputies are asking for the public's help identifying a burglary suspect who used a doggie door to gain entry into a Clackamas County home last week.

It's not what the dog dragged in, but who dragged themselves in through the dog's door that's drawn the attention of authorities in Oregon.

The Clackamas County Sheriff's Office said in a news release that a burglary suspect used a doggie door to get into a home last Tuesday.

The incident happened in Clackamas around 10:30 a.m. when the man made a "brazen entry" into the home through the doggie door that was captured on a surveillance camera.

WOMAN STEALS ELECTRIC SCOOTER FROM WALMART, DRIVES IT TO WAFFLE HOUSE TO GET COFFEE, POLICE SAY

"The video clearly captures the suspect looking in the window, then entering through the doggie door," the sheriff's office said. "After the suspect realizes he's on camera, he attempts to conceal his identity by quickly pulling a hood tightly over his head and then covering the camera with a blanket."

The "Doggie Door Bandit" slipped into a home on April 2, before stealing several items, according to police. (Clackamas County Sheriff's Office)

After breaking into the home, police said the man stole several items from the home, including electronics and jewelry.

"However -- and fortunately for investigators -- the victim had a surveillance camera pointed in the suspect's direction," police said.

The suspect is described by police as between 18 and 25 years old with a medium build. The man was wearing a black beanie, black hooded sweatshirt with "NBA" in white letters on the chest, light-grey sweats, black shoes with white soles, and black gloves