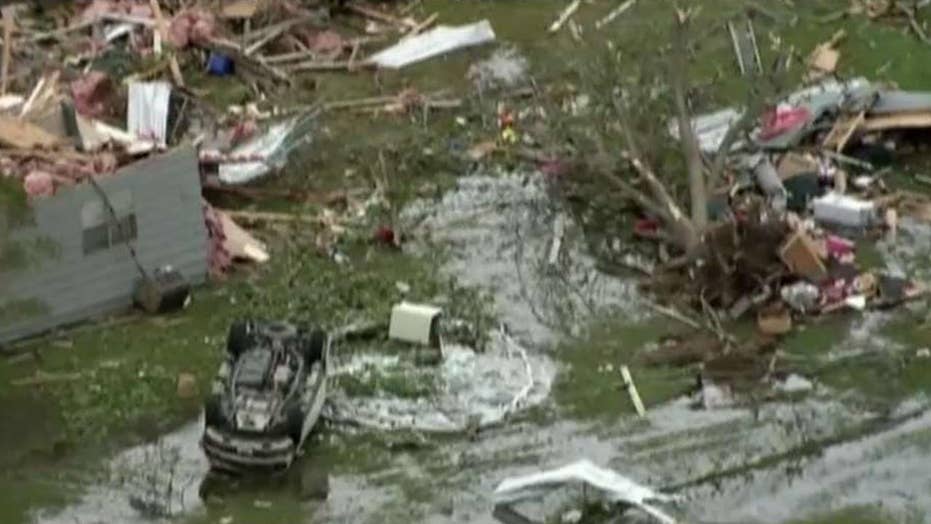 Severe weather slams states across the southern US

At least eight people — including three children — were reported dead by Sunday after powerful storms unleashed tornadoes and flooding across much of the southern U.S.

The severe weather left dozens of others injured, and roughly 60,000 people were without power as of Sunday evening in Texas, Tennessee, Georgia and Mississippi combined.

Franklin, Texas, roughly 125 miles south of Dallas, was almost entirely flattened by a tornado, according to the Robertson County Sheriff's Office.

The tornado, which was rated an EF-3 with winds of about 140 mph by the National Weather Service (NWS), destroyed 55 homes, a church, four businesses, a duplex and part of the local housing authority building, officials said.

Pollok, Texas, a little over 100 miles northeast of Franklin, saw two children, aged 3 and 8, killed by a falling tree that landed on the vehicle in which they were riding on Saturday.

The tree "flattened the car like a pancake," Capt. Alton Lenderman of the Angelina County Sheriff's Office told The Associated Press. The kids' parents made it out alive.

Mississippi saw heavy rains and flooding, and in the Vicksburg area, about a 45-minute drive from Jackson, a possible tornado touched down, according to NWS meteorologist John Moore. No injuries were reported, but officials reported damage to several businesses and vehicles.

One person was left dead during a Native American cultural event in Alto, Texas, and another person was killed in Houston County's Weches. A 95-year-old man died after a tree fell on his trailer in Mississippi and a 13-year-old in Louisiana also died after he drowned in a drainage canal, officials said.

Separately, one person died in a car submerged in floodwaters in Calhoun, Louisiana. Near the Birmingham suburb of Hueytown, Alabama, a county employee died after being struck by a vehicle while he was helping clear away trees about 2:15 a.m. Sunday, Capt. David Agee of the Jefferson County Sheriff's Office said.