"I can say one thing, the killer of JonBenet Ramsey should not rest easily, because I am still optimistic that he or she will be apprehended with technology that exists today and five years or in 10 years, the governor told CBS Denver Monday evening.

He floated the possibility of having the state’s Bureau of Investigation step in and run DNA samples as part of an ongoing review of the case, according to the network. 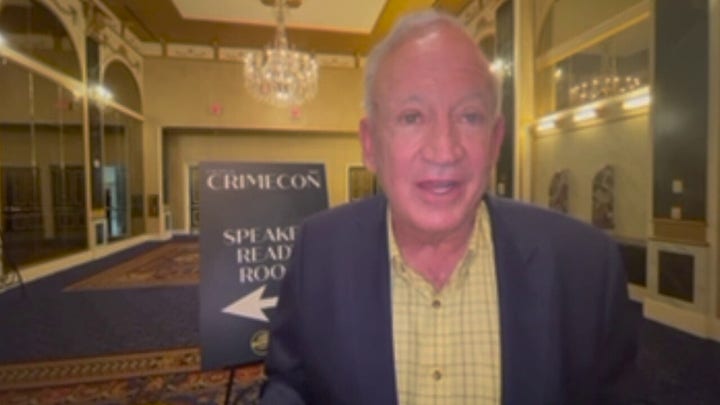 The interview followed Fox News Digital reporting that JonBenet’s father, John Ramsey, announced at CrimeCon 2022 event in Las Vegas Saturday his support for a new petition asking Polis to allow an independent agency to test DNA in the case rather than Boulder police.

JonBenet Ramsey, inset, and her father on the stage at CrimeCon 2022 in Las Vegas Saturday. (John Ramsey)

The governor’s office has reportedly agreed to "review the petition and look into how the state can assist in using new technology to further investigate this cold case and to identify JonBenet Ramsey's killer and bring him or her to justice."

Ramsey also took issue with the small Boulder Police Department’s control of the case, arguing that a larger agency with more resources should be leading the investigation. And he went as far as to call for child murder to be made a federal offense, which would involve the FBI in such cases.

JonBenet's mother reported the 6-year-old missing on the morning of Dec. 26, 1996, in Boulder, Colorado. She had discovered a lengthy ransom note demanding $118,000 in exchange for JonBenet. John Ramsey found the child's body later that same day in the basement of their home.

In this Jan. 3, 1997, file photo, a police officer sits in her cruiser outside the home in which 6-year-old JonBenet Ramsey was found murdered in Boulder, Colorado.  (AP Photo/David Zalubowski, File)

Boulder police pushed back on Ramsey’s criticism in a statement Sunday.

File image of JonBenet Ramsey a child beauty pageant queen was brutally murdered in her home in Boulder, Colorado. (Polaris/Discovery+)

"We have a shared goal to bring justice — and hopefully some peace — to JonBenet’s family and everyone who was impacted by her loss," said the city’s police chief, Maris Herold. "Our investigation with federal, state and local partners has never stopped. That includes new ways to use DNA technology. We’ve always used state of the art technology as it has been at the forefront of this investigation. Every time the DNA technology changed, we worked to make sure the evidence could be tested."

PHOTOS OF JONBENET RAMSEY JUST RELEASED BY HER FATHER:

The department says it has followed up on 21,016 tips, letters and emails and traveled to 19 states to interview more than a thousand individuals in connection to the murder since Dec. 26, 1996. The department has also worked in collaboration with federal, state and local agencies on the case and met with those officials as recently as March 2022.

JonBenet Ramsey's mother Patsy passed away in 2006 at age 49 from ovarian cancer. (AP)

Separately, the Colorado Bureau of Investigation said earlier this week that it has updated more than 750 reference samples with the latest DNA technology.