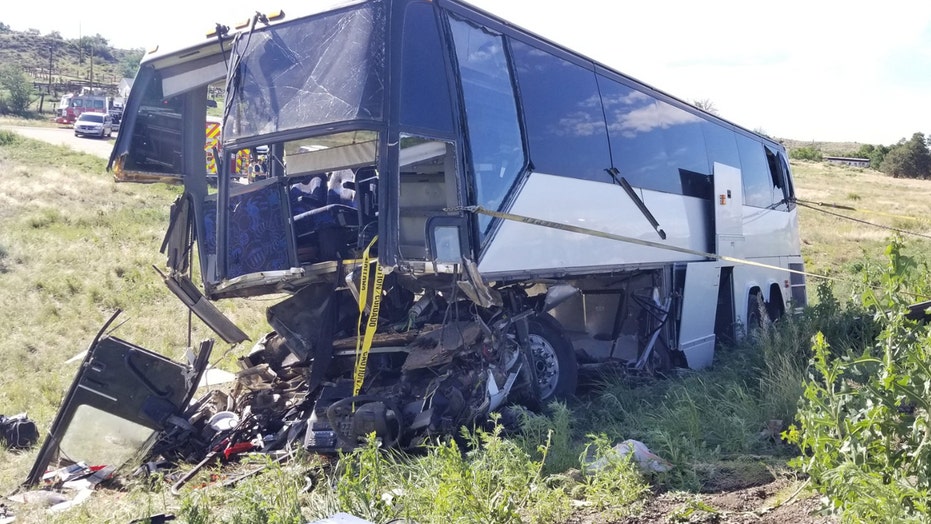 Two people were killed and over a dozen were injured when a charter bus carrying a church group ran off a highway in southern Colorado and struck a bridge support, according to officials.

The Colorado State Patrol said the crash happened around 2:40 p.m. Sunday on the southbound lanes on Interstate 25 about 10 miles north of Pueblo.

"Our condolences go out to the families of those involved in this crash," the agency said on Twitter.

The bus was carrying 15 members of a church group from Albuquerque, New Mexico when it struck a bridge structure and then veered off the side of the highway into a ditch, according to State Patrol Cpl. Ivan Alvarado.

Two people were killed and 13 were injured when a charter bus carrying a church group crashed in Colorado on Sunday. (Colorado State Patrol)

The driver, a 22-year-old man, may have had an unspecified medical issue that contributed to the crash. The driver, whose identity wasn't released, was ejected from the bus and died, according to Alvarado.

State Patrol said the 13 passengers sustained injuries that varied from minor to critical. Five people had to be extricated from the bus.

The bus was returning to New Mexico from a convention in Denver, The Pueblo Chieftain reported, citing Colorado State Police officials.

The group on board included high schoolers who were returning from a meeting from the Steubenville of the Rockies Youth Conference in Denver, according to the Archdiocese of Denver.

A charter bus carrying more than a dozen people ran off the highway after striking a bridge support Sunday in southern Colorado, killing a few people and injuring several others, a state patrol official said. (Zach Hillstrom/The Pueblo Chieftain via AP)

Three medical helicopters and dozens of ambulances were dispatched to the scene. One person had to be airlifted to a hospital in Colorado Springs, while 12 others were transported by ambulances to area hospitals.

The accident caused extensive backups in both directions of the interstate, FOX31 reported.