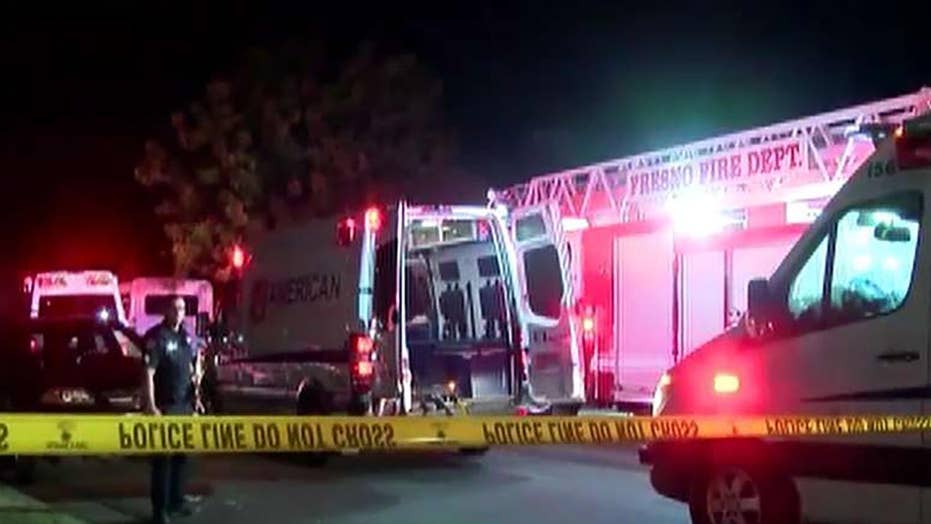 A manhunt for suspects is underway in Fresno, California after gunfire breaks out at a backyard football party.

California police are on the hunt Monday for at least two pistol-wielding suspects who opened fire Sunday night at a backyard football viewing party in Fresno, killing four people in what investigators are calling a "targeted act of violence."

The two suspects, who have not yet been identified, entered the property through an unlocked side gate around 8 p.m. before they "fired randomly into the crowd" with semi-automatic pistols, Fresno Police Chief Andrew Hall said. They struck 10 people, he added, before running off.

"This was not a random act," Hall told reporters Monday. "It appears this incident was a targeted act of violence against this residence."

Fresno police investigators at the scene where a shooting took place at a house party which involved multiple deaths and injuries in Fresno, Calif., on Monday. (AP)

When asked if he had a message for the suspects, Hall gave them a warning.

Three people were reported dead at the scene following the shooting, while a fourth died at a nearby hospital. Of the six who were wounded, two were still recovering at hospitals as of midday Monday, according to Hall. The ages of the victims -- all men -- ranged from 23 to 40.

Hall said witnesses described only seeing "flashes of light" from the gunfire as it was "too dark... to see the suspects." He added that investigators were looking into whether some attendees of the party were involved in a disturbance earlier in the week -- and if the two incidents were connected.

The party "was not described as being out of control in any way. It was just a family event," Hall also said.

Fresno City Councilman Luis Chavez, who has represented the southeast portion of the city, where the shooting took place, described it as a "senseless and criminal act."

He told the Fresno Bee, "This action is not a reflection of our community and our officers are working diligently to piece together the sequence of events that led up to this, but more importantly, to bring all those involved to justice."

Police arriving at the scene of the shooting in Fresno late Sunday. (AP/The Fresno Bee)

Investigators on scene included personnel from the federal Bureau of Alcohol, Tobacco, Firearms and Explosives.

The slayings in Fresno followed a recent wave of violence in California that has included the murder-suicide deaths of a family in San Diego on Saturday; the deaths of two high school students in Santa Clarita on Thursday plus the shooter on Friday; and the deaths of at least four people at a house party in Orinda on Halloween night.

Choua Vang, who lived in Fresno, told the Bee that gunfire targeted a nearby resident's house just the previous week.

"We're thinking about moving out of the neighborhood," he said. "We don't know how many more shootings there will be."

Earlier Sunday, a man in his 20s was shot and killed in another part of the city. Police did not say whether the two shooting incidents were related.