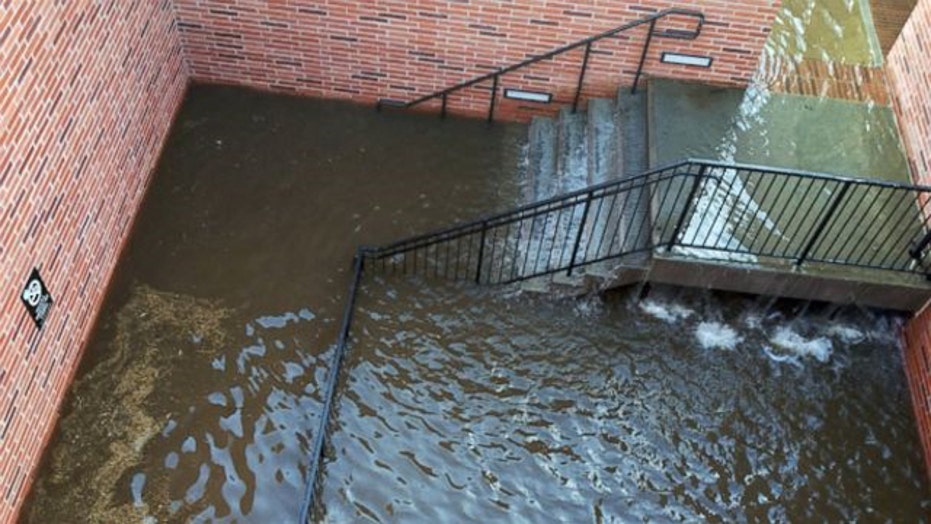 A 93-year-old water pipe burst under Sunset Boulevard in Los Angeles Tuesday afternoon, sending a geyser of water spewing 30 feet in the air and flooding parking structures and buildings on the UCLA campus, including the school's famed basketball arena, Pauley Pavilion.

Los Angeles Department of Water and Power General Manager Jim McDaniel said that the 30-inch pipe was shut off at approximately 7 p.m. local time Tuesday, three-and-a-half hours after it burst. McDaniel estimated that between eight and ten million gallons of water had been released, adding that the city of Los Angeles uses an estimated 55 million gallons each day. LADWP spokeswoman Michele Vargas had earlier estimated that the pipe carries an estimated 75,000 gallons of water per minute when functioning.

There were no reports of injuries or people being trapped by the water, though city fire officials did say that three stranded motorists were safely removed from the area. Firefighters, some using inflatable boats, have saved at least five people who were stranded in underground parking structures.

Los Angeles Fire Department spokesman Brian Humphrey told the Associated Press that people saw the water and started rushing down the stairwells to rescue their cars, and authorities had to keep them out as water rose up to the wheel wells of vehicles, many of which were stranded.

The water opened a hole approximately 10 feet in diameter in Sunset Boulevard just north of UCLA's Westwood campus soon after the main broke at approximately 3:30 p.m. Crews were caught in rush hour traffic and did not arrive at the scene until approximately 5 p.m.

On Tuesday night, at least an inch of water covered the floor of UCLA's basketball area, where Kareem Abdul-Jabbar, Bill Walton, Reggie Miller and Kevin Love starred and John Wooden coached for 10 years. The arena recently underwent a $132 million renovation that was completed in October 2012.

Beth Schoenborn, 49, and her daughter Kelly Schoenborn, 17, of Portland, were on a campus tour that was brought to a halt when the water started flowing.

Their rental car was in one of the flooded parking structures. They got to it and started driving but couldn't exit because of a dip that was blocked off by water.

"We moved it up to the highest point," said Beth Schoenborn as she stood outside the parking structure.

Patrick Huggins and Matthew Bamberger, two 18-year-olds who live in nearby Westwood, said they were having a boring summer day until Huggins' mother told them about the water.

"It was about up to my thigh, and I thought this is a good day for a little dip," Huggins said.

The two shot video of themselves diving and splashing in the badly flooded practice putting green used by the golf team.

Paul Phootrakul of the UCLA Alumni Association, who was in business attire for an evening event, took off his dress shoes, dress socks and rolled up his slacks in an attempt to wade to his car. Firefighters stopped him, saying the parking structure was not steady because of the weight of all the water.

"I was trying to move my car without getting wet so I'm presentable for this event," he said. "I definitely know that the cars on the bottom floor, my best bet, are gone or totaled. I don't have much hope for my car."