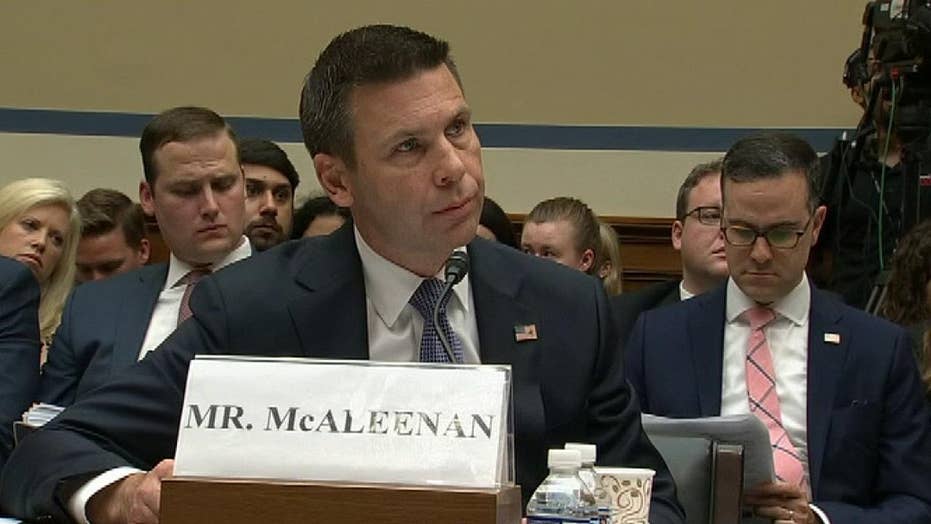 Acting Department of Homeland Security McAleenan testifies on Capitol Hill that a 51-year-old man bought a 6-month-old baby for $80 in Guatemala to pose as a family unit to get into the U.S.

A gut-wrenching photograph late last month of a father and daughter in the Rio Grande – while attempting to cross from Mexico into the United States – sharply exacerbated existing tensions over the ongoing border and migration crisis dividing Americans.

But while politicians and Presidential hopefuls expressed their outrage and pointed fingers at the Trump administration, official data indicates that Mexico-U.S. border deaths have actually declined in the first two years of the current administration.

The hand of a youth from Nuevo Laredo rests on the gate as he stops to watch a train pass, above the Rio Grande river on International Bridge 1 Las Americas, a legal port of entry which connects Laredo, Texas in the U.S. with Nuevo Laredo, Mexico, Thursday, July 18, 2019. (AP)

According to statistics compiled by the United States Border Patrol, there were 298 border deaths in 2017 and 283 in 2018, making it an average of 291 per year. The average yearly deaths under President Obama stood at 372 and 382 under the Bush administration.

However, as an analysis by National Review highlighted, Trump also likely benefitted from a drop in overall illegal border crossings, a trend that was sparked during Bush’s second term.

The bodies of Salvadoran migrant Oscar Alberto Martínez Ramírez and his nearly 2-year-old daughter Valeria lie on the bank of the Rio Grande in Matamoros, Mexico, Monday, June 24, 2019, after they drowned trying to cross the river to Brownsville, Texas. This photograph was first published in the Mexican newspaper La Jornada.  (AP)

“But the reality is that deaths at the U.S-Mexico border decreased after Donald Trump became president,” the analysis stated. “The fact remains that the totals from 2017 (298) and 2018 (283) are two of the lowest since 1999 – and there was no mass outcry in earlier years with much higher numbers.”

Indeed, the tragedy of border deaths has been happening for several decades. The highest number of border deaths on record, official data shows, was in 2005 in which the trek claimed 492 lives, seconded by 2012 in which 471 deaths were recorded by Border Patrol.