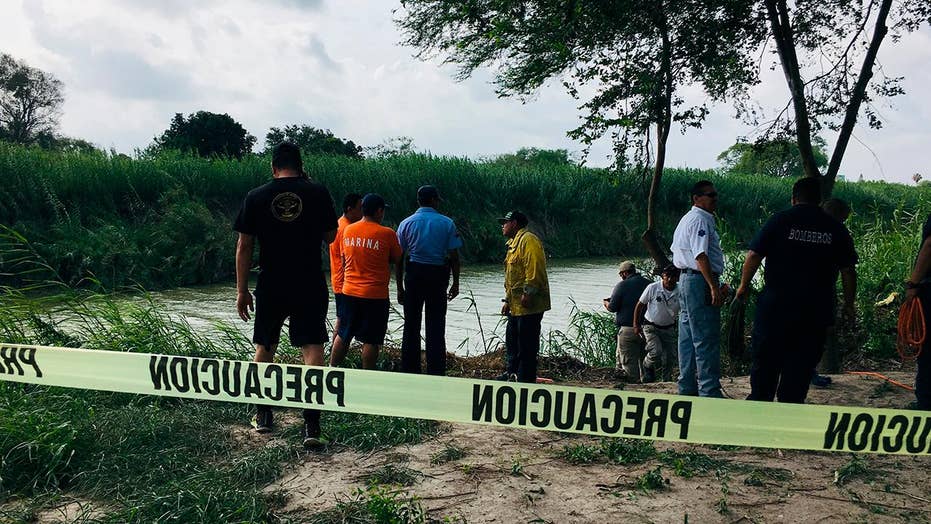 Heartbreaking images of a migrant father and 23-month-old daughter who drowned trying to cross the Rio Grande have been released by the AP.

A harrowing image of an El Salvadoran migrant and his 2-year-old daughter lying face down on the banks of the Rio Grande River in Mexico after drowning is highlighting the risks that those face while trying to enter America – and is drawing reactions from presidential candidates to the Pope.

The photograph, captured Monday by journalist Julia Le Duc and published by Mexican newspaper La Jornada, shows the bodies of Óscar Alberto Martínez Ramírez and his daughter Valeria, who washed up ashore about a half mile away from international bridge that connects Matamoros, Mexico, and Brownsville, Texas. One of the image’s most striking features is that Valeria’s arm is draped around the neck of her father.

"I was drawn to the girl's arm on her father," Le Duc told the Associated Press as she described arriving at the scene. "It was something that moved me in the extreme because it reflects that until her last breath, she was joined to him not only by the shirt but also in that embrace in which they passed together into death."

According to Le Duc's reporting for La Jornada, Ramírez, 25, was frustrated that his family from El Salvador was unable to present themselves to U.S. authorities and request asylum – and decided to swim across the Rio Grande River on Sunday with Valeria.

Tania Vanessa Ávalos of El Salvador, center left, is assisted by Mexican authorities after her husband and nearly two-year-old daughter were swept away by the current while trying to cross the Rio Grande to Brownsville, Texas, in Matamoros, Mexico, on Sunday. (AP)

He initially made it to the American side with Valeria and dropped her off there, before starting to return to help the next person who wanted to cross -- his wife, 21-year-old Tania Vanessa Ávalos.

But Ramirez’s daughter then entered the water after seeing him leave, the reporting said. Martínez returned and was able to grab Valeria, yet the current swept them both away and they drowned.

The bodies of Salvadoran migrant Oscar Alberto Martínez Ramírez and his nearly 2-year-old daughter Valeria lie on the bank of the Rio Grande in Matamoros, Mexico, on Monday. (AP)

The photographer’s account, according to the Associated Press, was based on remarks by Ávalos to police at the scene -- "amid tears" and "screams" -- Le Duc said.

Details of the incident also were confirmed Tuesday by a Tamaulipas government official who was not authorized to discuss the matter publicly and spoke on condition of anonymity, and by Martínez's mother back in El Salvador, Rosa Ramírez, who spoke with her daughter-in-law by phone afterward.

U.S. CUSTOMS AND BORDER PROTECTION BOSS OUT AMID CONTROVERSY OVER DETENTION CENTER CONDITIONS

From the scorching Sonoran Desert to the fast-moving Rio Grande, the 2,000-mile U.S.-Mexico border has long been an at times deadly crossing between ports of entry. A total of 283 migrant deaths were recorded last year; the toll so far this year has not been released. Many attempt the dangerous journey to flee poverty and violence in their home countries.

Rosa Ramirez sobs as she shows journalists toys that belonged to her nearly 2-year-old granddaughter Valeria in her home in San Martin, El Salvador, on Tuesday. (AP)

In recent weeks alone, two babies, a toddler and a woman were found dead on Sunday, overcome by the sweltering heat; elsewhere three children and an adult from Honduras died in April after their raft capsized on the Rio Grande; and a 6-year-old from India was found dead earlier this month in Arizona, where temperatures routinely soar well above 100 degrees Fahrenheit.

Tamaulipas immigration and civil defense officials have toured shelters beginning weeks ago to warn against attempting to cross the river said to be swollen with water released from dams for irrigation. On the surface, the Rio Grande appears placid, but strong currents run beneath.

El Salvador's foreign ministry said it was working to assist the Ramirez family including Ávalos, who was at a border migrant shelter following the drownings. The bodies were expected to be flown to El Salvador Thursday.

"Very regrettable that this would happen," Mexican President Andres Manuel Lopez Obrador said Tuesday in response to a question about the photograph. "We have always denounced that as there is more rejection in the United States, there are people who lose their lives in the desert or crossing" the river.

Rep. Hurd says border facilities that are not designed for detention are being overwhelmed

The U.S. asylum system needs to be streamlined, says Texas Congressman Will Hurd, Republican member of the House Appropriations Committee.

Pope Francis, after seeing the image, was “profoundly saddened by their death, and is praying for them and for all migrants who have lost their lives while seeking to flee war and misery,” the Vatican said.

Jessica Vaughan, an official with the Center for Immigration Studies, told Fox News that while the photo is “heartbreaking,” lawmakers and activists need to shift their focus on working toward reducing the flow of migrants coming to the U.S.-Mexico border.

“Of course we should provide adequate care to migrants who come into our custody, but the real goal must be to end the policies that are encouraging people to make the dangerous choice of trying to come here illegally,” she said.

“Specifically, we need to work with Mexico and the Central American countries to discourage the illegal migration, as the Trump administration has done, but we also need to negate the judge’s ruling that requires the government to keep releasing anyone who crosses with a child… so that people in their home countries see that this is no longer an option worth risking their lives for,” added Vaughan, who is the center’s director of policy studies.

The image also drew reactions from Democratic presidential candidates gearing up for a 2020 election season in which immigration is expected to be a key issue.

“These families seeking asylum are often fleeing extreme violence. And what happens when they arrive? Trump says, 'Go back to where you came from.' That is inhumane. Children are dying. This is a stain on our moral conscience,” Sen. Kamala Harris tweeted.

“Trump is responsible for these deaths,” added Beto O’Rourke in another tweet.