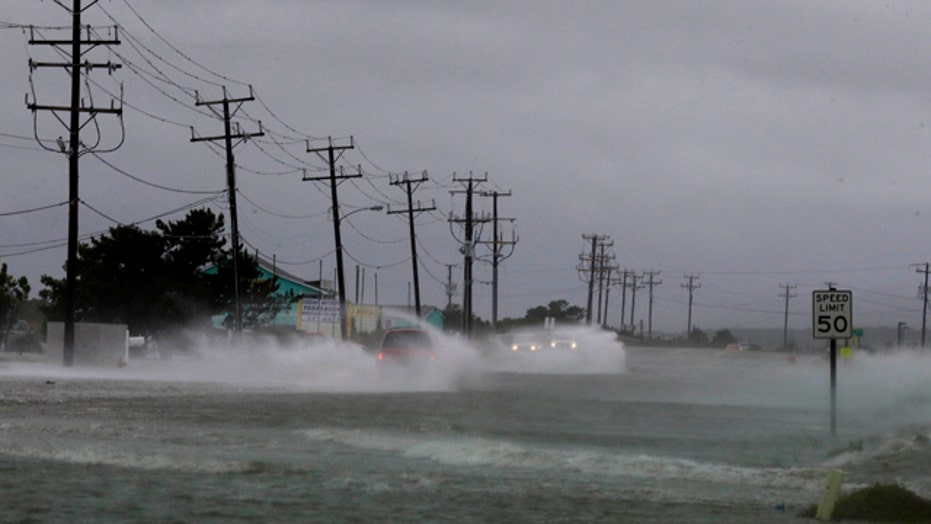 Hurricane Arthur has weakened to Category 1 storm in the Atlantic after bringing flooding and power outages to North Carolina's Outer Banks overnight.

As of 7 a.m. Friday, Arthur was centered about 65 miles east-northeast of Kitty Hawk, North Carolina, and 95 miles east-southeast of Norfolk, Virginia. It was moving northeast near 23 mph and is expected to dump rain along the East Coast as it travels north.

Meanwhile, a new tropical storm warning was issued for Nova Scotia in Canada, where Arthur is expected to head as it moves northeast.

Power companies estimate about 44,000 were without power across the Carolinas early Friday.

"We're most concerned about flooding inland and also storm surges in our sounds and our rivers further inland," North Carolina Gov. Pat McCrory said Thursday. An evaluation of storm damage would have to wait until after the sun rose Friday, McCrory said.

Jesse and Carol Wray could see outside their home in Salvo on North Carolina Highway 12 that the road was submerged under several feet of water Friday morning. The six-foot-tall lamppost at the end of their driveway was under water except for its top, and that was after the sound a quarter-mile away receded several feet since first light, said Jesse Wray, 69, a retired Norfolk, Virginia firefighter.

"I'm surprised that it got this bad. There's all kind of debris floating around here. I know a lot of people who lost their houses around here" if they were built on the ground instead of elevated, Jesse Wray said. Wray's home is on pilings nine feet off the ground and avoided water inside.

"It looks kind of rough," he said.

Thousands of vacationers in North Carolina were forced to flee the coast as heavy rains and winds were expected to pound the state's popular and flood-prone Outer Banks into Friday. The Banks, a 200-mile string of narrow barrier islands, is home to about 57,000 permanent residents.

Before the storm hit, tourism officials had expected 250,000 people to travel to the Outer Banks for the holiday weekend. McCrory warned people not to risk their safety by trying to salvage their barbecues and pre-paid vacations.

Carol Dawson, who owns two motels and a store at the Hatteras Island village of Buxton, told the News & Observer of Raleigh that the hurricane brought dread and deja vu.

“This is a badly needed weekend for the businesses here," she said. "For three straight years, we’ve lost the entire fall season."

Arthur, the first named storm of the Atlantic season, prompted a hurricane warning from the southern North Carolina coast to the Virginia border. Tropical storm warnings were in effect for coastal areas as far north as Cape Cod, Massachusetts. A tropical storm watch was in effect for Nova Scotia in Canada.

The annual Boston Pops Fourth of July concert and fireworks show were held Thursday night just before of a heavy downpour from Arthur, while fireworks displays in New Jersey and Maine were postponed until later in the weekend.

Commanders at Seymour Johnson Air Force Base in Goldsboro, about 150 miles from the coast, sent four KC-135R Stratotankers and more than 50 F-15E Strike Eagles to another base near Dayton, Ohio, to avoid the risk of damage from high winds.

Click here to read more from the News & Observer.