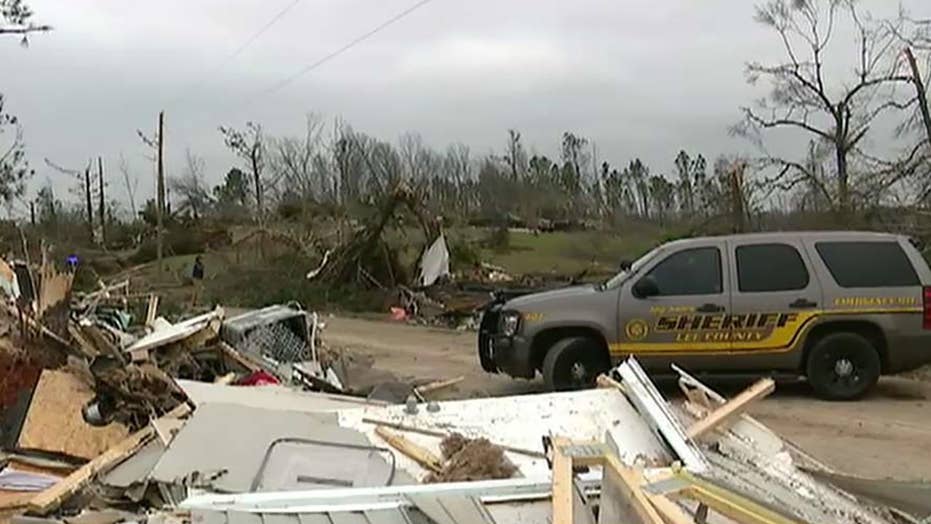 Children are among the 23 victims after a tornado tore through southeast Alabama; Jonathan Serrie reports from the scene in Lee County.

The fierce 170 mph winds of the EF4 tornado that blasted southeastern Alabama on Sunday -- leaving at least 23 people dead -- were so strong they sent a billboard sign flying into a neighboring state.

The Lee County Flea Market said in a Facebook post the billboard sign located at the Buckwild Saloon in Smiths Station, Alabama wound up in someone's yard in Hamilton, Georgia, located 20 miles away.

The woman who found the sign shared photos of it on her property, saying she was shocked.

The Lee County Flea Market sign ended up in a yard in Hamilton, Georgia, located 20 miles away from the billboard it was located on. (Sharon Bruce Treadway Smith)

"I can't imagine how a sign this big could travel 20 miles during a terrible storm...slightly tattered and land on our property," Sharon Bruce Treadway Smith wrote in a Facebook post. "We got a call from my father-in-law that lives next door and couldn't believe it!"

The sign was located along U.S. 280 in Smiths Station, which was in the path of the tornado that created a trail of destruction in Lee County, Alabama that stretched about 24 miles.

The sign was located along U.S. 280 in Smiths Station, Alabama. (Google Street View)

National Weather Service meteorologist Chris Darden said at a news conference on Monday the "monster tornado" was the deadliest twister to hit the U.S. since May 2013, when an EF-5 killed 24 people in Moore, Oklahoma.

Tornado survivor on massive twister that ripped through her community: It sounded like a train

The National Weather Service says an EF4 tornado with winds of 170 mph touched down in Lee County, Alabama; Liz Hickman describes riding out the storm with her grandchildren.

The storm's toll stood at 23 people dead in Beauregard, a rural community of roughly 10,000 people near the Georgia state line.

"It looks almost as like someone took a giant knife and just scraped the ground. There are slabs where homes formerly stood," he said Monday.

Debris litters a yard the day after a deadly tornado damaged a home in Beauregard, Ala., Monday, March 4, 2019. (AP Photo/David Goldman)

"I'm not going to be surprised if we don't come up with some more deceased. Hopefully, we won't," Lee County Coroner Bill Harris told a news conference. He said the dead included almost entire families and at least three children, ages 6, 9 and 10. A post on the Lee-Scott Academy's Facebook page identified fourth-grader Taylor Thornton as being among those killed.

The Sunday tornadoes were part of a powerful storm system that also slashed its way across parts of Georgia, South Carolina and Florida.

Gov. Brian Kemp declared a state of emergency for three Georgia counties — Grady, Harris and Talbot — after more than 20 homes were destroyed by the violent weekend storms. Kemp told reporters at a news conference that Georgia had "thankfully no fatalities. Most of the injuries are not too bad. So we're blessed by that."