They say Santa's belly shakes like a bowlful of jelly when he laughs. And if that's the case, St. Nick's stomach was convulsing overtime betwixt his festive suspenders this season.

Take a look at some of these silly Christmas stories from the last month and see if you, too, find yourself jiggling like a dish of gelatin.

The most festive pothole in America

One Pennsylvania town found a cheery fix to a pothole problem that had been plaguing their neighborhood: Put a Christmas tree in it.

Wilkes-Barre residents had been dealing with the pothole, which had gotten bigger over recent weeks, when Marietta Spak decided to do something about it.

"I was upstairs in the attic and was looking for more Christmas decorations and thought, 'That would look nice in the hole,'" said Spak to Fox 43.

Officials later placed a metal slab over the pothole until a permanent fix could be enacted.

A woman in England needed rescuing from the local fire department after falling through the attic ceiling while searching for Christmas decorations.

Stacielea Doran, 30, had initially called for her partner Nicki, to ask her to call up emergency services, but that’s not how things played out — at least at first.

“When [Nicki] came out and saw me she just laughed. Rather than helping me she took pictures," Doran said.

A few weeks before Christmas Day, millennials — and those looking to poke fun at millennials — began posting silly #MillennialChristmasTraditions to Twitter, taking aim at their love for avocado toast, vaping and man-buns.

Some of the more biting jokes — from millennials themselves — referenced their own less-than-ideal financial situations.

“Holiday shopping at the dollar store, cuz that’s all you can afford,” one user wrote. 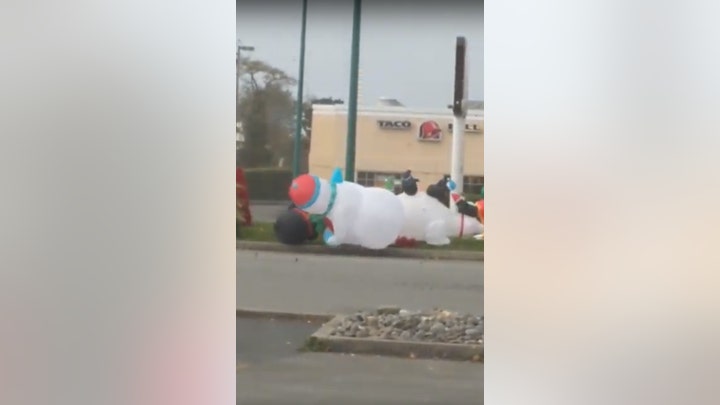 Two inflatable snowmen got into a “serious brawl” in front of a fast food restaurant in Oregon — or at least it appeared that way in a funny video to YouTube Dec. 14.

High winds caused the large Christmas decorations on display outside a Taco Bell in the coastal town to topple over and blow around, appearing as though they came to life that day — and hated each other’s guts.

Work is stressful enough as it is, but things get even more intense when you add a Secret Santa gift exchange to the mix.

According to an anonymous post on Reddit, one mother allegedly reached out to her Secret Santa to say thank you for the presents, but also to ask for another one.

The woman had allegedly Googled the gift she got, and felt it didn’t cost as much as the pre-set spending limit dictated. The woman and her Secret Santa reportedly texted back and forth, with the argument getting more heated — and the woman asking for a $120 Samsung Galaxy tablet — before it ended with the Secret Santa refusing to give her anything else.

Eyebrows not festive enough? Simple fix! Just glue a bunch of baubles and glitter to them. Problem solved.

The “Christmas Tree Eyebrow” trend originally made headlines in 2017, but came back for round 2, with beauty bloggers and face-based fashionistas achieving the look by combing, dyeing and decorating their brows into festive works of art.

Similarly, Decembeards and #Beardlights came back to grab the spotlight, with at least a few taking part in the trend and decorating their facial hair.

Is it really Christmas if the smell of fried chicken isn’t wafting from the yule log? Well, yes. Of course it is, but don’t tell KFC.

In mid-December, the chicken chain debuted its very own KFC-scented Enviro-Log — said to smell like the Colonel’s signature blend of 11 herbs and spices once it gets going — and the item sold out within hours.

“At KFC, we have always been proud of our role in bringing loved ones together at the dinner table around a bucket of our world-famous fried chicken,” the chain announced the day of the debut. “Now, this winter we’re bringing all the things we love – family, friends and fried chicken – together around the fire with our scented fire log,”