Working in cable news can be very stressful and challenging sometimes. OK — all the time. It feels like you're trying to drink from a firehose of an insane news cycle. And often, the news itself is disturbing — mass shootings, terror plots, natural disasters.

Giving Spike a quick scratch by his ears or belly rub, though, can often lower my blood pressure almost instantly. I can feel it.

There is a pretty steady parade of fellow producers and tech crew and anchors at work who ask, "Can I pet Spike?" I usually say yes if I can see they are having a stressful day, and they let me know how much they appreciate him. "Thank you, I needed that,"  or, "I feel so much better," they tend to say.

SEE HIM: JOSIAH THE WONDER DOG LENDS A HELPING PAW TO THOSE IN NEED

Now imagine the stress of a child who has to testify in court because they were the victim of physical and/or sexual abuse. I can’t imagine how terrifying that must be; It makes my stomach hurt just thinking about it. And yet thousands of children every year have to go through that ordeal.

A trained service dog can be so helpful to these children, calming them down while they tell horrific stories of their abuse. Sometimes even in a courtroom with their abuser present.

One of these dogs recently made national news.

Raider, a facility dog with Canine Companions for Independence, works with the Corona, Calif. police department to provide compassionate support for those impacted by traumatic events or crime, supporting the vulnerable victims as they navigate the criminal justice system. He’s the first and only resource of his kind in Riverside County, home to 2.4 million people.

“Raider is able to utilize the expert training he received from Canine Companions for Independence to sit quietly at the feet of children or adults who have to recall painful details in front of a room full of strangers," explained Erin Lennox, one of his handlers. "We quietly place Raider in an ‘under’ on the stand and let him do his work. He is an intuitive pup and we have watched as small children have gently placed their feet on our sweet boy and held onto his vest companion lead as they spoke about traumatic experiences.”

HOW TO TRAIN YOUR DOG TO LIKE BEING GROOMED

Raider worked with the Turpin children out of California who were abused and tortured by their parents and held captive in their home. The Turpin children played with Raider as they went through various legal settings.

California passed a law in 2017 that allows trained service dogs to accompany witnesses while testifying, and one of the children asked if Raider could be with them in the courtroom at their parents’ sentencing hearing. He quietly sat by two of them as they took the stand to testify about how their parents abused them. 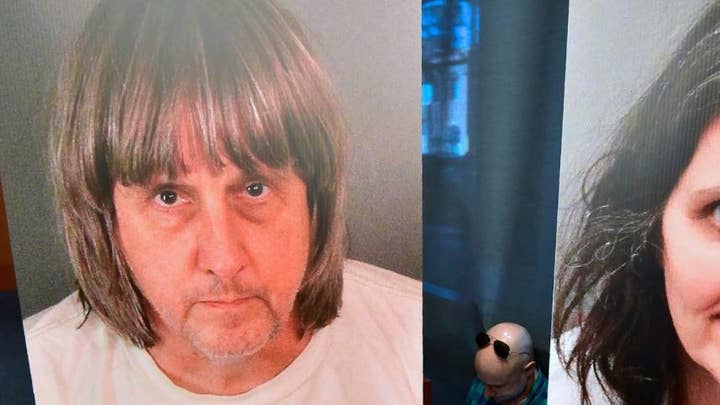 Meanwhile, in Colorado, Pella is the first courthouse facility dog. Also trained by Canine Companions for Independence, she meets with victims and their families at various stages of the legal process — all the way through courthouse testimony.

Some defense attorneys have protested the use of these canines in a courtroom as they feel the mere presence of a dog could make the witness more sympathetic and influence the jury or judge.

Earlier this week, however, Colorado Gov. Jared Polis signed into law a bill, affectionately known as the “Pella Law,” that allows a court facility dog to be present while a witness is giving testimony in Colorado.

Similar to California’s law, this will streamline the process to ensure that any victims and witnesses have the option of having a trained facility dog by their side during stressful and traumatic testimony.

Pella is seen here in 2016 with one of the children who helped train her, as well as handler Amber Urban. (Joe Amon/The Denver Post via Getty Images)

Urban proposed the bill through her office and testified about it as it went through the House and Senate in Colorado. Urban and Pella were at the bill signing, along with Denver District Attorney Jason Kramer, who also works with a Canine Companions facility dog named Rylan.

These are very exciting developments. As Uban said about Pella, “She provides comfort and friendship in a system where those things don’t typically exist.”

Hopefully, more of the country will see how dogs like Pella can make a difference.

To learn more about Canine Companions for Independence, visit CCI.org.